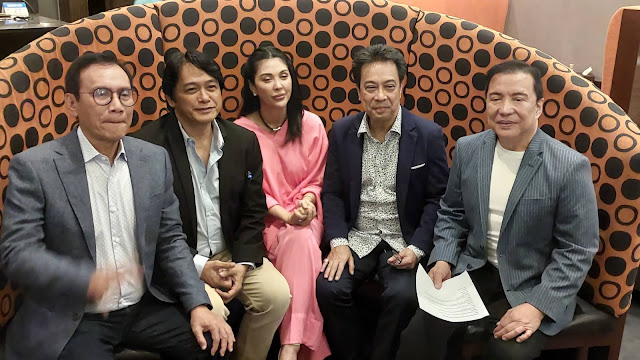 Legends of their own right, deserving of the accolades and love they receive from their fans, these singers, songwriters who ruled the 70's and 80's just came back from a successful concert in the US to perform in the Newport Performing Arts Theater for the home crowd this time. Hadji Alejandro, Rey Valera, Nonoy Zuniga, Marco Sison and the one and only Pops Fernandez will do their 4 Kings and a Queen Concert this coming August 26 and 27 in this venue. They had small mishaps in the US tour when some of them tested positive before they had to do the Vegas show. It took them a few days to recoup and do the concert for the same or even bigger crowd later on at the same state.

Nonoy Zunigaa says “I had complete vaccines and boosters but I tested positive for COVID and had to move the show in the states. Plus there are different variants in the US so if you had one you might have the others too.I’m glad to see that the US tour was almost all FULL HOUSE. They went there to enjoy and lots of people refunded tickets but when the actual day came, tons of people appeared even walked in. I’m glad people appreciate our jokes, we know each other too much even if they are concerned for me because of jokes. But we’re good.”

Marco Sison says “We have never performed in two years, it was a little hard to do concerts but the US opened up early, you can feel the excitement of the people. Even if it was cold in San Francisco, you can feel the love and support of the Filipinos. The first one was awesome and even our first few shows were sold out.”

Rey Valera says “Don’t get me wrong but people I know in the Philippines were all dying, I was asking myself if I’m gonna be next. I told the fans in the US to just enjoy the moment because they were lucky that they got the concert happen in their state. They say we are the most politically incorrect group of people and we don’t even talk about bashers. Our humor is different because we often talk about ourselves, we haven’t talked about the audience YET, but maybe if we don’t have anything to talk about we will lol.”

Pops says “I was really happy, music is powerful because it can give us a lot of joy, bring us back in time and some of them even cried. Through our songs, they remember moments, and see something live, it brings a lot of memories. We enjoyed because there are a lot of people, sometimes we forget that our songs affect people, plus the wonderful spiels of these innocent men. Thank you to Newport because when they knew we had shows in the US they got us there. It’s not easy to produce shows these days because people might be a little afraid to go out. Thank you to those who believe in us and different artists because it’s a challenging time, and I’m happy we have been successful, thank you to producers and people who believe in us. What we will be bringing in Manila is the same show but since this is home, we will put a lot extra in production. You need to see it because it’s a little bit of everything, it’s a surprise. This is going to be so fun I promise.”

Hadji says “After two years, this is a grand reunion of sorts, we were like barkadas catching up with stories. Cliche as it may sound, but with this group, you just build it and they would come. Our generation may come in wheel chairs and dextrose, but they will go to the venue and enjoy it. It’s a happy feeling to see them come because of the songs, and sometimes because of time constraints it’s a little tough to squeeze in all the songs because it’s a lot. But our top hits will be there, so you’ll have a good time with us there! We will have duets, quintets, a medley of love songs from the 70’s and 80’s, a little boring from Rey Valera but it’s good. We don’t have Rico J anymore but we got his spunk, it will be clean fun. I remember Rico had nuns and priests walk out but with mine, there won’t be anything like that.”

Tickets are sold at the venue or Ticketnet and SM Tickets. If you're raring to reminisce the good old times, the 4 Kings and Queen would want you to be there.