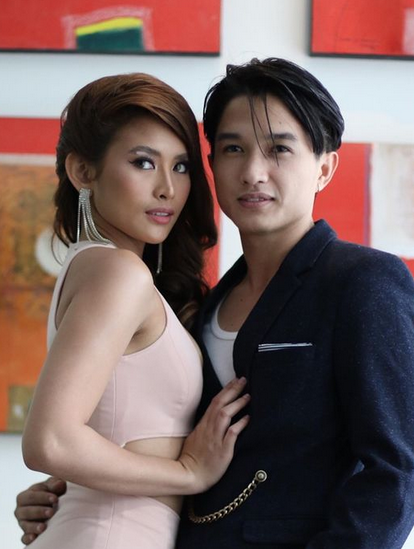 Blessed beyond his wildest dreams, that's what Gold Aceron describes his year. He's already done several indie films in the past that has landed him with acting awards, and trust from the producers, patrons who have noticed his work and acting prowess. This afternoon, we got to talk to him about his new movie Scorpio Nights 3. It's hailed from the classic 1985 movie created by Director Peque Gallaga written by T.E. Pagaspas which starred Daniel Fernando (now the Governor of Bulacan).

Gold Aceron used to work independently without a manager, but when he was booked to act in a music video, he was noticed by Kean and Chynna Ortaleza Cipriano who owns OC Records. He became their first managed actor after that. All he wanted to have was something simple, a slew of projects that would be able to alleviate his financial woes, so he could provide for himself and his family. He's practically done the legwork already, and he deserves the success he's having.

In the film he's playing the role of Matt, a young man discovering his potential in the "makin love" department. He fancies Pinay, a married woman played by Christine Bernas. Things will get complicated as Mark Anthony Fernandez' role as Drake (her husband) would find out later on about the illicit affair they're having which all started from a simple peephole.

Here's what happened earlier during the press conference:

Gold says "I was extremely happy when this project was mentioned to me. This is a classic movie, my parents knew it and I wasn't really informed first about who was going to comprise the role of the lead guy. They told me that I was going to be part of it, I was overwhelmed, even if I was a little nervous because my body wasn't as big as Daniel Fernando's back then, I was thankful this was really given to me. I watched the first one, I didn't have qualms about it being a little risky. OC Records really changed my career path, I feel lucky being in this management, they are a huge blessing for me because they really guide where I would go. They also mentioned I'd be singing soon, I'd like to explore that someday, why not, that's additional talent for me. I want to show people that this happens in real life, you'll learn something from Matt and how he explores this life. I'd love to do different roles, I also am doing a May-December affair movie soon, it's going to be this year too."

He adds "If I'd be able to choose, I want to be rich rather than famous so I can still go out whenever I want to and not be limited to stay at home. I want to go to malls without people recognizing me, just enough so I could provide for myself and my family."

If you would like to see the film Scorpio Nights 3, it's already available at the VIVAMAX platform which you can download in the App Store or Google Play. Thank you to OC Records for the opportunity to interview Gold earlier today!