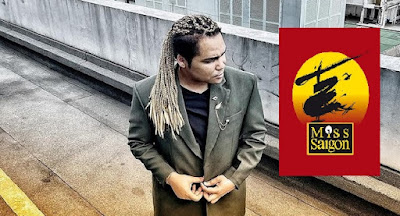 This particular achievement is something that hits close to home with Kapuso artist Garrett Bolden, The man who has succeeded to get a flourishing career in singing on The Clash, several GMA shows, here and abroad is now going to play the role of John Thomas, Chris' best friend in hit musical Miss Saigon.

He auditioned for this role and sent a video performance of Bui Doi, which means "A Dust of Life", a term used for babies born in Vietnam who have fathers in US Army/Navy/Airforce service. This wasn't something he expected to happen but once he got a call, he did several auditions and got the role later on. For those who don't know, Garrett Bolden is also a son of a GI, sadly, his Father and Step Mom passed, but glad he now has communication with his siblings that could tell him about their lives.

"When I looked back at my audition, I thought I wasn't going to get the role. When they told me I got it, I was nervous, this is a dream for me. First off, thank you for spending time with me today. You have all been part of my journey, our kapuso here and in Guam. For now I'll be doing a single that will be released soon on GMA Music, you can download Pwede Pa Ba on streaming sites. Let's see each other soon!"

Here's a part of the interview we had with him this afternoon:

Congratulations Garrett Bolden! Break a leg in September when the musical starts. He's leaving August 5 for rehearsals and this will surely change his life. This surely hits close to home with him, and I hope his story inspires more people.