A Touching Birthday with Kristofer Martin 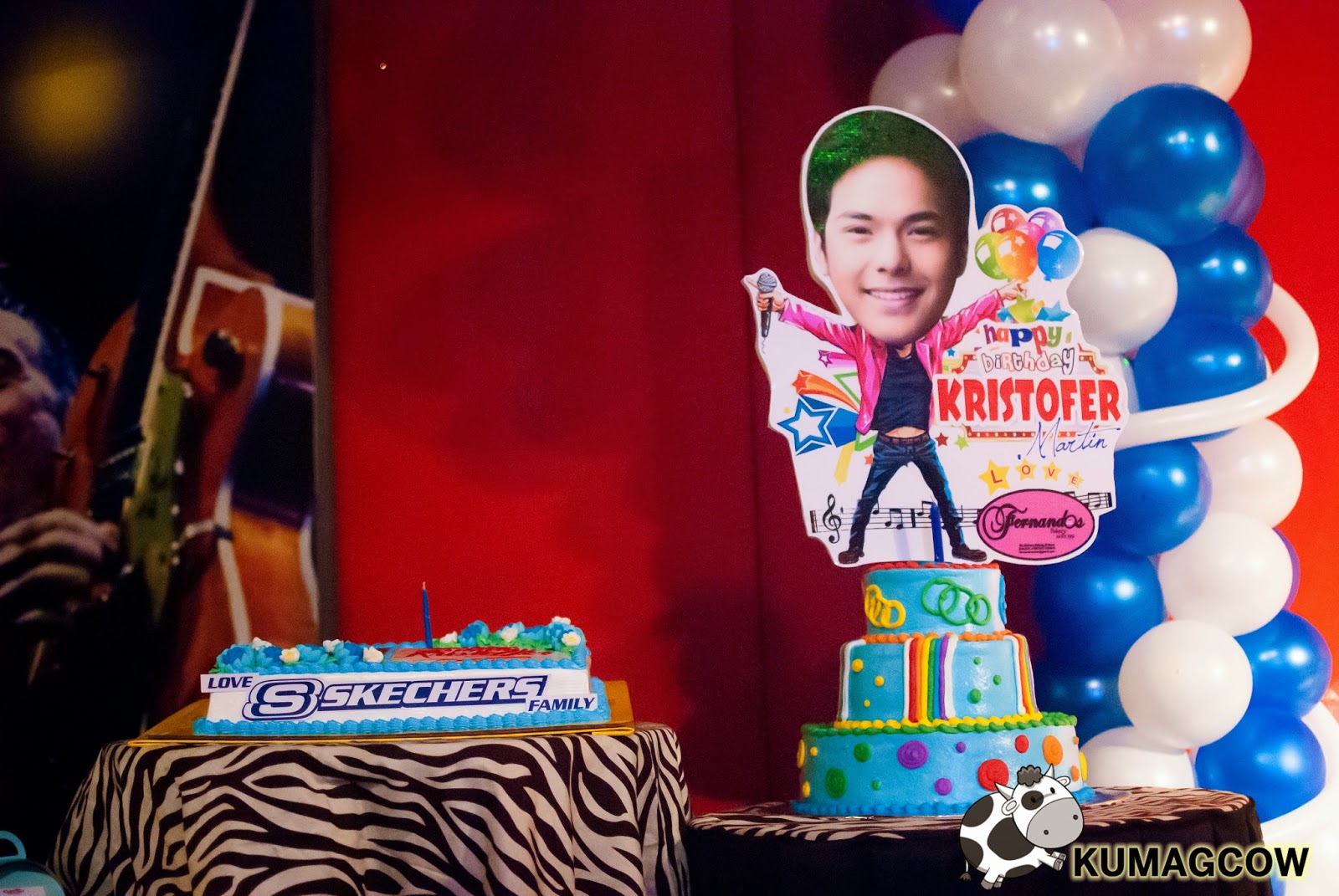 It's been a few days since this happened. Kristofer Martin, star of GMA shows such as Endless Love, Tween Hearts, Munting Heredera, Pahiram ng Sandali, Kakambal ni Eliana, Kahit Nasaan Ka Man and Sunday All Stars just turned 20. He hasn't actually made any arrangements and was already on a grumpy mode because he thought nobody remembered it was his birthday. His handler, his Mom and Dad went with him to a contract signing because they told him someone was interested to get him as endorser. With that in mind, he was already having resentments because he's got no party happening that day, no simple dinner, no gifts, no people. Then when he got to Centerstage, he got surprised big time by GMA Artist Center!

Kristofer was so happy to see some of his closest fans in attendance. Tess Bomb hosted the show and the crowd had fun with her antics. She teased Kristofer and played with his fans too. Then while the program was running, they asked Kristofer to sing on stage. Since Centerstage is a place for Karaoke, they had all the newest tunes and everyone could pick a song and sing in front of the stage just for kicks. Kristofer made sure his fans were kept happy too by giving away stuff from his sponsors Unisilver Time, Hammerhead, YSA Botanica, Meister Watch (who gave him a brand new spanking watch!) and Candy Club. Fans were there since afternoon and was part of the surprise, Kristofer saw how much they loved him so he did sing a couple of songs, but in the middle of that, someone arrived in the venue.

They went wild when she came in, yes it's Joyce Ching! I think they still look good together and Kristofer almost burst into tears when she surprised him. Joyce actually came from shooting and she didn't have sleep yet but she wanted to be here on Kristofer's special day. I don't know their relationship status but from the looks of it, they are as good as "in love". Kristofer Martin's Mom was there though and was very protective haha!

Close friend and good looking actor Derrick Monasterio also surprised Kristofer during his birthday celebration and even sang a Josh Groban number. He's a good man, good actor and I hope he gets better at it. He deserves to have a lead role in his own soap soon. He wished Kristofer to have a break from his busy schedule and perhaps go out with the guys. His best friends were there anyway, and I think they did really go out that evening.

Now these guys were just the tip of the iceberg, because he had more surprises after these celebrities that evening.

Kristofer's fans went up on stage and put him in the center. They began singing a song for him which he really appreciated. He liked it so much he began balling, he was really touched by the gesture and the love these guys and gals gave him.

Then after that, Kristofer's Mom and Dad gave their message. Kristofer started balling and cried as his Mom and Dad thanked him. Dad also said that even if he's not around, he should always follow Mom's advice and I think he took it to heart. His folks also reminded him that there are a lot of people who believe and love him so he better not disappoint.

Then I saw a lot of people crying. The fact is, this guy is just starting but he's felt really loved during this day. Tess Bomb told me that among the events we've been in, she says this one has got a lot of heart in it. I couldn't agree with her more because Kristofer has been working so hard and this was some sort of GMA Artist Center saying "Thank You" to him too. He was surprised they organized something this big, in some way I hope he felt special.... because he is after all a prized young talent in this station.


I heard he's going to be in a new program called Healing Hearts next year, so that's something you should watch out for. He's going to be together with Joyce Ching on that too so if you like the pair, that's even more reason to love them. Happy happy birthday Tun! Don't doubt that you are loved okay? Don't cry so I won't post photos like that next time haha! Sorry had to! :) Happy birthday man!

Thanks to GMA Artist Center for having us during this event!

http://gmanetwork.com/artistcenter
Posted by John Bueno at 1:30 AM