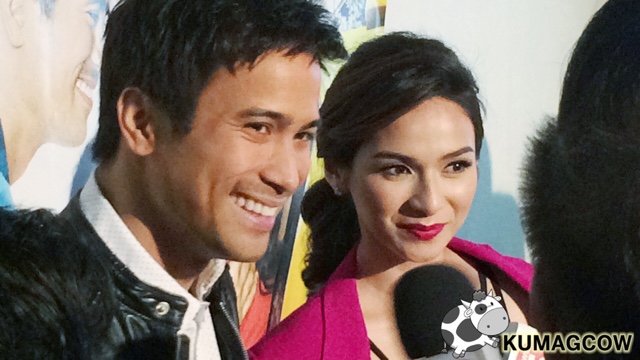 I was having a bad day but decided to go to SM Megamall for the premier night of The Prenup starring Jennylyn Mercado and Sam Milby. It's a comedy, drama, feel good film that would make you love Jennylyn and Melai Cantiveros all over again! I'm saying that because among all the characters, they had a pretty good run in cracking jokes, and funny lines. Aside from that, Sam Milby actually did good in countering Jennylyn's funny quips and romantic but near sexy dialogues so you're in for a lot of that too. Ella Cruz and Neil Coleta aren't just ordinary siblings, they're really going to give the needed spice to Jennylyn and Sam's relationship because their respective families will prove to be a little challenging, they don't get along at all from day 1. The conflicts will definitely affect their "forever" and the situation won't be conducive for a wedding. Jacklyn Jose, Freddie Webb, Gardo Verzosa, Dominic Ochoa won't be good friends, but they'll do anything to make Jennylyn and Sam happy. Will they end up together or not? Well I don't want to spoil things for you but really, it's worth the watch!

Here are some captures from last night's premier. There are also some artists, their friends and family that supported the movie. So enjoy and share this article with your friends please!


The Prenup Premier Night at SM Megamall by kumagcow

This is produced by Regal Films and if you're like me, take a break from work and watch this film! You won't be disappointed! I'd give this 8/10 because it's funny and made me change my mood so easily.