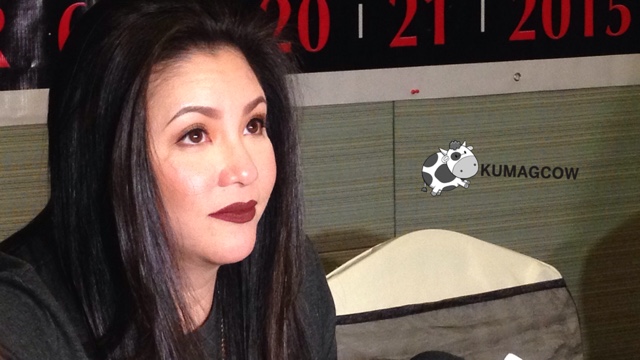 I was with a few entertainment press and bloggers earlier for the press conference of Ms. Regine Velasquez Alcasid as she continues to promote "Regine... at the Theater" which will happen in Solaire this November 6, 7, 20, 21 at 8PM. Her special guests include Aicelle Santos, Jonalyn Viray and Audie Gemora. Although when we asked, she said that Aicelle and Jonalyn will perform in separate dates whilst Audie will be singing on all of them and will constitute different songs in this concert not entirely concentrating with Theater songs. Although there will be songs paying homage to local and international theater acts, she'll still be singing a few expected songs that her fans will surely enjoy.


Regine Velasquez at the Theater by kumagcow

Part of the questions thrown at her by the press was about her Mom's fascination about Aldub and how she's totally okay with Paolo Ballesteros impersonating her.She says what Paolo is doing isn't something new as there have been several acts and people who have done it before, and she takes what he's doing very flattering and not something to frown about.

Aside from that, she's very thankful about what Aldub has done for her Mother because the phenomenon has really kept her Mom happy. As you know it's not difficult to lose Mang Gerry (Regine's Dad) and Regine's mom gets very entertained by the pair whenever she sees them on TV or when Regine and her siblings got their Mom tickets to the Aldub Tamang Panahon event in Philippine Arena last weekend. Pay close attention to her statements on the video (almost last part) and see how thankful she also is to Ms. Malou who got her tickets to the show in spite of a sold out crowd.

By the way, for those who are also excited about Regine... at the Theater concert this November, they won't be selling tickets on the venue and will exclusively be doing it through www.smtickets.com and its outlets inside SM. It won't be available anywhere else so if you haven't bought tickets yet, now is the time to panic! LOL! Ms. Regine Velasquez Alcasid promises a couple of surprises that you'll love once you watch the show. Now that's super great!