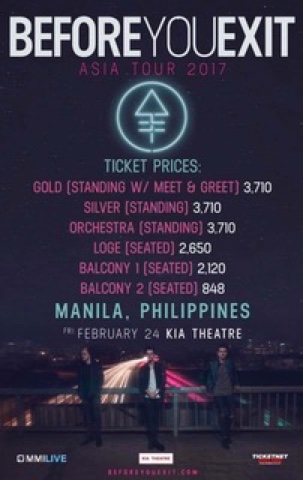 I've seen this group back in July last year as part of #SmartMusic's lineup of performers. They were pretty great and you could feel the crowd loves them the moment they set foot on stage and play favorites such as "Model" and new tracks from the "All the Lights" EP like "Clouds" and "When I'm Gone". Before You Exit will grace the KIA Theater this February 24, 2017 and band members Connor McDonough, (Vocals/Guitar), Riley McDonough, (Vocals) younger brother Toby (vocals) promises fans they'll give back the favor for making them one of the most successful bands in the world.

These guys have worked with the Vamps, Taylor Swift, Ed Sheeran, Nicki Minaj, One Direction and have done several tours and promised the last time they were here that they will come back (Oh I was there so I remember!). Isn't that sweet?

Labels: Before You Exit, concert, MANILA