Are You Ready for Kinky Boots?! 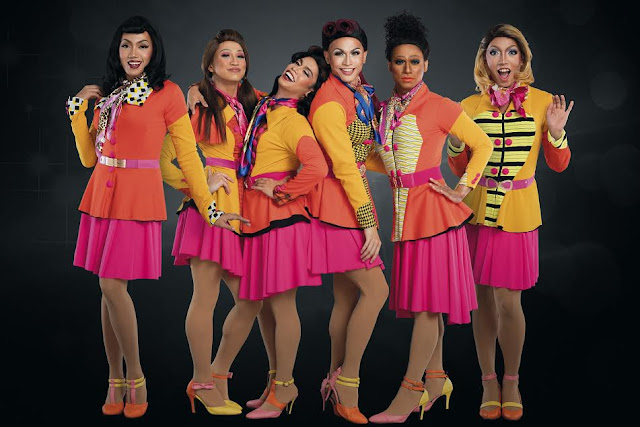 I haven't had the opportunity to see this yet but I'm raring to go in their Manila staging. Kinky Boots has been praised and received quite well in Broadway on this remarkable creation made with music and lyrics by the phenomenal 80's icon Cindy Lauper based on the book by Harvey Fierstein. Performed mostly by men and women in drag, there's no other musical that would have been able to personify Charlie Price the Milan Stage Manager, Lauren, Nicola and the other cast than by doing it with people with THE ball$ to do so. It already had won a Tony, and Grammy awards so if you think this would be something that you should brush off, you better think again.

In the story, Charlie Price inherited a struggling shoe factory from his Dad and eventually met drag queen Lola and her crew called "Angels" making a new line and later on successfully reviving his business because of the fabulous things they created for them.

These angels exuded the glitz, the glamour and did out of this world performances and needed some people who could do as well in Manila. This is part of the reason why they got professional dancers in the cast, and they sought the greatest ones like AddLib Dancer Mark Pineda, Singer and Actor Gerhard Krysstopher and G Force's Ritz Beltran, Jazztin Cacayan, Michael Jahnke and Jorge Jahnke. This has been very challenging for them as the standards have been automatically raised because of this being a Broadway piece. Not to mention the style of dancing is quite different of what they're generally been used to in shows that they do here in the Philippines. Kinky Boots also needed them to dance in heels, which isn't the norm in most numbers that they do in variety shows or plays they've done in the past. Doing that the whole run is also hard, but it didn't stop them to learn and love this staging... and they'll show you why at the Carlos P. Romulo Auditorium at the RCBC Tower in Makati.

Tickets are still available for the show through https://www.ticketworld.com.ph and priced Php 4180, Php 3135 and Php 2090 on reserved seating. You should never miss this as this will only run from June 30 to July 23. I would have to free my own schedules to actually have a glimpse of this show, which I'm sure I would absolutely love!

Are you ready to wear those kinky boots too? LOL!