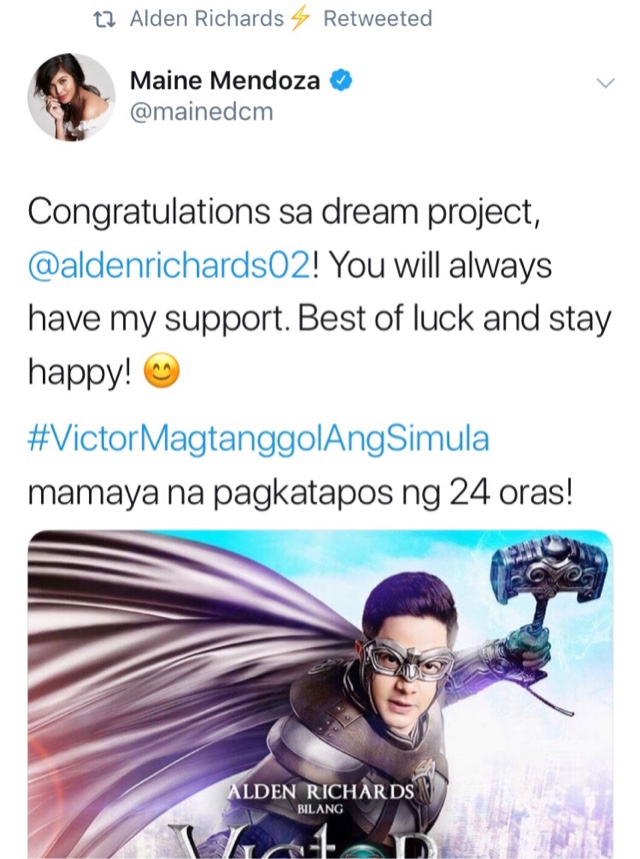 Today we will all see the premiere episode of Alden Richards starrer Victor Magtanggol, on GMA Primetime.

Fans are abuzz about the show and it’s stars especially the supporters of AlDub. On Twitter, it seems that there are factions who didn’t want to support this project because the other half of AlDub/MaiChard tandem Maine Mendoza isn’t included in the cast.

Just this evening before the premiere episode of the show however, Maine Mendoza (the gorgeous and beautiful lady) sent a public tweet showing her full support to her husband (I kid) Alden Richards saying “You will always have my support, best of luck and stay happy!” to the delight of AlDub fans around the world who commented, retweeted and liked the Tweet.

Alden Richards upon seeing the Tweet suddenly replied to his wife (I kid again! :) ) and said “Maine Thank You ng Sobra” (which means “Maine super thanks!”) which prompted the fans to go ballistic again on the Micro blogging platform. Not surprised.

If I could just say, this is just a super touching gesture from Maine. She’s definitely a different kind of woman, very special. I really love them both! I hope fans of the two continue to support their shows as Maine is doing a lot of projects (recently her own MAC Cosmetics Lip Line) , and Alden does his too including Victor Magtanggol.