Meeting MEGA for "SHARON My 40 Years"


This is my first time seeing Ms. Sharon Gamboa Cuneta-Pangilinan in the flesh.

Just like you, I have been a fan as far as I can remember. Her iconic movies, her variety shows, her hit songs and shows all made us feel just be so thankful for her existence. Rightfully so, she's been in the industry for 40 years.

Honestly, I was a little afraid of seeing her because - I'm just an ordinary person - and she - is an icon. I felt a little unworthy to talk or interview her because of her stature, her place in society, not to mention being a Senator's wife and Megastar. It's a title bestowed only to her, by the public for being a remarkable artist. I was invited to this event  through our friends from Philippine Airlines, and I wasn't that crazy to pass on the opportunity to see her. I sat at the back of the room keeping a low profile, almost incognito in between entertainment bloggers that I often am with in events. During this thanksgiving dinner, I planned to only ask a few questions if we had a chance to talk to her towards the end of the program they planned to do. That didn't happen quite as planned.

When it was announced that she was at the venue already, I thought most of the people in my table would've fainted by now. Ms. Sharon was ushered in and you know what she was doing? She was holding her phone up on her face and she was gamely taking Instagram videos live, glowing, smiling, sincerely happy seeing her most loyal Sharonians who evidently have been with her through the years. I was thinking of a stiff royal celebrity but was seeing an endearing, very spontaneous and charming woman. The way she talks, you could sense how much she's full of wisdom, learned and experienced over the years. She's someone that even if you know you had flaws, but she speaks in a manner that you would be convinced that she would still accept you wholeheartedly. I had this in my mind. 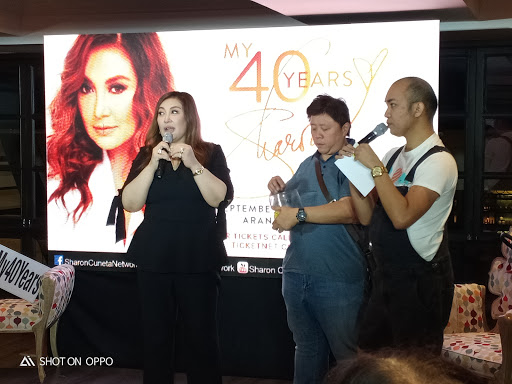 She stood in front of the stage and exchanged pleasantries with her fans, print, broadcast and online media. The funny host (her beloved standup comic) put everybody at ease and told us why we were there.

Ms. Sharon is on her 40th year in showbusiness, and what better way to celebrate this achievement but by staging a concert called SHARON My 40 Years. For starters, she wants to give back to an industry that has been so good to her.

The SHARON My 40 Years Concert will happen on September 28 at the Smart Araneta Coliseum. Tickets are available now on Ticketnet.com.ph or you can call 911 55 55. She dubs this her BIGGEST and HARDEST concert to date because you can expect a lot of production numbers to pay homage to her career. She tells us that things were not always good but in all those downfalls, she has learned a lot and would never regret any of it. Aside from that, she told us how proud she was for her daughter KC. She's armed her with all the things she can, she's out on her own in the battle called life.


Here's our interview with the Megastar after the event.

About KC Concepcion and her wish for the people who love her:


She is in her prime, but Frankie (her daughter) gets mad when she gets conscious about her weight. She tells us how she eats, and perhaps including some of it on the websiodes she's planning for her Youtube channel.


I personally asked her about why she put up The Sharon Cuneta Network and she said it was one way to get to connect with her fans in a direct way. She also shares what she thinks about her millennial fans, and her privacy. Check out our interview.

Her advise on how to handle money, and how to be happy? Simple, TRAVEL! She also shares her dream countries  and bucketlist!

Do you know why she loves bags? Here's why!

Here is Ms. Sharon Cuneta inviting you to watch the concert on September 28th at the Araneta Coliseum! 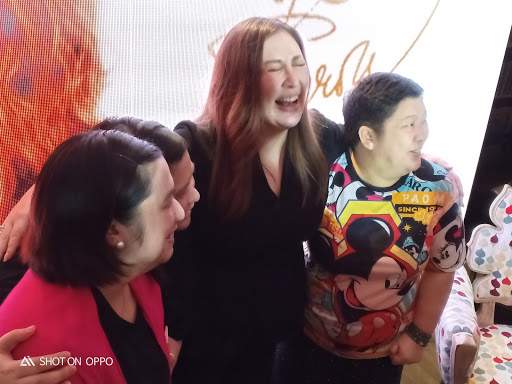 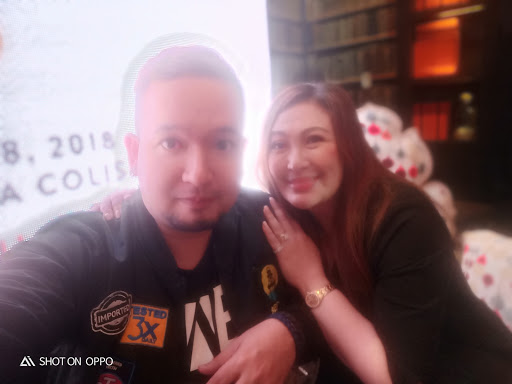 I was too shy to do this but it happened. Thank you for the opportunity to get to know you even for a few hours Ms. Sharon Cuneta. You are loved by the people because you genuinely care for them, you check on their welfare and the sincerity encompasses everything. Rich, poor, LGBTQ or just about any joe, you have them at your back because you're just YOU, and we thank you for that.

I'd like to end this bit with that saying that was shared by Ms. Sharon Cuneta. I researched and it came from Lt. General Sir Lord Stevenson Smith Baden Powell (the founder of scouting) who says "Try and leave this world a little better than when you found it, and when your turn comes to die, you can die happy in feeling that at any rate, you have not wasted your time, but have done your best."

PS
Thank you for the prize, I promise to make people in my life happy with it. (check future webisodes or showbiz news to know what this means)

Please make sure you don't miss Ms. Sharon Cuneta's show on September 28 at the Araneta Coliseum and on August 3 8PM at the SMX Convention Center in Davao City's SM Lanang Premier.