Denise, Shaina and Jake for The Haunted 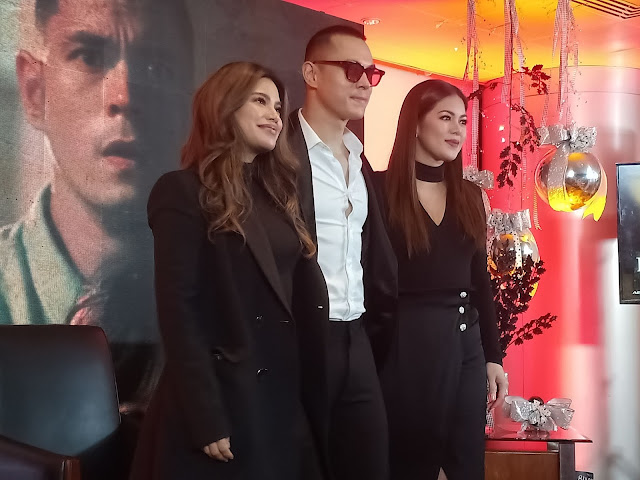 Another project from Dreamscape is about to happen as "The Haunted" will premiere this December 8 at 8pm. It stars Jake Cuenca, Shaina Magdayao and Denise Laurel. This is also directed by Emmanuel Quindo Palo who also did The Generals Daughter from the same production.

Denise says "This is about family, life, for love and second chances. I will have a twist, but all of the characters will have that. It's going to be given to the audience to connect things and the haunted part is going to be caused by what they did in the past. There are a lot of things I could have done better, the burger last night was a regret."

Shaina says "I'm very excited because I'm back with Dreamscape. Our lives here will be full of tragedies, Ate Rita will be playing a person who needs to be pleased because I caused her heart attack/stroke. Jordan isn't a goody two shoes, so he has something to do with the ailment. We have all worked in the past but since we are in the same circle it was easy to work with the cast. When I was younger I did a lot of things I regret, but then I learned to live without it. I can sleep well at night. It's never too late to find peace when you go through a lot."

Jake adds "Thank you for the opportunity Dreamscape. It's called The Haunted because of the supernatural, the house, the character who you would need to investigate who plays who. I try to live a life with no regrets, but I did regret a fashion show when I was a little fat. I hope I have had the time to worked out a lot before that."

Every Christmas it's a time to bond, this would be something that would be a good time to be with your family. Make sure you watch the first episode on December 8, 2019 at 8pm because they're raring to give you a fright on this date.