I'm starting to think that I've become a PPOP fan boy as the Philippines continue to showcase some of the most talented groups in the country. Recently, I was invited to a KUMU event as they got my personal favorite girls Calista, and groups G22, Dione, Press Hit Play, VXON, 1ST.ONE and KAIA. 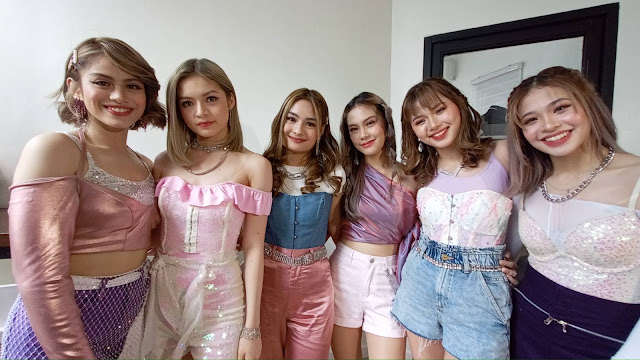 Calista's Anne, Olive, Dain, Denise, Elle and Laiza were all smiles meeting the press and fans, they prepared mighty good for the short performance they were gonna do during the event. Clad in femme fatale pop outfits, they were like special candies, sweet and lovely! After their very successful VAX TO NORMAL concert last April, they still managed to do rehearsals together. Honestly, I was impressed with what they showcased in Araneta Coliseum last April and hope that they'd bring the concert in other countries after that. It was world class, best of all, it's dedicated to frontliners which have been boldly doing their job during the pandemic. Artists like the talented Yeng Constantino, dance princess AC Bonifacio, hearthrob Elmo Magalona, popular actress Andrea Brillantes, the incomparable Darren, and good looking dance phenom Ken San Jose performed there as well. Here's a short interview with Calista during the KUMU signing:

Partnering with KUMU will not just give Calista the ability to entertain with games, songs, dance and performances, but real time talk with fans who would want to connect with them on a personal level. I imagine them getting to know the girls and their personalities, all the more reasons to stan them especially when these ladies want to inspire people. The girls also surprised me when they answered that they're not in the PPOP industry to compete with other groups, but to become a force that brings people together so they could both bring honor to the country. And as I mentioned earlier, they were really eager to do that by planning collaborations in the coming months, they also have several events lined up where they will be performing with the other groups which makes this even more exciting!

Aside from these ladies from Calista, we also got to talk with G22, a pop group under Cornerstone Entertainment Inc. They were a charming bunch of ladies, very eloquent and I love how they've got serious pipes when they performed during the event. They present a different flavor, and had a sultry kind of vibe.

Sorry for the background noise as we were in a real coffee shop when this interview happened, but this is the first time I've gotten to talk to them, they could pass beauty queens bar none.

DIONE on the other hand got me cackling a bit, like their outfits, their personality was actually very colorful. I love how playful and game they were answering questions from the press. Joyden, DK, Clara and Ella were just so nice, they'll surely go places. They're also excited about what will happen on the KUMU app because they've only had a couple of events where they get to talk to their fandom called TALI/ES, and this just gives them an avenue to interact with them more because there will be instances of chatting with them personally on the app. 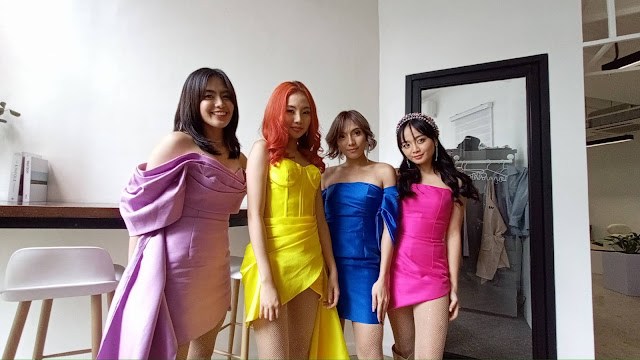 Here's a short interview with them that afternoon:

PPOP Girl Group KAIA on the other hand banked on really good rap lines. The vocals are all impressive, which goes to prove that Filipinos are a force to be reckoned with in singing. Their style is swag, and I like how varied things are in the PPOP girl groups, each has a different thing to present even if they are in one venue. This is a win for fans as they've got a lot of groups to enjoy in the platform.

Angela, Charice, Alexa, Sophia and Charlotte also has a single called BLAH BLAH which I had so much fun hearing during the event. They sang live and judging from their previous videos, they've improved so much by leaps and bounds. I'm glad there's more talented artists like them in the country, we're not being shortchanged by KAIA. Their music is so much fun and danceable!

If good looks were a crime, these boys from VXON would be in jail for a long time. I think some of them are actors too, so basically they're all triple threats. They also write their own songs which is a plus in the artistry department. They have sacrificed a lot and looking at their performances, they're doing so good. I wouldn't be surprised if Vixies would be screaming their lungs out when they perform on stage, these are golden boys. C13, Sam, , Patrick, Vince, Franz would gladly do that for you.

Style wise, I could liken them to JPOP groups, but they're definitely Filipino. Some of them rap, sing, and boy, can they perform. Ace, Max, Alpha, Joker, J, Jayson, Gift also have different personalities, but they gel as a group. The pandemic was quite tough for them just like with the other groups but they knew they had to stick together in order to succeed. They're continuing to learn the ropes and happy that they now got to perform with other groups, I think their strong suit is vocals. Joining KUMU made them grateful for all the opportunities that are given them especially now that restrictions are easing and performances on stage are coming back. They're raring to get to the top, hungry for it and if talent would be the measure of that, these boys would be up there!

Very nice and humble guys, they thanked KUMU for giving them and the rest of the groups the platform to showcase their talent and provide entertainment for Filipinos here, and the rest of the world. I'd mistake them for crooners because their singing voice would be the type that would make ladies legs become jelly, but their dance routines are equally good. They're very excited to interact with fans as they couldn't do that for several years because of COVID restrictions. They write their own songs, so it's very personal. Tell Me is out on streaming platforms so if you love them, might as well stream it today!

I love where this is going, we've got talented artists showcasing their talents to be seen in the world stage. The difference I guess PPOP is giving now through this is the "connection" as we're mostly known to be emotional people. That really sets us apart, and I'm glad these ladies and gents are thankful for the opportunity thrown to them.

You may download the KUMU app on the App Store or Google Play Store today. It's free!