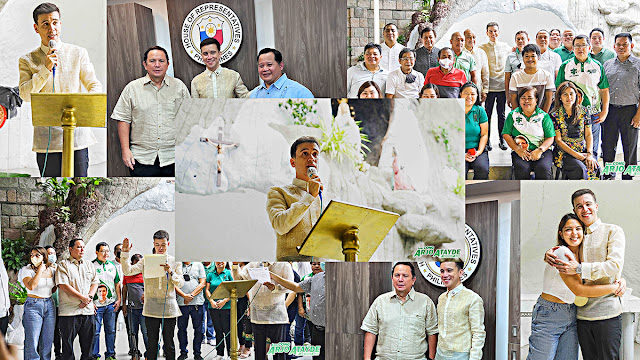 After the dust settled, our main man ARJO ATAYDE was declared as Congressman of the 1st District of Quezon City. I couldn't be more happy for my friends and family in that location as I'm assured he's going to give his constituents the service they deserve.

Arjo has already taken his oath in Barangay PhilAm Homes which was officiated by Barangay Captain Simplicio "EJ" Hermogenes. It was witnessed by his family, his friends, Barangay Captains from his district, his constituents and Team Aksyon Agad. He has also received his Congressional pin from Secretary General Mark Llandro Mendoza and wishes to work on July where his term starts at the lower house.


Arjo will prioritize laws to be passed concerning the rights of the LGBTQIA+, Women’s Rights, jobs generation, education, to help also the senior citizens, have proper policies for disaster response and healthcare for everyone. This will be something he's planning to pursue in the first few months of his term, to hopefully make sure that enactment of laws be done as he promised during the campaign trail.

Congratulations Arjo and to the whole Atayde fam! I'm so happy for you and your whole district, you're getting a person who genuinely cares for the community.