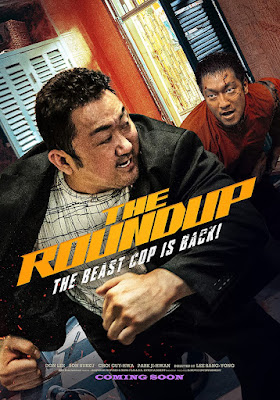 Looks like we're in for a treat this month as the most popular movie in Korea is now showing in SM Cinemas, it's an action flick called THE ROUNDUP starring Ma Dong-seok aka Don Lee who also starred in Train to Busan which was a hit worldwide.

Ms. Grace Lee says "We have been really eager to do this years ago, where we are able to showcase Korean movies while it's being shown in Korea. I've been convincing them since 2020 and got delayed because of the pandemic. In 2021, we were asked about the conditions here and they were more eager to pursue it from happening. I was fortunate to bring the number 1 movie in 2022, this is the biggest movie hit in Korea. I hope Philippine viewers to be able to watch it in cinemas now that it's available. Our partners in Korea produce and distribute, they give us a synopsis and the final edit of the movie. I've known how Filipinos love the stars, THE ROUNDUP is an action film and perhaps it'll be bigger and better (as it is a sequel), and possibly in the next projects it'll be the stars promoting the movie here. Glimmer is also in drama production, we have to sign an NDA until it comes out and we're not allowed to give details especially when half of the scenes are shot in the Philippines. THE ROUNDUP is actually a sequel of a drama, Dong Lee is also a big star since he's in Train to Busan and different series. He's very versatile, you'll see layers of him in the movie."

She adds "Filipinos and Koreans have similar values. Korean movies have high production value, and distributing this at this time might have challenges, but all good and Glimmer (our partner) has been very supportive. Recently, international movies have been doing quite nice in the box office and opening up with TOP GUN for people who are slowly coming back to watch was a pretty good move for us. We do even have next ones in the pipeline but we have to wait til they give their go signal. It's risky to produce movies in Korea as the value is pretty high. We shot here for 3 months, with Filipino actors doing very big supporting roles and it will come out in November. We've already crossed that bridge and have Filipino talent is pursued. We are doing this as a start for the Korean movie wave, it's a hit in Korea and Southeast Asian countries. The market is ready, I don't see why not the Philippines and acknowledge we are ready for consumption. We are talking to Korean partners about bringing Philippine content to Korea. We're in the talks and we're taking the next steps. It'll be an exciting year for all of us!"

Go watch the movie today as it'll be something worth your time. It won't be guns blazing though because it's barred to have them in Korea. It's more of closeup hand to hand combat with sharp or blunt things so it's different from western movies.

Can't wait to watch it tomorrow!