SPARKLE Signed These Artists for Stardom! 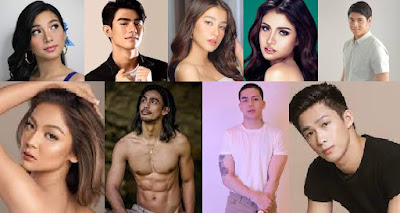 This was sucha  feel good blog conference as we got to talk to Zonia Mejia, Radson Flores, Lexi Gonzales, Rabiya Mateo, Katrina Chavez, Kirst Viray, Anthony Rosaldo, Nikki Co and Jeric Gonzales a few days ago. This was after they signed up with SPARKLE on a ceremony they called Signed for Stardom, a fitting title for people who are planning to do even more this year.

Anthony Rosaldo expressed how happy he was that he got renewed for a few more years with the network. It's his dream to always be in front of the stage, to act, as it has been his passion even at an early age. Aside from his Weekend All Out Sundays show, he's doing several TV shows, singing engagements and a coffee business he's very proud of. We're excited to what he's planning to do in the next few months with Sparkle management.

Rabiya Mateo is wishing for a project together with Jeric Gonzales. She is now going to be doing hosting stints in new shows on the network that people should watch out for. She will still be doing acting jobs but may have to concentrate more on hosting since she wanted to do that since she got in Sparkle.

Jeric Gonzales felt the same, he wants to work with Rabiya and he's happy that he got to sign contracts with her, to perhaps grow together career wise. He felt blessed he got international awards for the films he did recently, excited to share a Philippine adaptation of a Korean drama which he will be doing next.

Zonia is doing workshops in between projects so she can hone her skills even more. She's thankful that Sparkle is guiding her of what she needs to better do her work in the network.

Lexi Gonzales praises the GMA bosses and the Starstruck management for training them, to eventually land these opportunities given to them via Sparkle.

Radson Flores is overwhelmed about the projects he landed, even if he was sort of an accidental actor. He was just approached by a talent scout in a mall. He's also included in the big Voltes V project which will be out soon. In two years, he feels he still has a lot to learn and he knows whatevery Sparkle has in plan for him, he's going to do his best in every project.
Nikki Co is no ordinary guy, He graduated Business and Finance, also invested in real estate while he was working in GMA. He is ready to take on bigger roles, hopefully land a lead role soon as he is being groomed as one. He's got the body and face for it, and he's ready!

Katrina Chavez feels this management deal with Sparkle is such a blessing. She's currently working in the IT industry but when projects arrive, she's planning to do them head on as one of the prettiest faces in the network today. She already has pageant experience and now wants to concentrate in her acting career. Although if the opportunity arise, she can go back to pageants because she enjoyed doing that the last time.

Kirst Viray is now a restaurateur but is also appearing in severa TV projects and doing guestings. He's a model, so whatever opportunities that GMA and Sparkle give him, he's always game for it. As for his hair, GMA prefers it to be long but if the role fits, he's okay to lose it. He's single now, and plans to use that time to work seriously.

Here's our interview with them a few days ago, enjoy!