OC Records on their 4th Anniversary: Shows Why Different Is Good 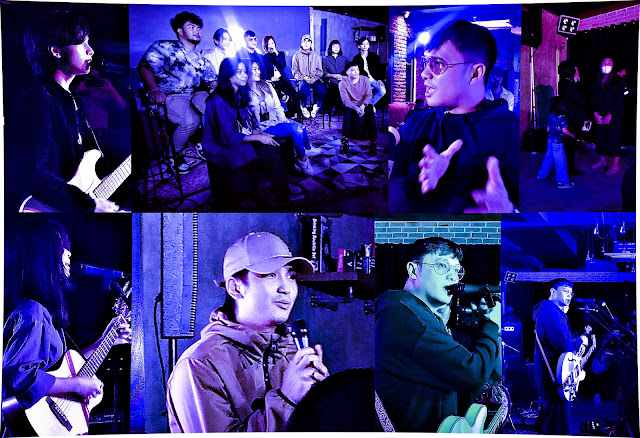 Got myself in the midst of artists a few nights ago as OC Records celebrated their 4th Anniversary in Quezon City. I've seen them grow quite fast in the last few years, but knew they had struggles much like anyone in the entertainment industry as it got crippled with the COVID-19 situation and various protocols that prevent live events from happening.

Times were hard, and for a label who's just starting to get a groove on the business it really wasn't a good time to just stay at home and watch as they've got talented men and women in their roster grow. During the small chat we had with them after the show, I got a sense of how they (the artists) all had full trust and confidence with OC Records (now a subsidiary of Viva Records) and founders Kean Cipriano and Chyns Ortaleza on what they could do. Then, their artistry reached the intended audience... got appreciated and hit after hit, broke barriers in their respective genres - and made them who they are now.

During the performances, it felt a lot like I was being schooled on how each artist carried themselves on their differences. I remember Kean mentioning he was just lucky how he had an eye to spot talent and admit they're weird bunch on stage. It's that "weird" factor that makes them special,  and as a fellow weirdo, I give credence to that statement wholeheartedly.

Adie's "Paraluman", "Tahanan", and collaboration piece "Mahika" has been doing well on radio and streaming platforms. Yes, he's even more good looking in person but you can sense why people adore his songs. It becomes something that they get to connect, how in one way or another becomes a bridge on how the artist would want to make you feel when you listen to it. The good thing is, it's not based on Adie's relationships, and I've got the impression he'll do good in that department. You'll be impressed when you see him perform live, he's very charming, and won't be surprised if women get taken hostage with his eyes. He's going to a lot of events these coming months, you better snatch that chance to see him in person as he's really an awesome musician, artist and performer.

If you're a bit of a mess, listening to artist Unique would make you welcome love and painful memories even more. He attacks vocals differently, like a wolf howling under the moon, when he's merely just introducing himself. I'd figure he's the silent introvert type, who once starts expressing himself in songs becomes a monster filled with emotions. That's his gift, and a lot of people who listened to his songs, see it.

Another discovery was a young guy named Kenaniah. He's Kean's latest discovery and I now know why. He's a bit of a mix of a very young Brandon Boyd and Bieber, that's if they had a child. He carries that star factor but once he sings, you won't be disappointed with what you'll hear. He's even blessed in the looks department, and I'm sure in a short time, he'll be hounded by girls, boys, all, for both reasons.

Eugene Layug on the other hand had me at engaged just by the title of his songs. He's a busker, a very funny one at that... but I bet he's swooning the ladies with his humor. From songs he's made like "Maghihiwalay Din Kayo", "Landiin Niyo Na Ako", albeit severely underrated right now, he's bound to take the spotlight soon. Kean likened him to that guy who always figured out songs in a drinking session, and it's time to make his brand of music normal so even more people could enjoy it. He was a ball of energy, dropping jokes at every occasion while most of us were in a serious fit. It's his identity, whilst it was literally the first time I've seen him, I already like the guy. The most daunting part of listening to him is trying not to poke fun at the stories he's telling.. because as funny as it might sound, it might be him LOL. If you want an entertaining evening, he's the man for that. He provides that humor people don't put in music, and people will surely love him for that.

Chelsea Ronquillo can sing. She's looks like a princess... one that's behind a guitar, singing pop songs of her liking and killing it. I've listened to a couple covers she's made on YouTube but again. it's quite different if you see and hear it live. Though sorry boys, I think she's with someone already :) ha!

Artist Pappel had me think of Sugar Hiccup and Bayang Barrios when she did her number. A little eerie yes, but I like how it's different from the rest of the talented individuals in OC Records roster. It felt like a scene off Phantom of the Opera, theatrical at most. In a generation where it's mostly commercialized songs, I feel she's a breather.... the dark kind and I love how that sounds weird.

I've had the pleasure of interviewing actor Gold Aceron in the past since he's made a lot of movies. OC Records is expanding and not just concentrating on music. They plan to have more actors, actresses, artists under their wing so they would be able to manage and represent them. Gold has several awards under his belt including Best Actor in Cinema One Originals last 2019. He has also announced a few movies he's going to star in the coming months, pretty big ones at that. There are more things in the pipeline and it'll be showcasing his versatility. Chyns and Kean noticed him in a recent show and took a chance if he'd join OC, and now they're raring to make his dreams come true. Perhaps in a few months, several actors would be part of their crew and it'll be nice to see how this plays in TV shows, movies and digital streaming platforms if they get sourced through them.

In a nutshell, I'm quite excited about what OC Records have planned for their artists. They know from experience how it's done and with these talented artists at their helm, I wouldn't be surprised if one if not all would become superstars of the next generation. They're already showing why being different is good. Stay odd guys!

/*Note: If you want to watch their performances, I have several videos on my TikTok account just search @kumagcow and it's there!