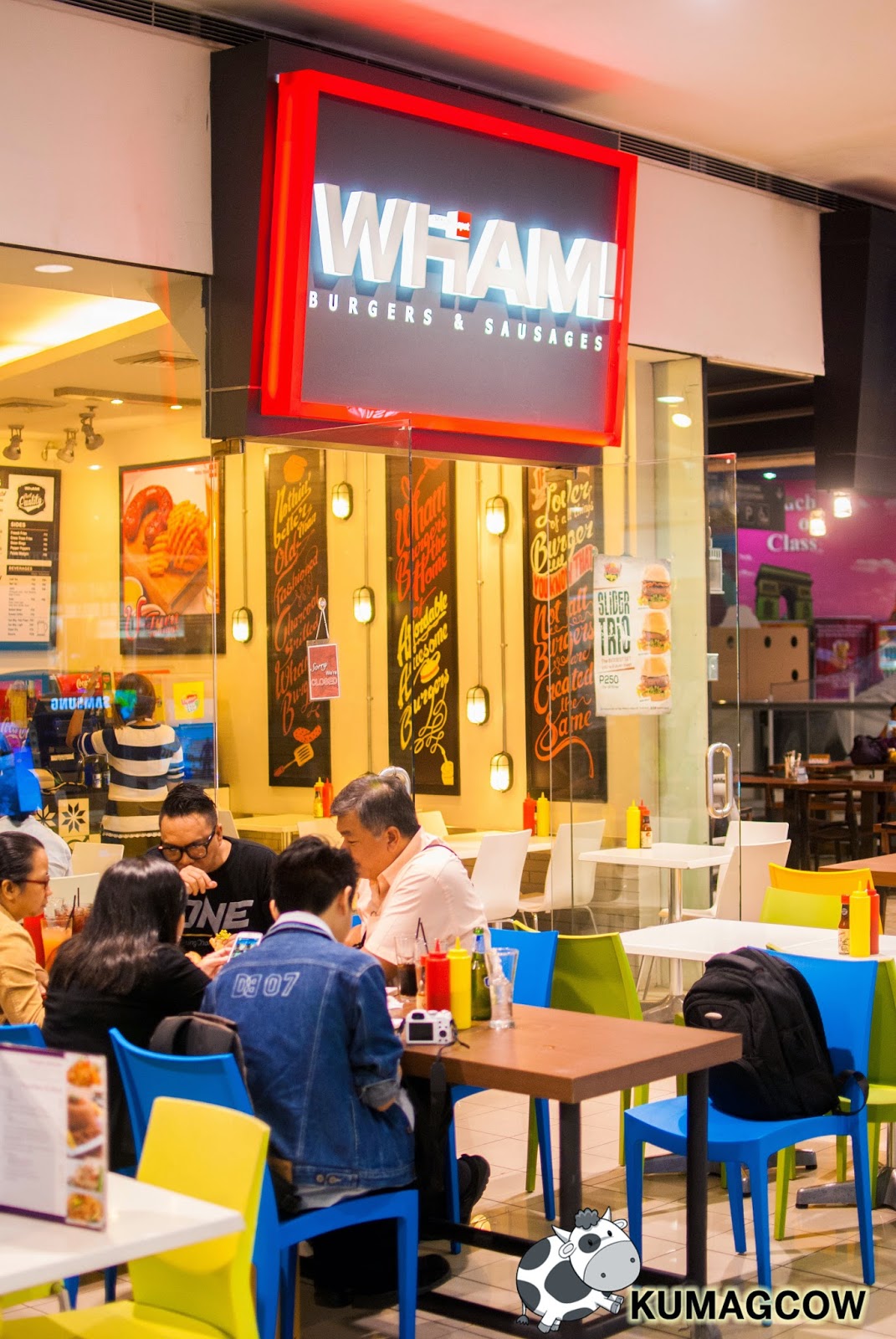 Looks like someone's got a new look at the WHAM! Burgers and Sausages store in SM North Edsa's The Block which we visited a few days ago. Yes, they went head way to look a bit more modern, mid scale and a bit rustic. They went away and lost the old comic book theme they carried throughout the years and went with a more matured looking store.

The interior was a mix of black and white, a little shabby chic without the white ceramic homey elements. For me, it was a fresher look and a bit colder since there were metal counters too.

Mr. Tony Yap owner of Wham! says "We've been in the industry for almost a decade and our customers have always seen and associated us with comics which is a more "fastfood or kiddie" concept and we find nothing wrong with that. But now along with the trend with the new players now, we are targeting more mature audience because the fans of our joint are already grown up. Now, we have included imported and local brands of beer to our menu and revamped the menu and presentation of our dishes for the different market segment we're trying to target. As you can see, we only used earth tones and neutral colors in our store to go with the new theme. But still we will cater to every single one in the family because as we know Filipino's go out in groups especially in the malls.

Aside from the taste, we also went ahead and updated the bread. Through careful study we decided to introduce the brioche bread. This one is a little special though because we have used multigrain brioche bread which makes the bun a little sweeter nuttier and way better than the Kaiser bun that we used to serve on our burgers. The Filipinos now are more discerning and more demanding, our taste has improved a lot over the years that's why we're making our burgers better. The brioche has a little more following and it looks appealing too according to our customers. I believe that we have offered a great improvement on our products."

I initially thought I was actually getting a smaller burger but they said that it's got the same kind (right amount/ratio of lean meat and fat), still 1/3 pound 100% beef patty measured one by one by hand but it's just a different kind of bread. The Kaiser buns used to be so big that it actually overlapped and made the burger looked bigger even though it's the same and now, it's just the right size. The patties will never never ever change. It's a thing that their loyal customers wanted and they listened to them. Isn't that smart?

Now people think they didn't have sausages before in their menu but they actually do. It just didn't share the spotlight of other items because they served the ordinary ones that you can get off of other restaurants too. Now, they've included specialty sausages like these ones which are imported.

Take for example this thing they call U-Turn. It's 100% Swiss and it is my favorite on their menu. Sink in to your teeth and you'll feel the juiciness ooze out of the meat and you can taste the smokiness of it as it's real deal charcoal grilled. They even showed us their grill where they cook this. Delish!

They now emphasized sausages too on their menu. It's even getting more orders now because they're giving a free hand in customizing combos that comes with it. Aside from the usual sides of onions and mayo, you can choose what other things you want to go with your sausages. The fries would make you feel full for sure and you can swap it with others. Of course everything goes well with beer!


They've sourced imported Bavaria from Holland and made it available for everybody that would love to feast in their stores so if you fancy the lovely imported sausages, you've got the best beverage that would also come with it bar none. If you are up to it, take a trip up north at SM's The Block and visit their store on the 4th floor. Don't ever forget to order the U-Turn which everyone loves because it's the good things that I want to to experience more. Get your hands on these burgers, sausages and bottles as soon as you hit the stores. Pretty soon, you'll see all the WHAM! Burgers and Sausages stores look like this one, so if you want to experience it early... you know where to catch them because IT HITS THE SPOT!

https://whamburgers.com
Posted by John Bueno at 10:00 AM