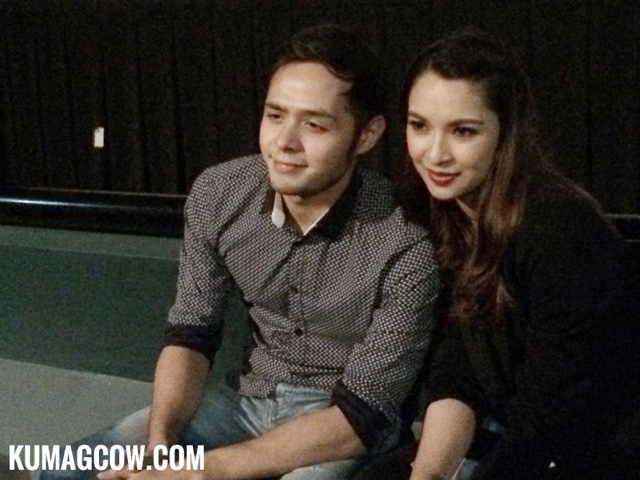 I am typing these thoughts at 3AM. I just watched the Ryza Cenon and Martin Del Rosario starrer for the QC International Film Festival entry called "Ang Mananananggal sa Unit 23B". I thought it was going to be a run of the mill horror story that we always watch during this season, but alas, that wasn't the case at all.

The supposed freak show turned into a light plotted romantic film. I was giddy seeing how the love blossomed between Nico and Jewel, and how it almost failed in the end.

Humor wise, I would really want to give props to Ms. Vangie Labalan for doing such a good work on the grandma role, she had us love her character which was so cute and endearing.

I could feel Ryza Cenon struggle really hard on that run of the mill painful transformation to a mythical monster, she did good as Jewel and if there's one thing I would want her character to do, it's a successful love making session with Nico. Not to spoil anything but I don't really find this movie scary at all, but more "cute" in a way.... plus a little bloody with the way things turned out for the lead roles. I think that was on purpose too, a little thinking wouldn't really matter much to capable audiences.

Here's our short interview before the film was shown in Robinsons Galleria.


I went home wanting to congratulate the two who saw the film with us a few rows back but they were already whisked away for work and perhaps more screenings the next day. I couldn't be prouder for Martin Del Rosario, if I would have not known these artists personally I swear there must have been something going on with them romantically judging from the film. It's very current too as it touches on Extra Judicial Killings, not on the President or any names though.

Think of horror, but see something cute, if that's making you think about seeing this film, nobody is stopping you. As for me, I find it good to watch with friends and your girlfriend. Go to Trinoma, Gateway Mall, Robinsons Galleria and UP Town Center. It's totally worth it! You'll end up smiling like I did. For the ladies, pretty soon you'll love wearing red nails. Watch the film and it'll tell you why.

http://gmanetwork.com/artistcenter
Posted by John Bueno at 1:34 AM