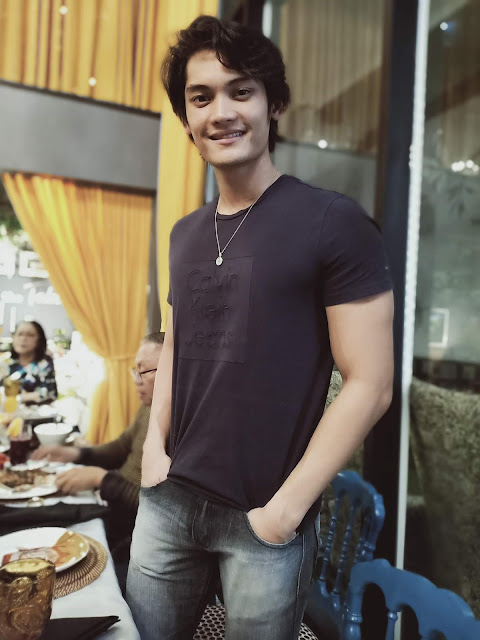 This is the second time I'm meeting Javi Benitez, the first of which he was being launched together with 15 other men and women for StarMagic's Batch 2019. He's very tall, soft spoken, approachable but you can say he's a bit shy at times, but he's a very nice chap to talk to.

Over really good lunch at Trellis Manila in front of ELJ, he had a very nice grip, a very defined jawline and a very nice physique. He's definitely worked out. He's giving showbusiness a shot and he's got good reason, I guess he's that eager beaver type of guy that when he tries something out, he's going to be passionate about it, he worked so hard in workshops, with his peers and pros on how to be a fine actor, and he's really good. He just finished playing a bit role in The General's Daughter recently and people are starting to notice, he's got a lot of promise and he's not stopping there.

Javi will be starring in his own action film called Kid Alpha One, alongside a multitude of other shows on ABSCBN. He took out his phone to show us the trailer and man, he did not disappoint on how he did the action sequences. It didn't looked forced or cheap at all!

Javi definitely looked the part, and if this thing shows on theaters very soon, you're looking at the next big action hero on Philippine cinema. No wonder he idolizes Bruce Lee and other action stars! He also mentions that there is a lot of room to grow for this genre, and with the clamour of people looking for something good action wise is rising. He wants to step up to the plate and do just that!

Here's our interview with the young lad.

He's just starting, but from the looks of it.. he's one very promising young man. You're definitely looking at the next big action star.