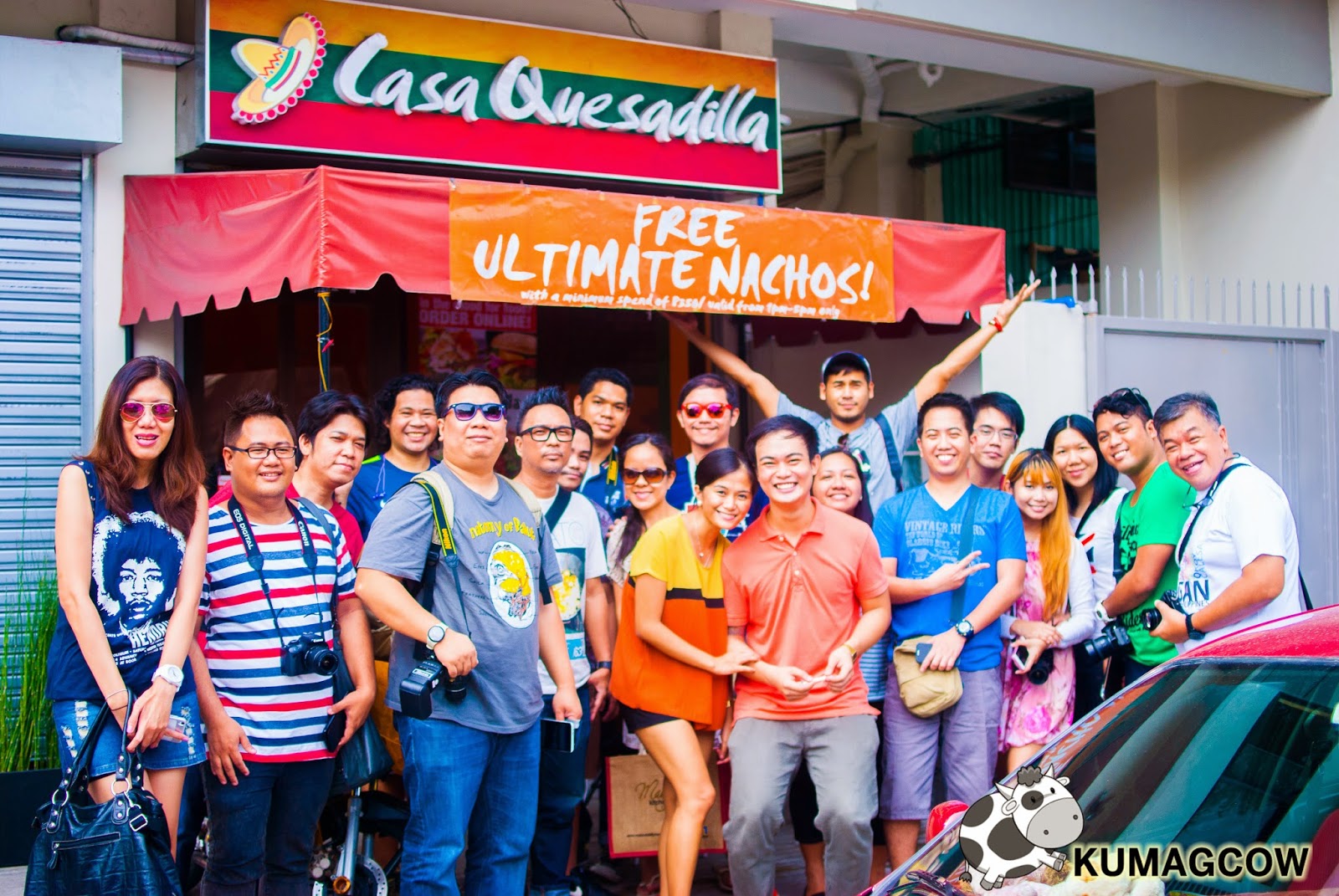 Intended as a snack place in the morning we went to Casa Quesadilla during the Food Panda Maginhawa Food Crawl in Maginhawa Street in Quezon City. This quaint little place serves Mexican Food favorites at a fraction of a cost. I haven't been in these parts so I was really curious about Casa Quesadilla and their offerings. I'm not fond of Cilantro aka flatleaf parsley and it is very present in most Mexican dishes but you know what, I gave it a go.


The restaurant can serve around 15-20 people at most but they're very fast. Their kitchen is open and preparation is made just at the back of the counter so you can see everything made. Just as I expected they do have flatleaf parsley but you can ask them to edit that out if you wish, they also have all sauces on the side to control portions. Their Dynamite Beef Rolls isn't just the same like you see in restaurants which is just filled with Cheese and a whole Finger Chili. They've added ground beef to it so it tasted more savory and appealing. It's not too spicy either which would be good for those who doesn't like extremely hot food. Mind you, I was really surprised to see most of the things in their menu to be either less than a 100 bucks or a little over that because their serving is roughly for groups of 2-3 people. I would actually be ecstatic if they also served liquor but I learned later on that the whole Maginhawa Street doesn't serve beer (but you can bring in Wine on most restaurants I think, everything else is legal). They're very near UP and the foodie community basically wanted to probably promote food more than that, or they're just all dreading drunkards to frequent the place. That's really heaven for me LOL!


Meet the Ultimate Nachos. Their version is ample, quite affordable, even free from 1-5PM with every Php 350.00 purchase. It was okay for me, just okay - but if you want your stories to run a very long time in this place you should order one because it begs to be the ice breaker, a chip every time there's dead air (more cheese please!). Although, I bet you'll be amused by the interior enough that it's not going to matter. Aside from that, Casa Quesadilla plays Mexican music, you'll be in a very festive mood in no time and enjoy my favorite activity "People Watching" when you are sitting outside the restaurant at night.

My favorite on their menu is this Spinach and Chicken Quesadilla. The simple pleasures in life personified with a spinach shards and chicken slices smothered with cheese (oh and these cheeses are imported! Monterey Jack etc.) pit together on pita bread. I love quesadillas and this version was all worth it. It's creamy, cheesy and the lovely spinach which I usually love in pastas but worked in this case.


It's East meets South America in this Beef Yakiniku Quesadilla. It works. I thought it wouldn't but you can taste the cooked Yakiniku style beef in every slice which is more on the savory side. I was imagining I could have this with beer again but it passed on all colors with a glass of Mountain Dew available at the joint. They've got Iced Tea too (unli at Php 50) for those who want something more refreshing paired with their food.


For those who would love to fill up their tummies in no time, this Mexican Beef Burrito is surely the most value for money thing that I've ever found during this trip to Maginhawa. The flavors are intense, the servings are huge and dirt cheap. I even asked them how they were able to keep the prices that low and they answered they buy things in bulk. They've also got suppliers that help SME's or startup businesses like them who serve real, honest, good food. I found it comforting munching on just half of it (as I was pacing myself) but I could probably eat three of these in one sitting (no joke!). Though the rest of the population could get full with just half (for the ladies) and whole (for the gents!) in no time. It's really good. They've also got Chicken Burrito which would be good for those watching their weight, as if the carb loading wouldn't do that haha!

This joint is owned and operated by Jimbell Caluncaguin, Ayce Frias and Nooe Frias. Say hi to these nice folks if you're visiting the place because the community thrives with making each dining experience very personal. Tell them what you want on your table and they'll make sure your day will be made, especially those lip smacking burritos! Darn I'm even salivating just thinking about it now. Please visit them at 176 Maginhawa Street, Sikatuna Village Quezon City. Their on that G&CY Manor building's commercial spaces along the road so you wouldn't miss it. Worth every penny, nickel or dime. You can also like them on Facebook at https://www.facebook.com/Casa.Quesadilla. Since they're now part of the Food Panda family, you can order online if you are within the area (Food Panda App is location based!) by downloading the app in the App Store or Google Play. You can even order through web at https://www.foodpanda.ph. I'll definitely be back here!