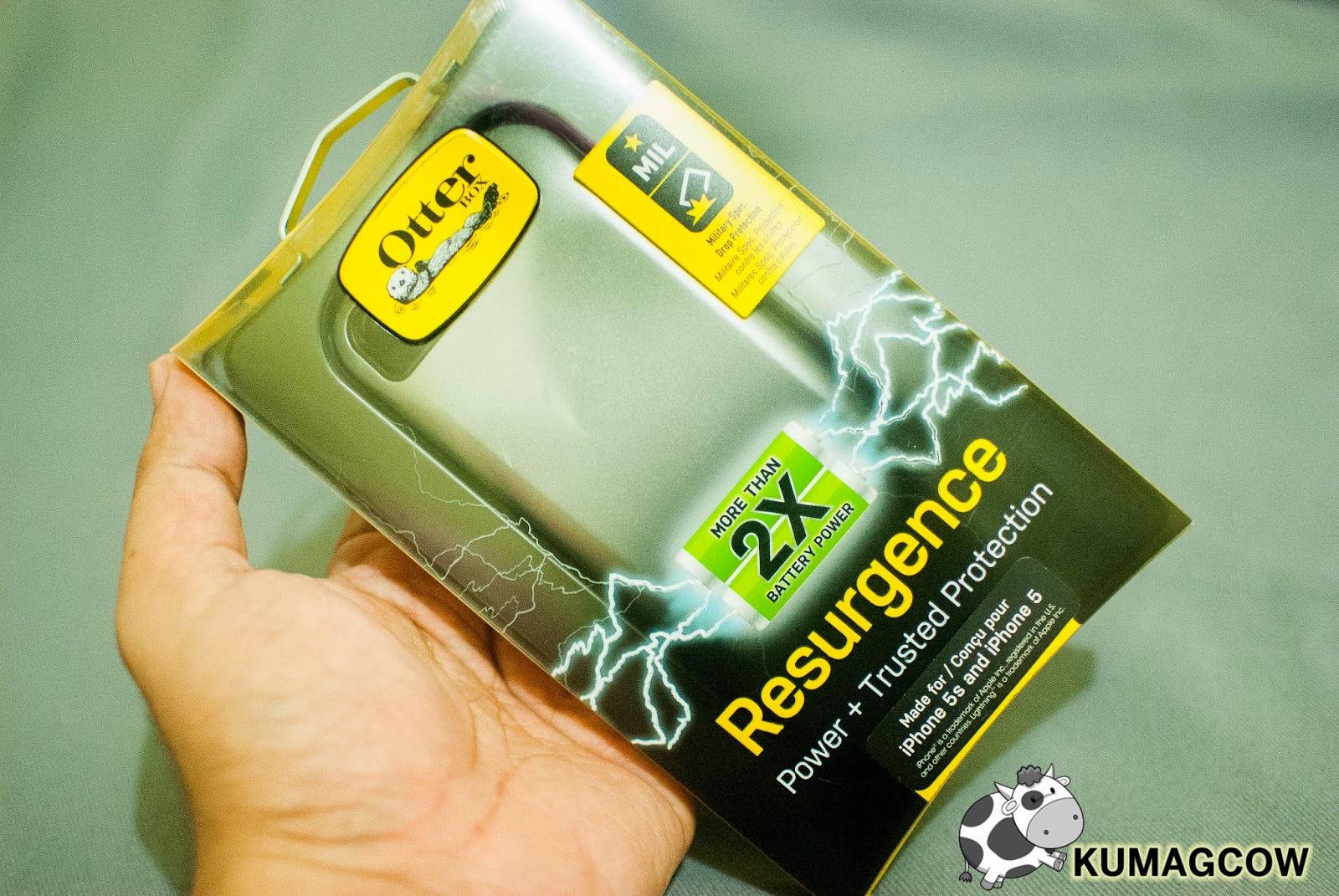 Still trying to find that perfect Christmas gift for your man? Well if he's an iPhone 5 and 5S owner like me, this might be your lucky day. This is the Otterbox Resurgence, one of the most spectacular social media life saving cases that I have ever seen. You see, if you've got an iPhone 5, the battery life problems will always haunt you, more so if you are using the LTE connection. Having an extra battery of course isn't a choice because iPhones do not have that option. I always lug around 3 power banks and it's a little heavy + bulky but I don't have a choice because my phones would only last a few hours if I don't turn off data every now and then.

Otterbox Resurgence is everything you want in a phone case. Aside from the world class full proof protection you get from each Otterbox product that you get from their stores, you'll also have more than twice the battery power you need to juice up your iPhone 5 again. So if you think you're missing those important moments because your battery drained early, this might be the best thing that ever happened to you.

As the box indicates, resurgence takes its cue from being able to revive your device when you really need it. Aside from the obvious drop protection from having an Otterbox case, this has a 2000 mAh battery inside and also has smart charging capabilities which automatically stops to save batteries for later. It doesn't also take much time to charge phones because it is high speed, a feat that I couldn't do before on third party lightning cables that I purchase in phone accessory shops every few months. Some of them get broken right after the warranty period and it's a pain to get one that costs thousands of pesos too.

Unboxing, it contains the quick start guide/manual, the almost 2 ft. micro USB cable which you can use for data or charging and the adapter for the 3.5 mm jack. Then of course there's the case itself.

One thing that I'm so amused about is the charging cable. Now you don't have to have a lightning cable in order to charge this device and can borrow your friends chargers just as long as you have USB ports on it.

The adapter for the 3.5 mm jack made sense because once that you use the case, the thing becomes longer and you won't have a convenient way of using your headphones or earplugs since it'll make your device longer.

The adapter also doubles as a cable organizer so you can keep your earphones nice and tidy without having to move around your bag and tangle with other wires you have in it.

The small button on front is pretty special. The ON and OFF function only needs a 3 second long press and the thing is specialized because it'll show you how much power it has left on the case. The LED marking has 4 levels, it'll be less lights if you've got it used up eventually.

As for aesthetics, they still kept it thin and fit in your pocket just like when your phone didn't have it. It also fits perfectly and doesn't  bother pressing on buttons because it is designed for the phones you are using. It's also available in 4 colors, black, glacier (which I'm using), satin rose and teal shimmer. Remember, this has military grade drop protection as with other Otterbox cases too.

I also love the small opening for the camera because as you can see there's nothing in the way.

Putting in my phone was also easy. Just open the lid on the top to separate the front and back portion of the case.

This is made of tough plastic material and completely protects the body of your iPhone5 or iPhone5S.

The Otterbox Resurgence works by having the small lightning cable connected to your phone as seen here.

Connect the lightning adapter on the phone and it'll snap right on with a snug fit. Snap back the front cover and it'll look like a new phone.

It doesn't add weight that much and you won't be uncomfortable carrying it around because remember, it's like having an additional power bank on the case itself without you lugging around an extra power bank any longer. Again, once that your phone reaches 100%, it automatically stops charging and saves that to future use. I haven't seen anything like this yet in the market. The ones in the side streets probably also use recycled laptop batteries from waste in China so it doesn't last as much. Otterbox is on a class of it's own and you can't deny that.

If you haven't bought anything yet for your man or woman, I highly suggest you check out Tenkiebox and their kiosks + stores nationwide. All original Otterbox products are available here and more. From Cases, iPhone and iPad accessories, they've got it all! Please check out their social media channels below for promos and other devices that might interest you and your loved ones.