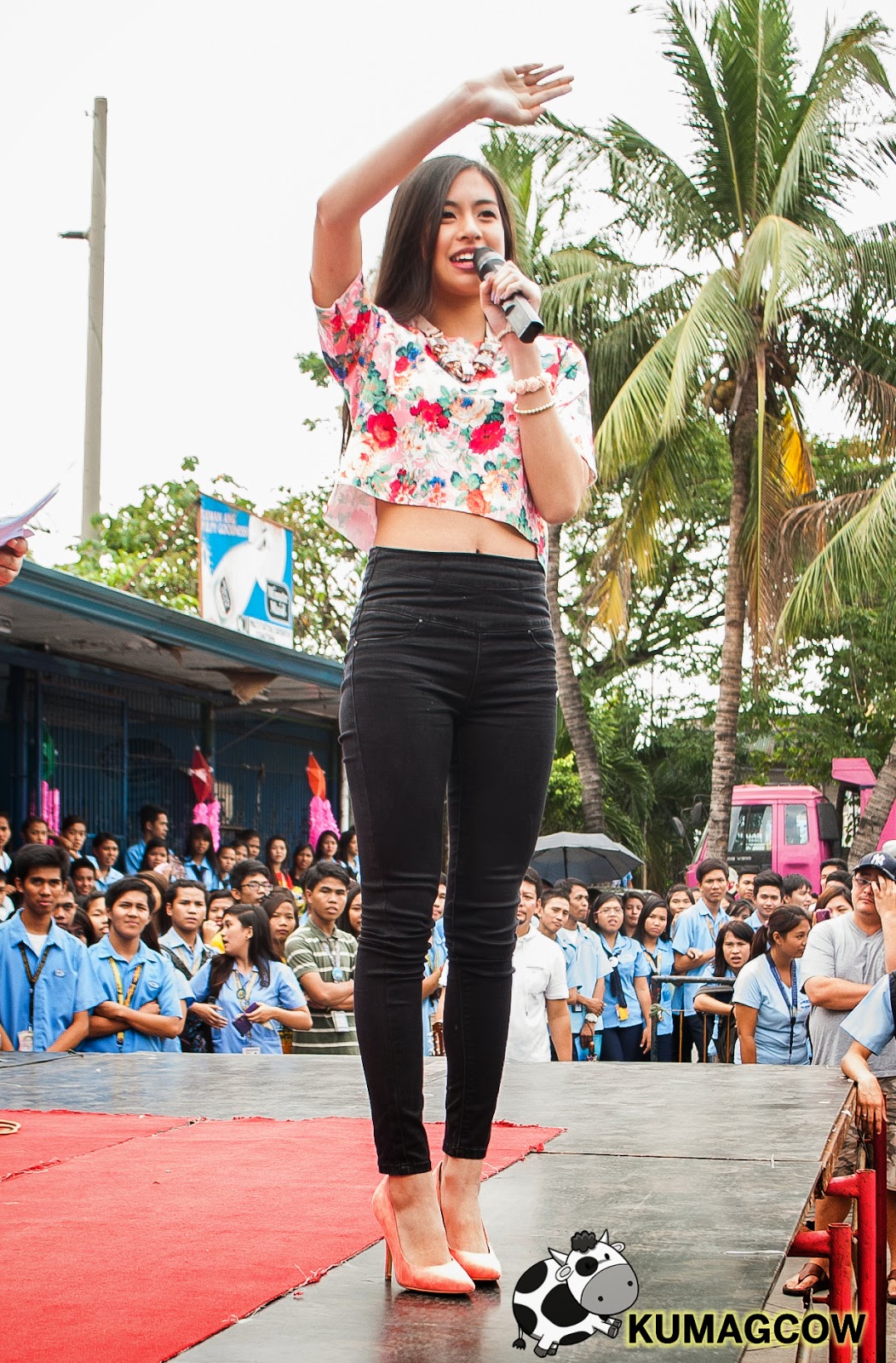 Gorgeous Gabbi Garcia then arrived on stage. She was so pretty that day and of course, she did us a favor by doing a song number whilst in the hot scorching sun. She's like sunshine, she brightens up your gloomy day with her infectious smile. She's the pretty girl who has brains, and a personality to boot. I love their small stint on prime time and her pairing with Ruru was just magic. Even though it only ran for about a week, the ratings tell a good story. She was happy about it and says thanks to everyone who supported them.

Her real birthday falls on December 2 where she only had dinner with her close knit family. When asked about projects in GMA, she says "They're still planning something. We didn't expect our previous show did that great. This experience was overwhelming, I didn't know CMU was this warm and they welcomed us as we went up the stage. Ruru did something for me, a thing for 16 days. In the beginning I told him he wasn't going to be able to do it but in fairness to him, he's very sweet. I am blessed to have been able to be this successful and we wish this would be something that could make us have more shows in the future. When we watched Seasons of Love, I received so many feedback and it was really good and overwhelming."

He ran up the stage because of good reason, he was hounded by screaming fans and students when his name was called in. He is Ruru Madrid. He's a very good looking guy I might add and a bit playful with everyone. He's a charmer but you can't call him Ruru if he's not doing the regular stuff he's been doing for years, he might tease you until you cry. Play with you when you're not looking, but you understand him because he is who he is. That's the vibe I got from Gabbi when she was talking about him too.

When we sat down with them, Ruru and Gabbi, their chemistry was unquestionable. Their secret? It's because they're not forcing it. Gab says "For now, we're just really close and we're very good friends. We want to focus on our careers, this formula, we didn't expect it. We're trying to improve it, more of us together. When we watched Seasons of Love we didn't expect that and it was overwhelming to get good responses from everybody. Since it's his birthday, my gift to him was a pair of shoes and wallet. Ruru interjects "And she didn't put anything on it, I would have wanted her picture on it at least." then Gabbi said, he knows he can always put my photos there. I know he really likes shoes because I see him always have lots of it. The secret maybe is just working hard for it. I am so lucky too to be paired with him, I can give him that. If we want to do something, it's natural. He's a joker, everyone knows him to be like that. He's not Ruru if he's not like that. I'm very happy with him, when I need someone to talk to, we hang out, we talk almost everyday. Even when he's not funny, I try to laugh because nobody else will" then she laughed while teasing the good looking guy. As for her wishes for Ruru, she says "I wish he wouldn't be corny, I wish he'd be more successful because he's got lots of potential. I hope his dreams for his family would come true, that's all. If he wants to ask me out, he always asks my parents and that's a good thing about him." their families are really very close too.

Ruru says "Everyone wishes for this and we're lucky to be picked by GMA to do a project next year. Perhaps first quarter. We can't divulge yet. All I want to do today is to make her happy. This is the first time to celebrate our birthdays together. In making her happy, I think I've been really successful. We will be doing our best and we're not going to compete with anyone. I believe in destiny, if she's the one meant for me, we don't know but Gab is really not hard to fit that criteria of somebody to love. We talk and that's our time to bond. I like it because she's used to my jokes, even if I'm not funny, she still laughs. I wish, no matter how much love I show her, she would do the same to me (but they both laughed again), no, seriously, I wish she just continues whatever she's doing because I see how she loves her craft. That's what I like about her, she wants to learn, and I hope she doesn't change, being so sweet, not just to me but everybody... I'm not the type that gets jealous too (then they kind of laughed again, I think it's a private joke between them). She's the type that I want to spend a long time with because I already know how to work with her, even if I do adlibs on scripts, she can talk to me, then answer me back without hesitation. I respect her, I think if it all works, I can court her later on. She's a lady that you can always have no hard time being with, she's someone that's very easy to like." then they thanked us after that.

They also donated brand new fans for the school and they will use it for rooms that have busted ones installed. Aside from that, they also held auditions via VTR on the school so if there's promising individuals hidden in City of Malabon University, they could hone him or her to be an artist like these guys who just visited their school. I guess they were just there to give them inspiration, that whatever place or situation they may be, they would still be able to dream and accomplish whatever they put their minds in. Thank you GMA Artist Center for letting us tag along this campus tour! Thank you also to Zagu, Monreo Biscuits, Aquabest, Sweet Escape, Solane, Center for Advanced Dentistry, Ledonne and Unisilver Time for giving gifts to the students too. Til next time!

http://gmanetwork.com/artistcenter
Posted by John Bueno at 3:42 AM