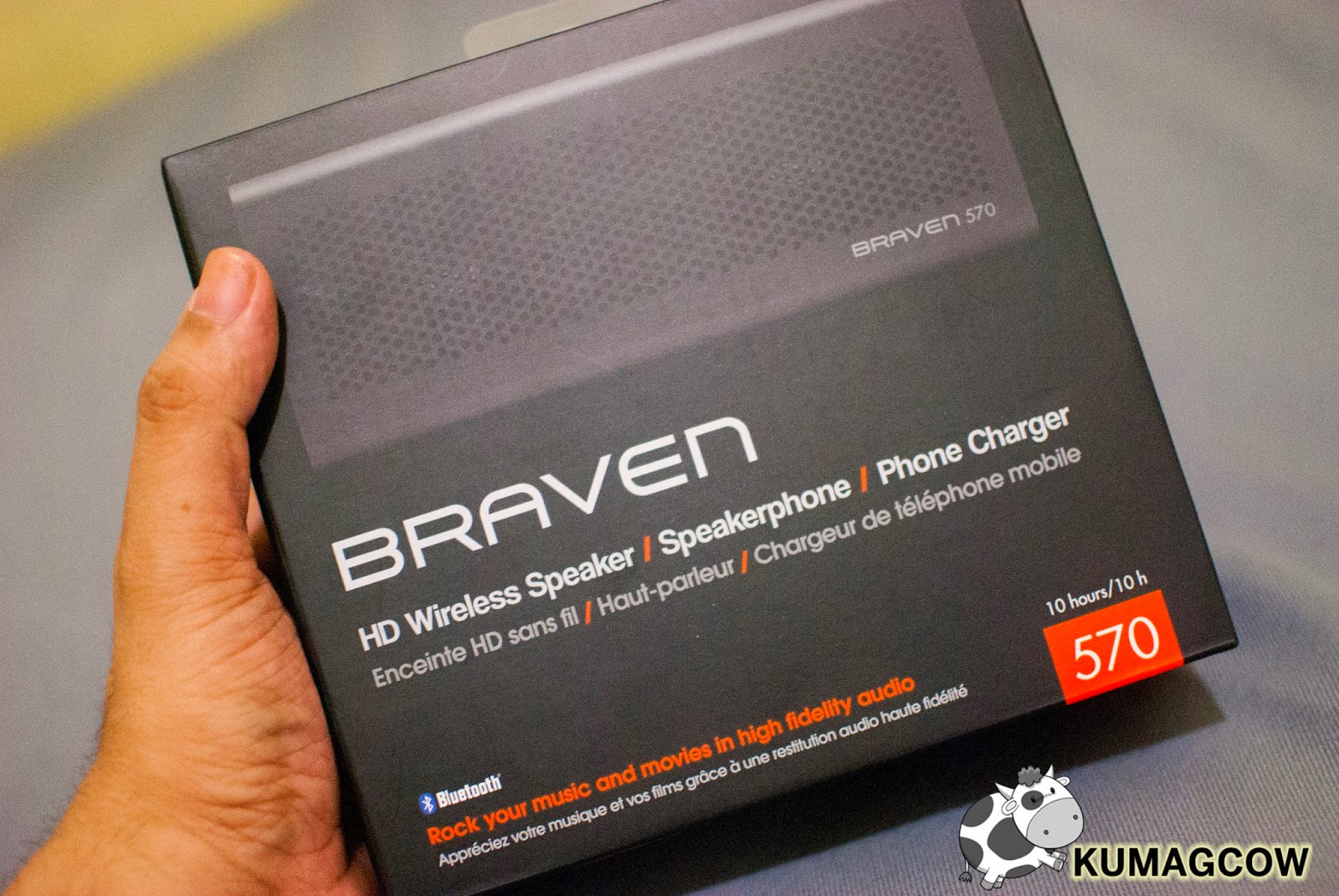 Finding the perfect speakers to be in your home or your favorite travel buddy takes a lot of trial and errors. I have found quite a few that would be able to satisfy the audiophile in me but I guess it sometimes fall short on one category, and that's the number of hours that these speakers work. I have bluetooth speakers that work for about an hour, I have one that works around 4-6 hours but I have never even imagined that there would be something like the BRAVEN 570 HD Wireless Speaker. The promise? 10 hours. Is that even possible (I had to ask)? We went and tested this promising product for a few days.

Just like it's predecessors, this is primarily a Bluetooth speaker. I didn't know until I read the fine print that this is also going to function like a power bank. I think it's also the same reason why it can last a long time, because you can use the device batteries to also charge your cellphones and small gadgets that run on the same specifications.

The black box contains enough cardboard pieces to protect the metal finish of the speaker. It fits the purpose of at least getting the device to you without scratches or dents but with the speaker's build, it'll be pretty hard to do that for real.

The pack also contains two cords. One is the twin 3.5 mm jack, used probably to have another speaker connected to it. The other is for charging the device, from USB to mini jack that you can also use to charge phones with the same port. Since there is a USB port on the BRAVEN 570 HD Wireless Speaker, you can use your own Lightning cable for Apple devices like what I'll be using in this instance.

As for the Braven 570's build, it's really awesome. Now you might think it's weird to have the speakers open in two directions, but if you've got real sound going out of the unit, you don't need the extra bass and go for a louder volume... that's exactly what you'll get from this unit. I tried both music and podcasts so I could differentiate what I'm going to hear in vocals and in different genres of music. If you are looking for deep bass, this wasn't made for that. This BRAVEN 570 HD Wireless Speaker is for REAL non saturated music, no modifications, nothing but the clear music as it should be. Purists who prefer it this way will super like it. As for the loudness, I've reviewed smaller ones before and this packs it like twice of those. After all, this is where that 6 watts of power goes.

Just go ahead and click on the BRAVEN 570, then wait for it to connect.

There's also a blinking blue light on the device signifying the attempt on pairing. It only lasts a few seconds so make sure you do not miss the exact time pairing with it. This could also be the way to pair with it securely because if it stands around like other devices, other people might connect with it just for fun. That might ruin your listening experience, and it was cool they only do it for a few seconds for discovery alone.

Talking about controls, the ON/OFF switch, the bluetooth pairing button, the mini USB port, the 3.5mm input jack and the +/- Volume controls looked very apt for the unit. On the other side, the USB port (for output), the 3.5mm (also for output so you can connect another speaker), and the charging button if you have a phone attached.

Using the Bluetooth connection, I was already satisfied with the output of this BRAVEN 570 HD Wireless Speaker and it could still work in my room which was more than 10 feet away from it. I don't have that much interference in my house aside from the router and it all works like it should.

I also used the cable that came with the package to connect my iPhone 5S powered by SMART to play podcasts straight from the internet and it was amazing. I think it even sounded more crisp with the cable, but even so, either way, they all work so good on talk shows, and HD music on Deezer Premium.

The BRAVEN 570 HD Wireless Speaker also has an output 3.5mm port so if you have another BRAVEN 570 HD Wireless Speaker or other brands that have that input, you can daisy chain it for an even louder set. Heck, you can have a party indoors or outdoors with friends and family with just this and your iPhone. I'm sure that will be so good if you want to carry around something, not those huge ones that you have to rent and pay thousands of pesos for when you can get the best in this small device.

The BRAVEN 570 HD Wireless Speaker also can be used as a Speakerphone. If you're in a group and want the whole place to listen in to meetings, parties where you want the ones abroad to join you, this is a great solution. Aside from that, it's got this USB port on it that you can use to charge your cellphones. Since it's got around 10 hours of battery life, lending a few thousand mAh's for your drained phones won't hurt. It can also greatly work in emergencies when you can't find a power source during weather disturbances like this typhoon weekend.


The new BRAVEN 570 HD Wireless Speaker works as it should and has a lot of other things in its sleeve to impress you more. It works as a speakerphone, a power bank and plays real sounding music for hours of fun with your family. It's also available in Digits Trading branches nationwide. All you need to do is go to their stores and test it out. Whatever is your budget, they've got other Braven models you can choose from to fit that. Don't forget to check out their showrooms because they would gladly assist you in choosing the right stuff that would also fit your personality. These are lifestyle products after all. As for me, I am happy with the BRAVEN 570 HD Wireless Speaker. I held a party yesterday at home using this, fits like a glove! If you haven't thought about that perfect Christmas gift yet for your man, this would be highly suggested!