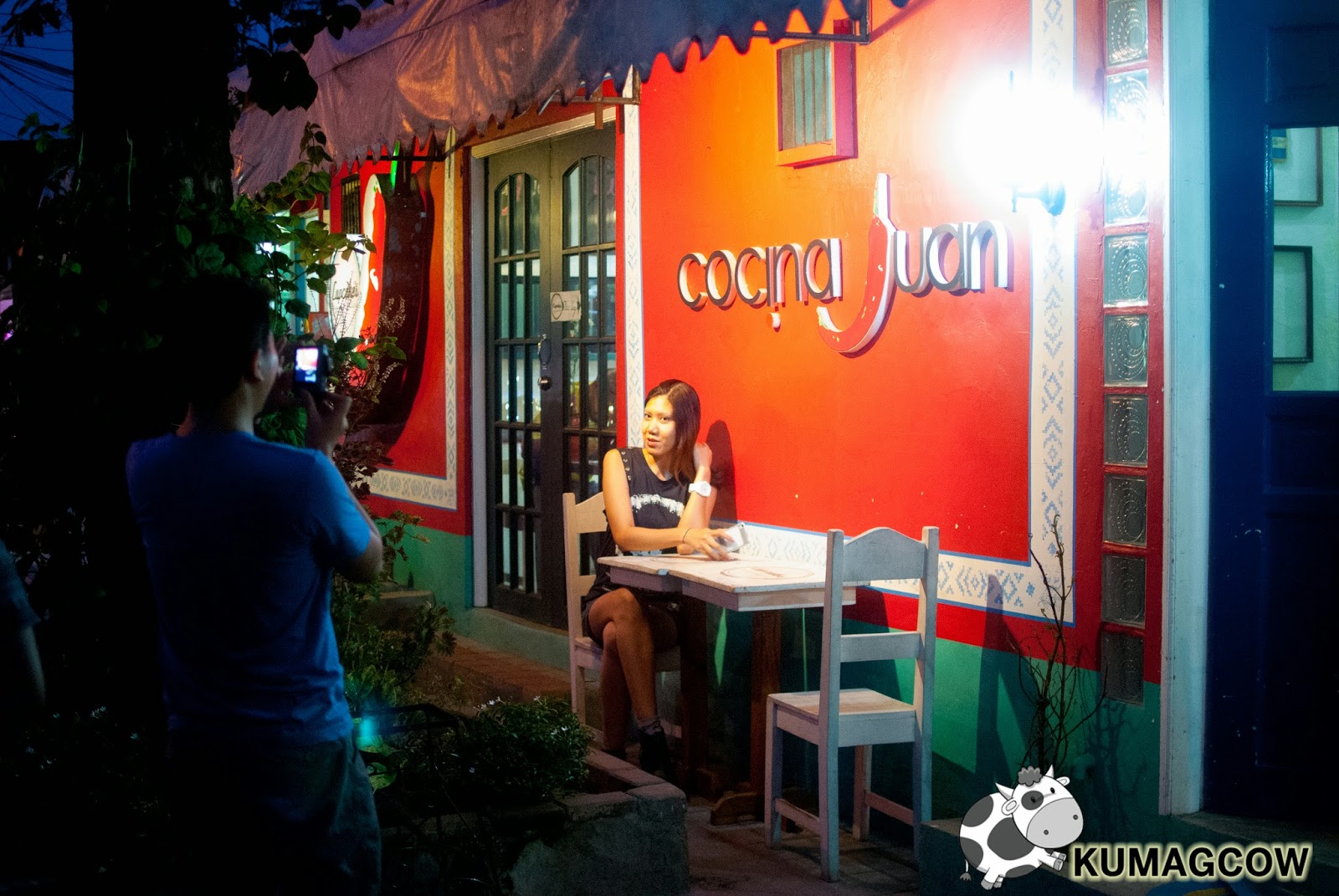 Some of my blogger friends were trying to take selfies outside Cocina Juan. It's on the stretch, at 100 Maginhawa Street in Quezon City. I'd mistake it for a Filipino restaurant but as seen on their menu this would be closer to authentic Latin American cuisine. The interior was rustic, a little mexican going into Filipino shabby chic using a hodge podge of chairs, tables and windows. It's a great place to drink and unwind but they informed me the whole Maginhawa street was barred from serving beer by the local government because of their proximity to schools, though they gladly welcome bringing in wine and the likes without corkage at all. This place is owned and managed by Pat Sodario, brothers Carlo and Tom Adviento. Chef Tom worked in Nicaragua - hence the influence of the food made there. Cocina Juan is one of the stalwarts of the Maginhawa scene and has been in operation for 6 years already. They might have had a face lift but they're still doing good, pretty far from the garage looking setup that they had in the past. Though now, it looks quite nice for new diners, and I think it's time a big crowd experience what they have in store.


This is Cocina Juan's Dinamita. It's made of deep fried Anaheim Chilies, cheese wrapped in a light batter. Pretty good, simple and hot just the way I like it. No fuss, just real good food.

When Nachos were sent in from the sky, Cocina Juan probably did catch most of it. This is what they call Nacho Supremo Todo. Their love for extremes is already showing in the appetizer alone. It's got tons of nachos, meat sauce, frijoles (beans), Jalapeno Chili, their own Salsa and Cheese. This would be great as a starting conversation piece for a group of friends, or maybe if you're going out with your family. It's a party in a platter and they're just starting.


This is simple, their Quesadilla con Tomate just has Tomatoes and Melted Cheese on it. The Tortilla is also toasted on the pan so you get that slightly toasty-el plantsa smell which you would love to have in a Quesadilla. I love that. Dip it on salsa, then it would have that Latin flavor a bit more. I don't even like the taste of flatleaf parsley/Cilantro but I think they only added a hint of it so it wasn't as pungent, that's a good thing. It looks like they perfected these starters because of their years of experience, and it shows.

If that isn't a presentation, I don't know what else is. This is Cocina Juan's Medio Burrito. They've also made this in beef, chicken or pork. It's also got high quality rice (they chose to have it that way), Roasted Peppers, Corn, Salsa and Cheese wrapped around a 10 inch flour tortilla. The Aioli sauce is actually played around the plate to mimic a peacock's feathers. It looks good on the plate, and tastes light and yummy on the inside. The strips of fried tortilla also gave the normally filling burrito some texture so they did a good job doing that. I love this but it could use more sauce, more heat too.

As if the other Burrito wasn't whimsical enough, they went ahead and did a play again on this plate with the Aioli sauce and yogurt. This is their Meat Burrito. It's even bigger than the Medio Burrito which I guess is why they called it as such. It's got the same stuff plus a little element of crunch with the layer of iceberg lettuce. I don't know what is it about their burrito that makes it so light, I think it's with the quality of rice that they make it with. Pretty good.

Aside from the regulars, they've got nice things on the menu that's super perfect for groups. They were not joking when they were talking about BIG servings. This is just one of the varieties of plates that they have. They also have incredible Chimchurri, Pork Ribs, Lamb Chops, Fried Chimichanga (my super favorite!) and practically can cook anything by request as long as they have it inside the store. There's more reason to celebrate at Cocina Juan, you just have to go there and experience the Latin fiesta they can hold in every table, every time you come and visit with your friends and compadre's. I really enjoyed our time there, now it's your turn!

Thank you to wonderful people at Cocina Juan. Thank you also to Food Panda who organized this Maginhawa Food Crawl. You may download the app in the App Store and Google Play or just directly order via web at https://www.foodpanda.ph. They've got tons of restaurants and list the local ones near you including Cocina Juan if you are near... so you can get it fresh, hot and fast. See you in the next one!