Mesclun at The Linden Suites 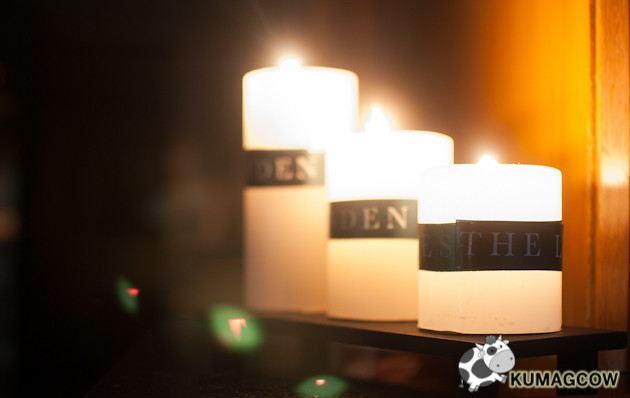 March 28th marks the celebration of Earth Hour in Manila, the Philippines. I know there a ton of people who participated and helped them achieve their goals in the past few years. This year however, they're gunning for something actionable, on how they could give the gift of life and power up the future. It's a tall goal, of which all of us could properly contribute in big - or small way.

We visited The Linden Suites on this day. Consequently, they were also participating in the same cause. Turning off lights to almost all the rooms in this hotel would probably serve electricity for a community even for a few days. They know how this small gesture could affect the lives of our children, and our children's children. 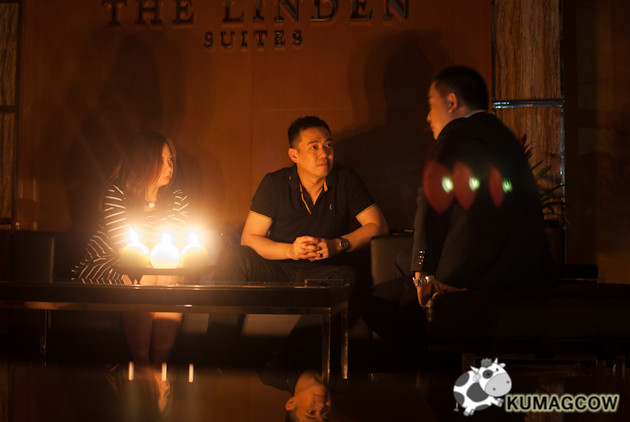 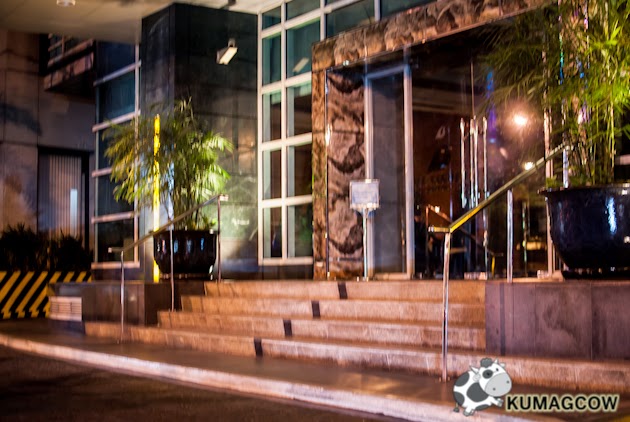 The Linden Suites Geenral Manager Dominic Dorol says "We always join Earth Hour, but this time around, we have re-branded and renovated the hotel. We have a new logo. It's more contemporary, as Linden is a type of tree that most people go under so they can take shade in the North America or Europe. The owners took that idea and put up this hotel so people could do the same. It's owned and operated by Linden Suites Inc. (LSI) that's got a President and its own board. It's fully Filipino owned and has got no foreign investors. This was formerly managed by Swiss Belle International and the owners decided to move forward to become Filipino owned and operated. They got people from international chains and got them all here to maintain the high standards that Linden Suites is known for. All the rooms, public areas have been completed and we're at 98%. We're only doing small finishes and minor adjustments. This is a full hotel, but we do have office spaces from the 4th to 8th floor that have dermatology clinics, solar companies, IT, HMO, and that made us a bit involved in medical tourism also. We have 30% of our hotel dedicated for long staying guests and we have really good kitchens in every room. We've spent a lot to make this place to be more and up against new hotels - we knew we had to refresh our look. 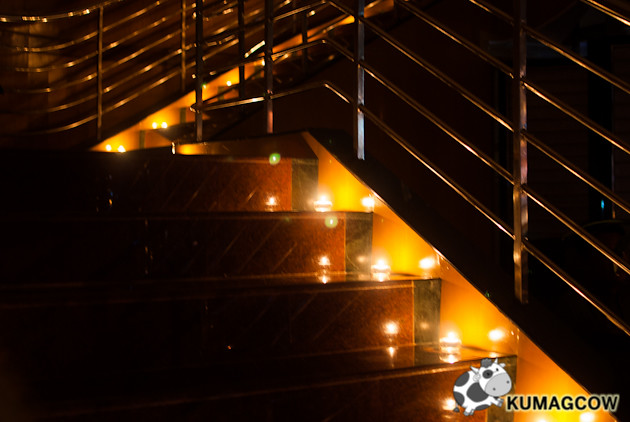 This hotel has made its mark with the former guests, we're slowly gaining them back. The rooms, the hallways, are not dark anymore. We've very fortunate that the owners understood the need to do this now with brand new rooms, facilities, a new logo, on our 15th year. Our tagline now, is "The Linden Suites: Time to Refresh!" which we hope will change the way people would now perceive us, to move forward; and bring back the memories from the Linden Suites before - and add on more. Our lobby, our front office, back office has been freed up because we know our guests deserve all the space. It's now more efficient, people can sit and lounge. We're climbing up, people are noticing the difference and we have to be patient about the occupancy. It'll be 80% occupancy soon, perhaps within the year. 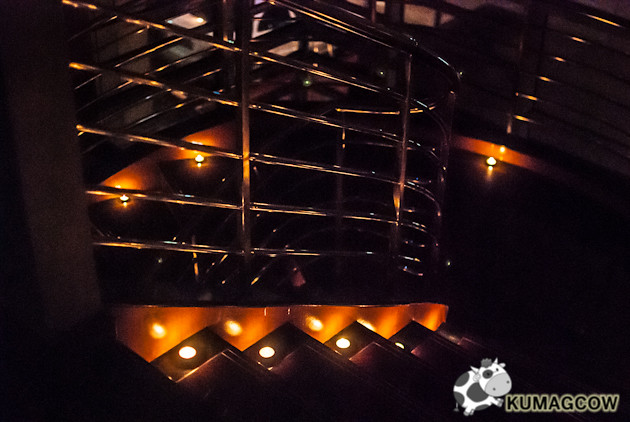 Being a business hotel, we're very attractive because we have big rooms. Even families love this on weekends. We have 2-3 room spaces, plus kitchens so it's the best place to be on staycations. We want this place to be known not just for the service, but the look, the colors, the small details, of which hopefully, it would all be appreciated by the public. We're also looking forward to the evaluation of DOT which will happen soon, we want to follow their very strict standards. We're doing the checks right now and perhaps third quarter of this year, we'll have the same 4 star rating we had before.

We have an events place in the 4th floor that can hold 150 guests, but the roof top will be an additional location we can offer to companies and hopefully everything will be done soon.


Mesclun is our concessionaire and it is run solely by them. We've had them for 2 years now. They also have a branch in Serendra and Eastwood. Whenever we invite people, we have them here in Mesclun at Linden Suites. We've been very good partners with them but very few people know they're here in Linden Suites, hopefully that will change."


Mesclun at The Linden Suites


Mesclun is a salad mix of green leaves, mostly of which originated in Provence, France. This restaurant and cafe named after it sits at the 2nd Floor of The Linden Suites at 37 San Miguel Avenue, Ortigas Center in Pasig City. We had their best dishes and tried to see what more they had to offer. It's also my first time here, so I wasn't really expecting something upscale and refined from this place. I had a lot in mind, like what cuisine they served to what different dishes would come out of the kitchen. Though judging from what I saw on the lot, it looks quite promising. 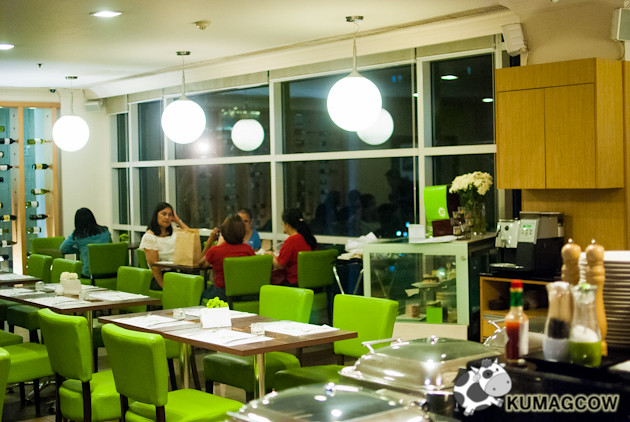 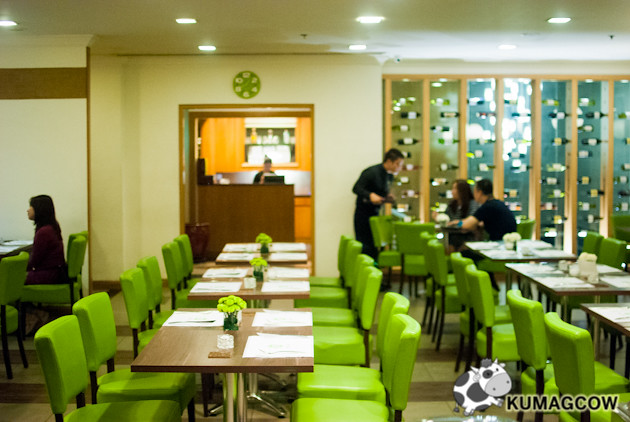 The place can sit around 60-80 people.They've got green all over the place like the salad combo it was named after. It felt cool and cozy. 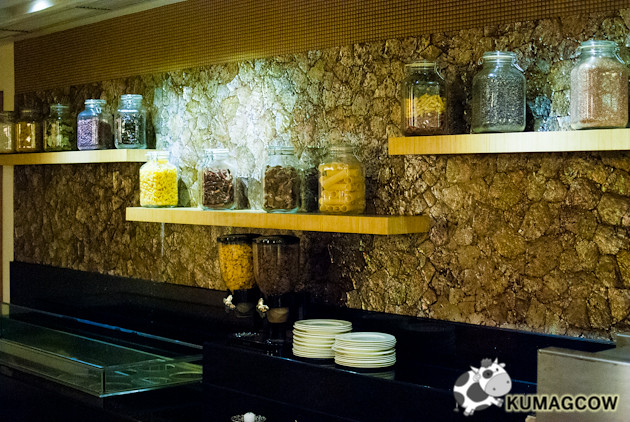 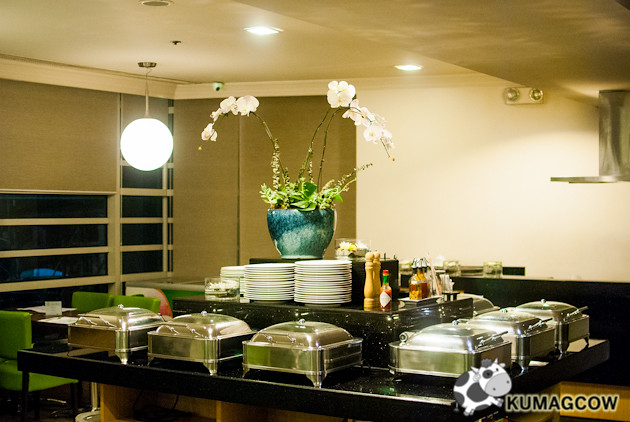 I was there during dinner, but I guess this serves as their buffet during breakfast. The restaurant space is just alright, not cramped and they've used it quite well. Service was very personal, I think they go the mile talking to patrons so you'll feel right at home. Acoustics are a little off because I can hear the next table quite clearly (even in Fookien), a little something that you get because seats are close. 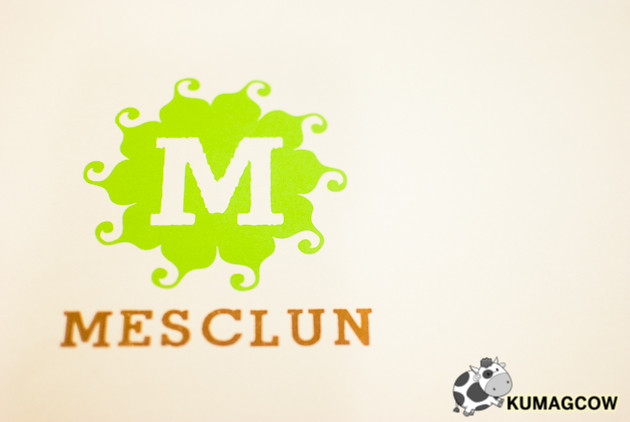 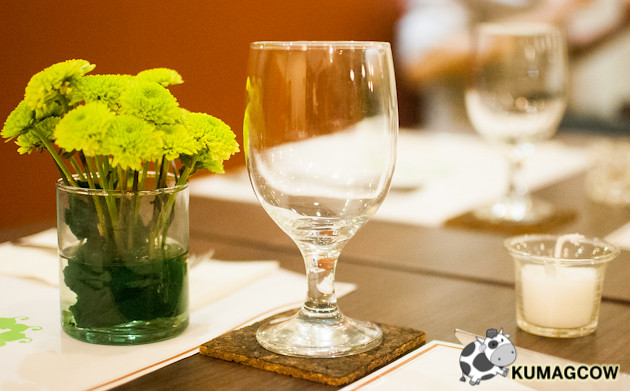 Unfortunately, I think this falls on classy and sophisticated rather than just casual. That's a good thing though, so it can be something to impress your friends and family - if you plan to take them here. Which comes to our next subject, what to eat?

Mesclun serves good food. No, let me correct that, it's good comfort food. Although some might say it's a bit pricey, some items on their menu are really worth trying. Especially the adobo, totally worth every cent! 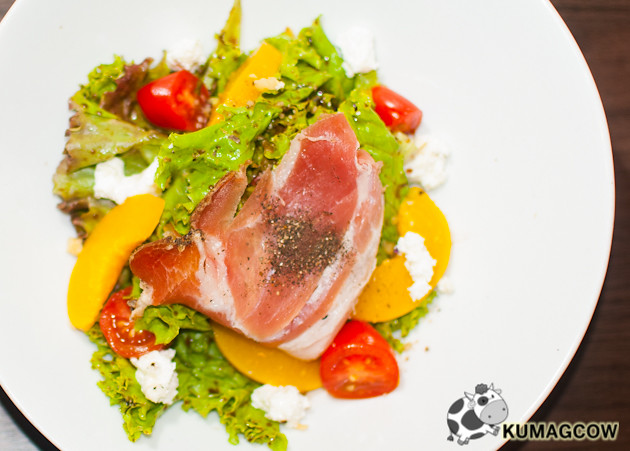 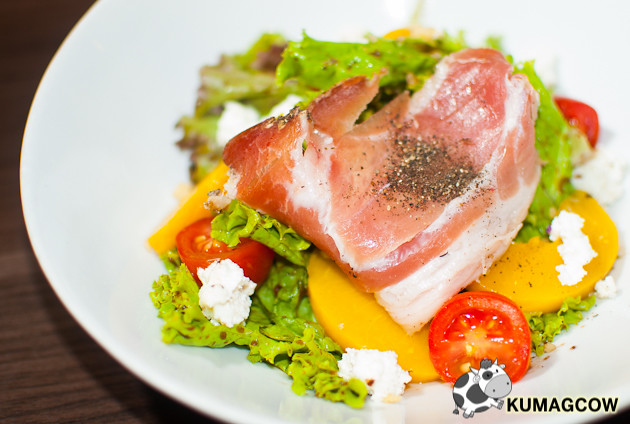 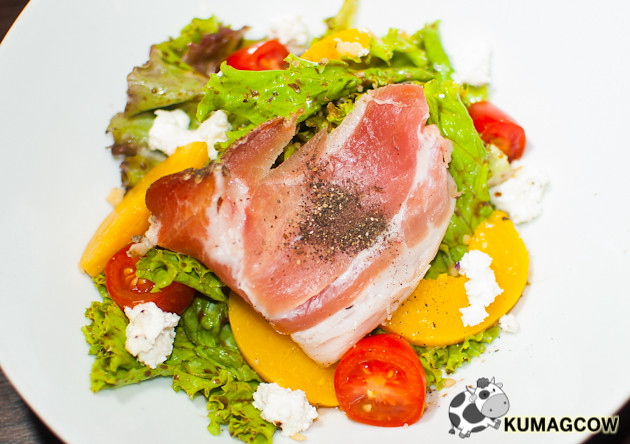 This is their signature Mesclun Salad, one of their best sellers. It's got Mesclun greens, a few peaches, speck (which is a fancy English term for fat LOL), cherry tomatoes, feta cheese, walnuts with raspberry vinaigrette. All in all, this is something really good. It's not that sacrificing. Ladies need to indulge a bit and if they want to order a simple salad, that's not that simple at all, this should be it. You've got it well seasoned, different textures, crunchy and fresh. 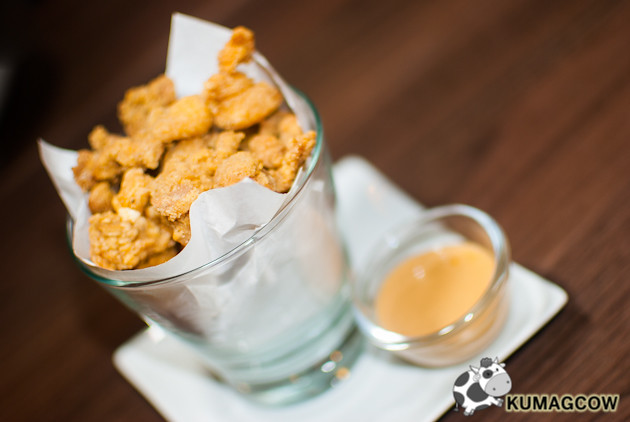 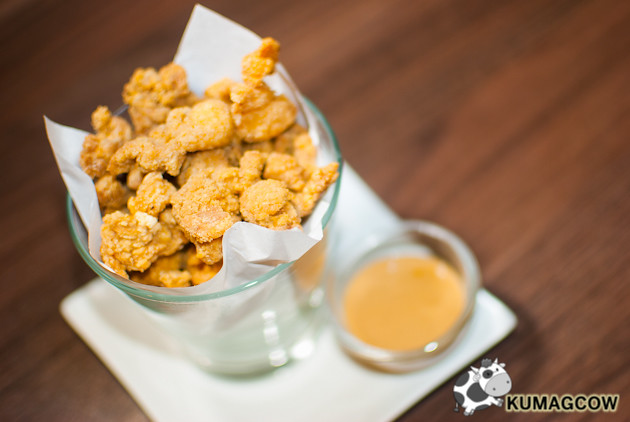 For appetizers, this is Mesclun's Yakuza Chicken. It's Japanese style breaded Chicken Fillet pieces served with a side of Katsu sauce. It's quite close to chicken poppers but the sauce makes the difference. It's nutty, more on the sesame oil side of things, although I would have loved that part to be a tad more intense. They had it light most probably so everybody else can have it. It was worth ordering though, I liked the crunchy chicken the most! 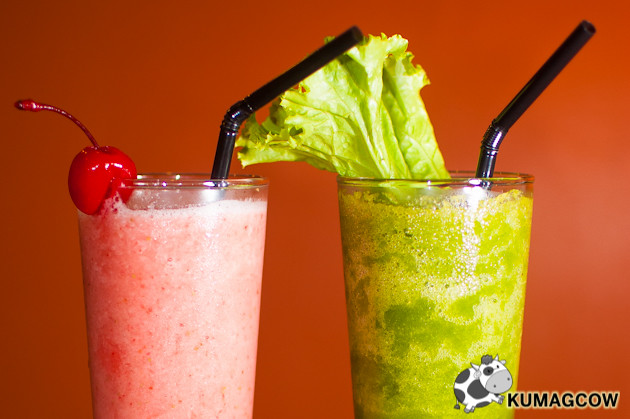 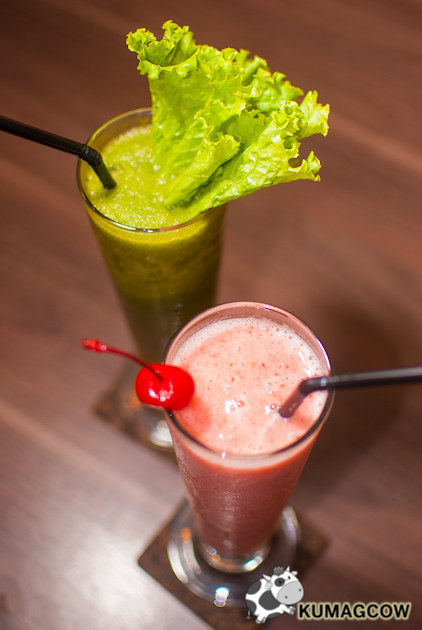 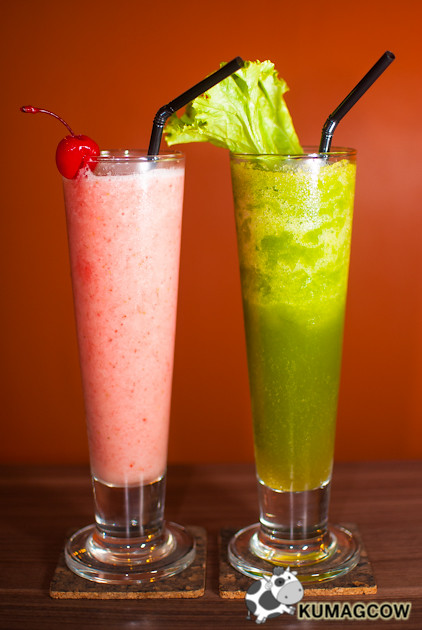 Two drinks were served. I had the Strawberry Banana Smoothie whilst the other one is their Power Shake. The first one is actually straightforward, made me pretty full actually and we haven't had the first course yet. The Power Shake was refreshing. It's got veggies in it hence the green look. Order the Power Shake to start your day and it'll make you a bit more energetic. The calamansi takes it on a tangy profile, we liked it a lot. 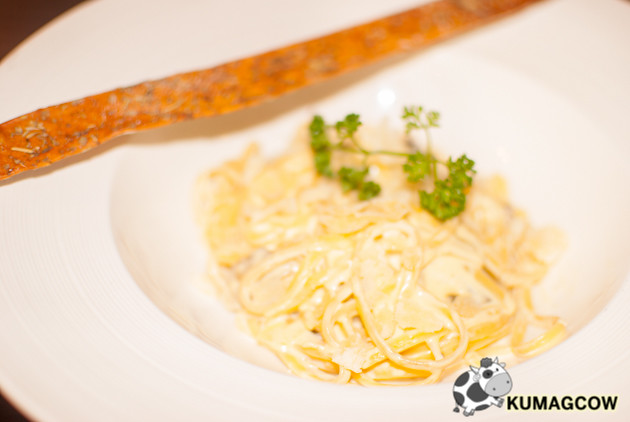 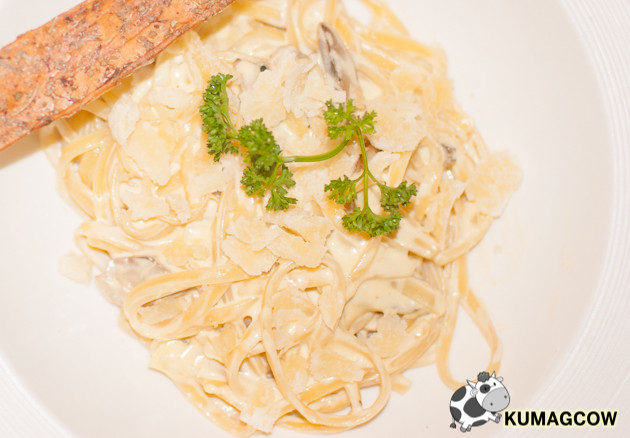 This is Mesclun's Linguini with Truffled Cream Sauce. I like pasta, but I love truffle the most. It's almost next to foie gras for me. This dish though only had small hints of it. The cheese would definitely help bring in a little saltiness on the cream sauce as it needs some of that. It's a good thing they had salt and pepper nearby that could fix that. This is one of those comfort foods I told you about, simple, and it tastes amazing. You could be alone and still enjoy it. 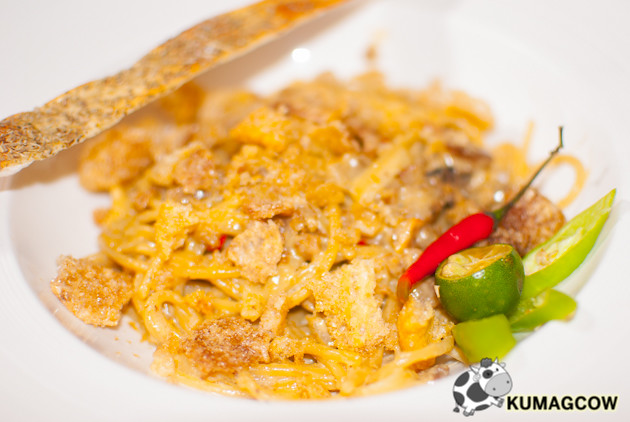 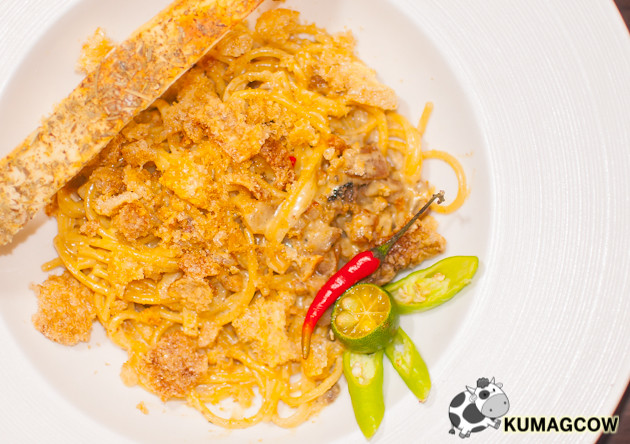 Fusion that's a little off the hook, this is Mesclun's Sisig Spaghetti. You might think they're out of their mind but honestly, it works. I love the flavor profile and what they want to do with this. The thing is, they served not so crunchy pork rind with it. I can imagine though if they did serve it with more freshly popped chicharon, it would definitely be insane not to love something like this! It's spicy, creamy and it's comforting. What's not to like with pork? 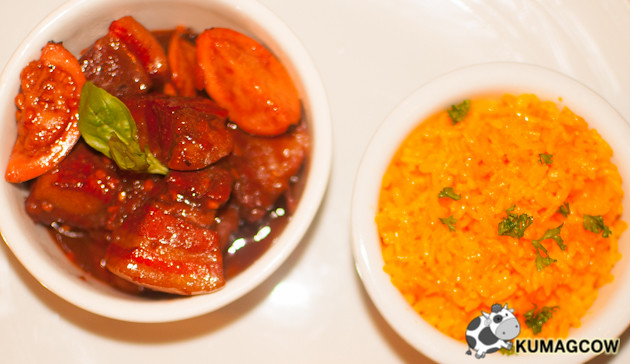 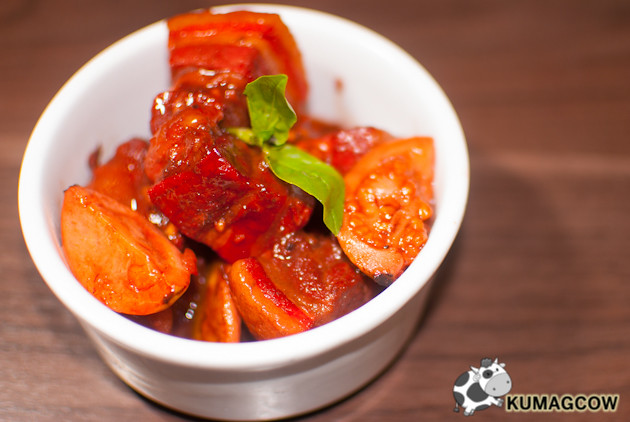 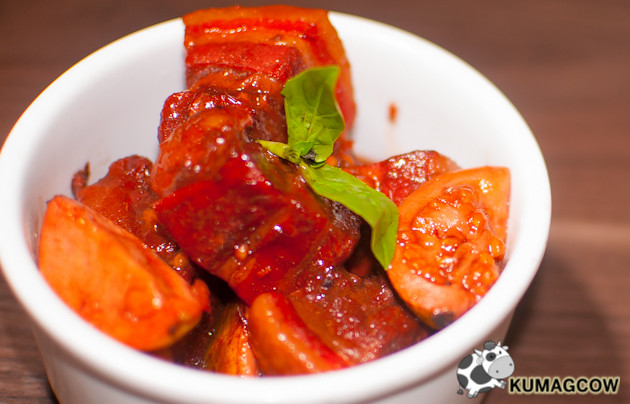 Slap yourself silly. This is my favorite on their menu. This is Mesclun's Guava Pork Adobo. It's not the usual pork adobo, but it's super duper good. I think adding the Guava fruit was something really good and might have something to do about tenderizing the meat in that way. They also carefully removed the pork skin on the premium pork slices and had us play with something sweet, tangy and salty in the mouth. They serve this with a rice pilaf and some pickled strips of veggies on the side. The flavor and aroma filled the room when they came out of the kitchen. For me, it was unbelievable. This should entirely be their flagship dish, and have it's own page, no zip code on the menu!


We can't leave the place without trying their desserts. Two things, the first one is their Japanese Cheesecake. It was a bit on the fluffy floury side, not too sweet and I might suggest this to your folks or the elderly who don't want it too sweet. The tangy jam, the whipped cream made it whole, making the cake not bland at all. If you're up to something sweet, get the Almond Roca Cake. It's super chocolatey and if you're looking for something that you could close your eyes with every time you put that fork on your mouth, don't leave the restaurant without tasting it or their Strawberry Shortcake which wasn't there anymore because a lot of people probably ordered it. Make your own tastebuds decide.


The new things in The Linden Suites made me even more excited to experience how it would feel to spend the night there. A little background music, a few days more and they're going to be an even better hotel than they were before. You'll be back in a place where everyone else wants to hang out. To fabulous feasting, fun, not a dull moment should ever come from The Linden Suites or Mesclun. Things are about to change and they're getting even better. You can visit The Linden Suites today by calling +63 638 78 78 or visit their hotel right at the heart of Ortigas Center. Again, it's at 37 San Miguel Avenue, Ortigas Center in Pasig City. Call the same number if you would want reservations for Mesclun too. Make that sensational stay today at The Linden Suites because it's always better with family. Make that delicious breakfast, lunch or dinner at Mesclun too. Trust me on the Almond Roca Cake.

For more information about their restaurant and hotel:

http://www.lindensuites.com
Posted by John Bueno at 2:36 AM