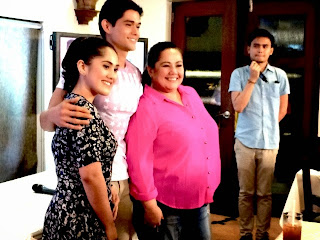 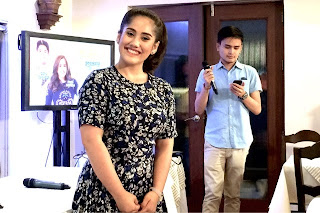 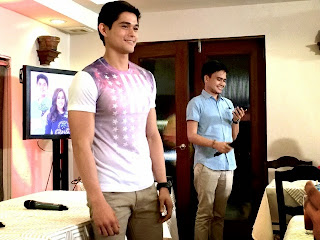 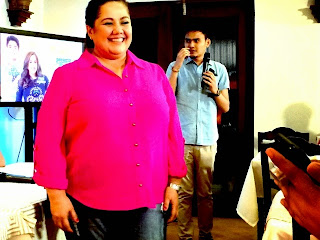 We met the cast of Wattpad Presents: Lala Laitera yesterday at Mario's Restaurant in Quezon City. It's  been a while, I know. Though I was kind of excited because they're introducing Toni Aquino, she's the daughter of comedienne Ruby Rodriguez. The proud mom is also appearing in this week's episode and she's not actually playing to be Toni's mom, quite opposite in fact because she'll be punishing her several times in this show. Aside from these two, Carl Guevarra will also be playing Toni's love interest in the series. Lala Laitera basically talks about Toni's character who will be shooting tons of hurtful words to people she'll meet in the school, home and the community. They want people to learn the value of humility, respect, good manners, all in a week's episode. 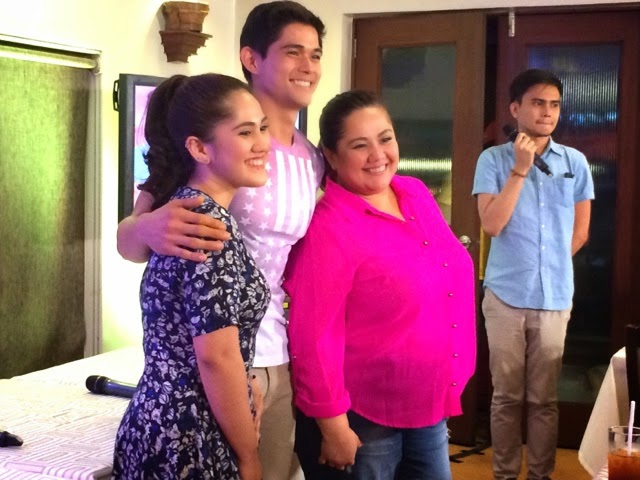 This is the first time that Toni is actually appearing on a series but she's always been doing birthday greetings in Eat Bulaga, or when it's Mothers Day on the same show. Back then, she was offered to actually be part of showbiz but her mother Ruby didn't see it was the right time. Ruby wanted Toni to finish her studies and if she'd still be interested when in college, that was the time she allowed her to. Toni admitted she was really hurt at that time because she did really dream to become an actress. She also did some small stints in school plays and theater group Trumpets (remember Monique Wilson's group?) so being on stage wasn't a problem. Ruby also attributes Toni's confidence stemmed from her exposure to Eat Bulaga and the whole Dabarkads because from the time Toni could go out of the house, she always had her in the studios and got Toni to talk with other hosts of the show. Ruby was probably going to get worried because she knew her daughter would be subjected to kissing scenes in Wattpad Presents, as the show is kinda romcom. Toni told the press that her Mom wasn't there during the first kiss, consequently mom Ruby started talking about a cute story after that.

Ruby laments "You see, Toni's Dad used to play basketball for leisure. One day, Toni and another friend tagged along and spotted a cute guy in the court whom they didn't know at that time. That guy was actually Carl Guevarra. Who wouldn't be crushing on this guy right? And after that, when they offered this series to Toni and she knew who she was going to be partnered with, they went bonkers! I feel he's their ultimate crush, and now he's going to be Toni's first kiss, choosy pa ba?!!" she adds.

As with the title of the book, teasing and using hurtful words would always be something that they have personal experiences with. People called Ruby names, and she did get used to it. Toni however in an anecdote said she heard someone from her school call her mom names, she got teary eyed and said she mustered up the courage to confront that person that time to hopefully educate them. She's okay now but if it's about her mom, she felt it was really something else, much like bullying. She didn't find any reason why a person would call another person's mom names.

Admittedly, Ms. Ruby said she thought of keeping the weight down (well we've all seen her do it successfully right?) but every time she did, she felt it was a struggle and she kept on getting pregnant after thinning down. Now, she's relaxed and she's always telling Toni to keep herself a little thin by jokingly pointing at herself sometimes and Toni gets it. Ruby trusts Toni a lot, even gave her what wise words she learned from her own mom, to know her limitations even if she's not there.

Ruby knows Toni is going to another market. She's not in the direction of being a comedienne but more of an artist that could do everything. It was really a treat to hear them tell us these personal stories in between.

I find Carl really very friendly. He's also very inspiring. Did you know he used to weigh 240 pounds and had a size 38 waist? Look at him now. I asked him personally and he said he really did the work. He did diet plans, really rigorous workouts, he was just so lucky he got in the Be Bench thing because it was his brother who wanted it really bad. Things are really going his way and when asked why he's not sticking to a person paired with him, he said that's how he wanted it to be. He's very practical and adds if there's a job he needs to do, he's just going to do it. Actually, he's been branded to be the one to always be the first guy to be with when there's a new lady to be paired in Wattpad. I think he's been with them all! Working with Toni he says was easy because he didn't find her nervous at all, he praises that Toni is someone who loves to do this and she's a ball of energy even in the wee hours of the morning. They only took one workshop and said it was easy to get her, to let her feel comfortable. He also can't wait for people to see their story unfold in Wattpad Presents.


Toni is excited, she hasn't really heard about what other things she's actually going to do after this week's episode. They have different managers and Ruby doesn't have any plans of being a stage mom. She knows Toni can hold her own flame. Toni on the other hand hopes that her (Toni) Mom would be ultimately proud of her (as they already are), that's her ultimate dream and she would like to achieve that real soon.

Wattpad Presents: Lala Laitera will be shown from Monday to Friday 9PM on TV5.