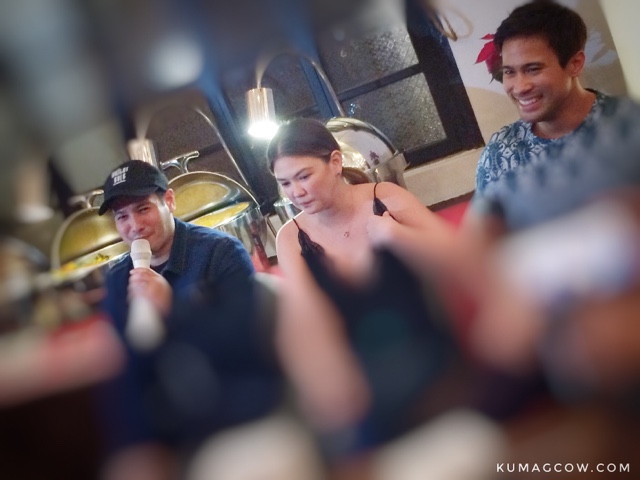 Had the chance to drop by the launch of Bright Bulb Productions and "Malaya"(Free) which is the new MTV of talented singer Moira Dela Torre. This has been part of a soundtrack for a movie they did a couple of months ago but they didn't have a music video with it and they started it off. Sam Milby has been good friends with Moi, John and Angelica so they decided to make this their first official venture under their new production company.Moira is definitely the talk of the town because of her songs which recently gained airplay plus "Malaya" climbed up the Billboard Philippines charts so they felt it was just the right time.

John Pratts directed the shoot with a single camera on hand and he says "While editing it we felt that the emotions was right, this was Moira's personal story, a song that was for her Grandma. Freeing someone is hard, but you have to let go even if it's painful. It was easy to direct them because you can tell them what your vision is and they give it in one shot. It wasn't sad during the shoot. I think on the scenes, I caught them on the most vulnerable parts of their lives. I want to make them a part of the cast and make a concept that would be perfect for them. It was just awkward at first but since they are involved in production they gave it all and more because they are invested in it."

Angelica had a hand in the creatives and says the process was pretty easy since she was working with people she already knew, she adds "For me if you love someone, you have to fight for it but never force it. If they don't want you, it's not real love if you don't give them their happiness. I was a bit shy when those kissing scenes happened but it was inspiring to actually do that. When I started kissing him I didn't want to stop. It was addicting. (Then they laughed) The scenes in Moira's MTV was more of an open ended wide conceptualized thing so in a nutshell we just did it without any scripts. We just talk and execute. We didn't use any personal experience or talk about it otherwise we would have all gone home and packed up the shoot. The things we do elsewhere, it was raw and people could relate to that. It was just good to do it. I didn't have an awkward phase but just followed their direction because I know how to put up a wall between professionals and friends."

Sam Milby was in good spirits, he gamely answered he plethora of questions about love and letting go asked by other people in the small talk and says "It must really be that way, if you love someone you have to laugh about things. It would be more okay to free them if you value yourself. I don't know where to cry, I was just sad there and on the scene you just have to be mum. If you are guilty you just don't have to say anything just like what happened there. For me it was awkward at first because I never worked with him in that setup, but since it's a music video it was light even if the song was so sad. It came out fine because we could communicate easily. We know our own strengths and we work quite nicely and I even do tech, so I suggest things. That's how we work together."

For those who want to see the video, here it is as posted on their Youtube channel:

Saw this already earlier and I think it was awesome. It had that raw feeling that takes you in the situation, Angelica and Sam both had us engulfed at the flames of their pain, his eyes of guilt included. You'll see more of this and their future works because by the looks of it, this is just the start. Perhaps soon, they'll get to do short films, full length ones and release it in movie houses.

They assured us they will.