I've had a ton of stories with Converse in mind, but the ones with White Chucks on them stand out.

I always had an inkling with colored chucks because I'm the OC type. White Chucks for me meant it was going to be hard to maintain, I would be horrible with it because it would be full of mud and stuff in just one night. So in a nutshell, I've never owned one like now. One that was close was a little off white (which was plain canvass which was released a couple of years ago). During sale events of Converse, I usually buy those that have really loud colors, really funky designs and did shy away from white ones because I knew how hard it would be to actually keep it. Although I've often wondered why people have continued to HOARD the classic white chucks ALL THE TIME whenever it's on the shelves, I've seen a LOT of people get it by huge bags full and I'm not even joking!

Converse must have been alarmed about what I was thinking and told us in a big event at Le Reve in Quezon City that the famed WHITE CHUCKS can go with ANYTHING. Now that's a BIG pronouncement right there and honestly I do have my reservations, but you know what? I've seen people with WHITE CHUCKS actually do it for real. During the event, they set out the whole venue to hold the CONVERSE WHITE PARTY, figured they can dress anyone and still pair those White Chucks with anything. Case in point, my blogger friends Ruth and Rodel (photo courtesy of our friends from NognogintheCity.com):


Now I've seen it all, they were clad in different colors like red, blue, yellow, but all confidently carrying these clothes with the right kind of shoes, it was like the WHITE CHUCKS was meant to be word with them. They're absolutely right, these white chucks CAN go with anything!

I wore these shoes during our high school reunion last week and it was like nostalgia. It fit right in with our 90's theme and if my hunch was right, almost everyone in my class had their own Converse shoes on too. With GREEN hair, BROWN trousers, GRAY shirt and a LEATHER jacket, it all fit right in with my look that evening and I was getting complements left and right. It didn't matter when I was already looking like a COLORWHEEL that night because I wore that lovely comfy pair. It still went with my look... and I was happy. After the festivities and drinks, I got a little woozy, I looked at my shoes and it had smudges on them.

I stood up and went to the men's room, pulled a couple of paper towels and poured water on it. I gently wiped the dirt off, while my classmate went in and wondered why I was frantic, why I was on the floor doing all that. He knew what I was doing and said "Hey man, don't worry too much about it! It's WHITE Chucks, it's supposed to be dirty because without it, it won't have character." then went about his business. I guess he's right, I shouldn't worry about that at all. I mean I am really too worried about small things and he's right, after a few days I've worn my Chucks with all that dirt. It still looked fine, and people don't even bother. It now has character. :) 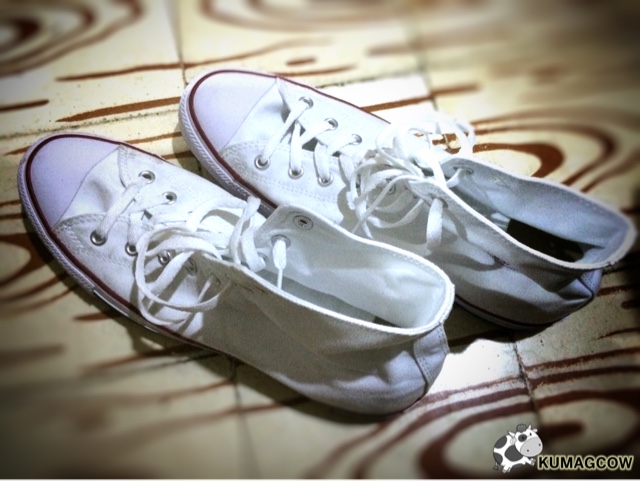 CONVERSE is right. The WHITE CHUCKS goes with anything. You might be a skeptic like me, but with all those days I've worn these, it has been proven. Now for those who also want news from them, I've heart they also have released the second wave of TYLER THE CREATOR's collaboration with Converse.


This is part of the new Golf Le Fleur collection and is now exclusively available at Converse branches in Commonwealth and SM Aura for only Php 5,990.