Brace for A Different Morning Show: Ethel Booba and K Brosas for LAKWATSIKA 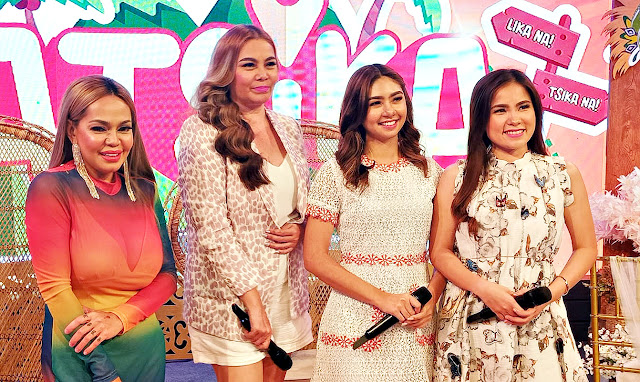 Looks like the morning show time slot is going in for a big surprise as Cignal Entertainment and Red Crane Studios launch this one of a kind program called LAKWATSIKA. This is going to be hosted by funny comediennes and talented singers Ethel Booba and K Brosas.

Just hearing their names tell me this is going to be a heck of an adventure, and that's not just the premise of the show because unlike any other morning shows, this includes traveling, funny antics that happens without scripts and talking to people, just like you and me.

In their first episode, they have traveled to Cauayan in Masbate. With picturesque shorelines, flora and fauna, they found a new destination for local and international tourists... places that are seldom visited and are just waiting to be discovered (of which this is what they're planning to do in the next ones). This is the same reason why they partnered with the Department of Tourism so they can take you to see places, every small city, town, a roadside stop as they promise it will be a little unplanned in each episode.

Not only  that, they'll be tasting the exotic and unique dishes... tell the story of the people they visit which is going to be very exciting to see on television. After a tiring talk and travel, they're also going to undergo several challenges in a day just to make sure they're on top of their toes, plus they'll be giving time to get to know townsfolk, which Ethel and K told us was so touching because they've never felt so welcome til they experienced it first hand in Masbate.

They also have digital hosts Queenay and Marimar Tua who will tell the stories for the digital audience because this will also be shown in TV5 and Cignal's platforms as well.

Here's our video coverage of the presscon, so please, enjoy!

I love how K Brosas commented about their friendship, she didn't sugarcoat anything and told us while they were not that close (while still friends), they're getting to know more about each other now especially because they bond over parenting (Ethel gave birth recently and they talk about kids now). If you're up to it, go watch the show on April 18 at 11am. This will be shown everyday so you've got lots of time to watch it. This will surely be fun!