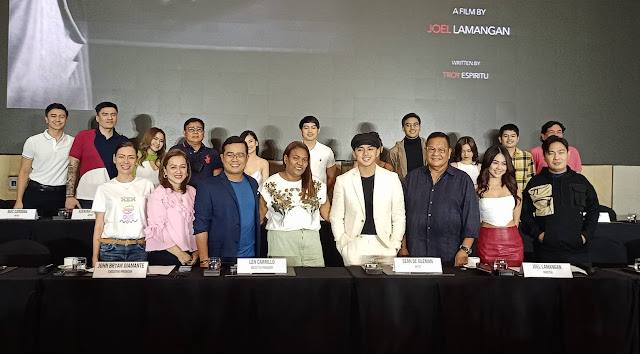 It was such a pleasure to see fresh faces for the upcoming Joel Lamangan masterpiece "Fall Guy" (this is still their working title). In a grand story conference this evening, producers Ms. Len Carillo of 3:16 Media Network and John Bryan Diamante of Mentorque Productions had us see a glimpse of this upcoming movie written for the screen by famed Troy Espiritu.
This stars the good looking Sean De Guzman who also starred in previous Joel Lamangan film "Anak ng Macho Dancer" (Son of the Macho Dancer) which was his launching film during the first quarter of last year. He also did Bekis on the Run (Gays on the Run), Huling Baklang Birhen sa Balat ng Lupa ("The Last Gay Virgin on the face of the Earth" which have yet to be shown on theaters) and Island of Desire on streaming platforms. 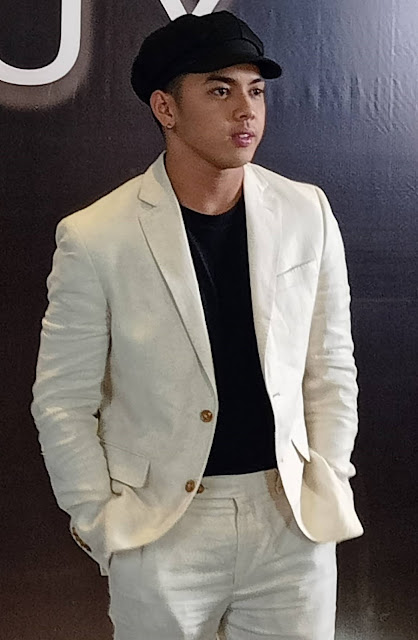 He says "Honestly, when I was informed that I was going to do FALL GUY, I was nervous, I had self doubt because the role was super heavy. I knew that I really have to work on how I portray the role as it is very different from the films that I've made in the past. It delves more into drama. You can say this is my attempt to crossover to a different genre. Not that I'm quitting making those kind of films, I just want to take on different roles and learn from them. I wouldn't want to put limitations,  Who knows, you might be seeing me in action films in the future."

Direk Joel says "I am the one who went with him on his journey as an actor. Why did I choose him? Because I saw potential as an actor, intrinsic traits of a good one. It can be developed into something big as a lead for a film. That's what I see in Sean. When the opportunity came for me to make a film for him, I didn't bat an eyelash. After working with him in previous projects, I can say he will deliver. I've seen his growth as an actor and this movie will surely showcase his versatility. I have never doubted that from day 1. This is a good story of a young man who didn't like where he came from, because they're poor, and this is what happens if they follow a life with lies. I know Sean can do something like this, and people can learn from it."
Aside from the films mentioned earlier, Sean has also been busy with other films and series under the Vivamax brand. He also made mention of how he's really eager to work with Cloe Baretto of whom we've interviewed a couple weeks ago. They've been friends for a while now and just joked around about who wanted who. Needless to say, they've been looking forward to do a project and this has just come in to fruition.
FALL GUY also stars Ms. Glydel Mercado, the legendary Shamaine Buencamino. Also in the cast are Vance Larena, talented actress/writer Quinn Carrillo, Marco Gomez, Karl Aquino, 80's icon Ms. Tina Paner, Jim Pebanco, Pancho Carrillo, Mark Cardona, Tiffany Grey, Azekah Alvarez, Nisa Ortiz, Hershie de Leon and Itan Rosales. As you can see, they're not shortchanging you in the acting department, you'll be seeing another Joel Lamangan film that's worth watching when they finish the shoot. Follow their social channels to know more about the project.