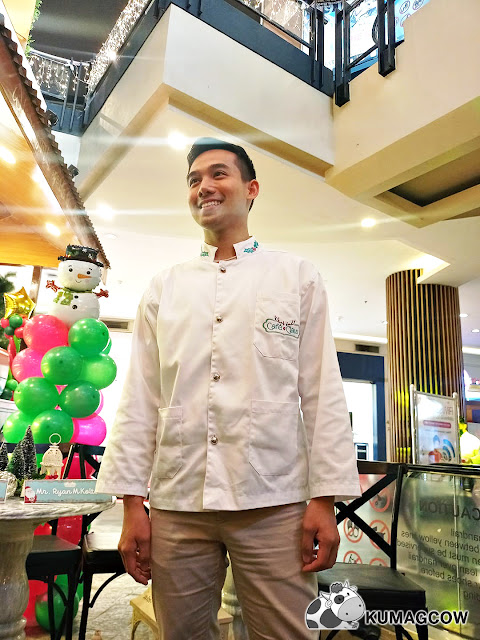 Just left Greenhills Promenade while writing this piece as I've attended the launch of CAFE CLAUS at this location, their second one after putting up CAFE CLAUS in Tandang Sora QC. For Ken, this has been a pretty memorable place because his tatay German Moreno aka "Kuya Germs" used to bring him here to unwind and have fun when he was still alive. The new branch has a German Christmas theme as they wanted a different one in every branch they put up, and yes, talks are in the works for putting up about 3 more of these within the year.

Ken and his partners are ecstatic that the first branch is doing well and they've been able to study the market well even if we're still under the pandemic. Food served in this branch still has the classics but will have some special items in the menu that would represent the German them they are executing for the Greenhills branch. We talked to Ken, his partners and chefs about their future plans which seem so exciting especially for those who are in the look for a coffee shop that would make them escape reality while having a cup of joe in their shop (even for just a few hours). Here's what transpired during the launch!

My only question was, is he building his empire? Ken says "I don't know if it's an empire or not, I'm just venturing into businesses that I love, ones that I have passion in and if that means it'll all be successful in the near future, I'd love that!"


In the press conference, they also have confirmed reports about building branches in Eastwood City, Tagaytay City which will also have different themes. So if you're a fan of Ken or just love Christmas, you've got several places to go this year as they expand CAFE CLAUS in Mega Manila. They also have plans to put up one in nearby provinces, pretty soon in Visayas and Mindanao too. I suggest you get the Roast Chicken and Lasagna which is such a hit with regulars at Cafe Claus. They have mean cakes and pastries too that's not too sweet because they do use sugar free options too (perfect for diabetics like me). For those who would want to visit, just go to Greenhills Promenade and find them at the center right at the side of the escalator from the cinemas. Thank you to the super nice people at Cafe Claus Greenhills Promonade, I'll be back there real soon!