Lovi Poe and Solenn Heussaff's "Fantasie" at the Music Museum 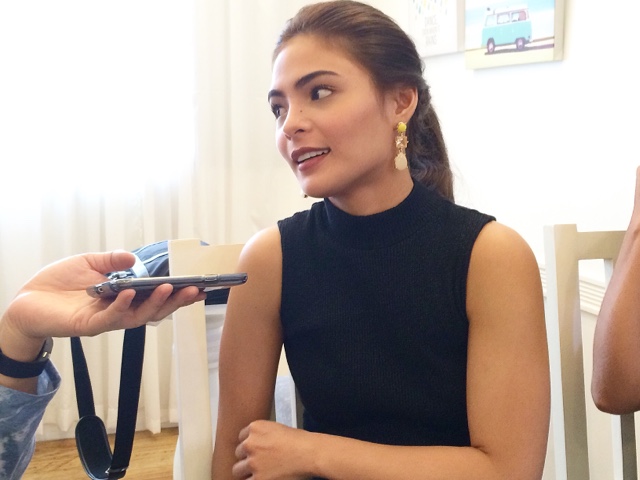 I love Lovie Poe, I like Solenn, they're pretty much some of the nicest people I've ever met even off cam. They're doing a show together this Saturday at the Music Museum. They dubbed it as Fantasie, a French boudoir inspired show that will take you into their most intimate moments. If you wanna get to know them better real soon, this might be a good time to catch them on stage in Greenhills San Juan.

People were talking about Lovi's past relationship with Rocco that afternoon but I was a little uncomfortable asking them about it. I've known them for quite some time and it was a subject I know that could really be touchy. When asked about her being in love, she said "I'm always in love. It doesn't have to be with somebody, or anyone but I'm totally happy. Rocco and I have a great working relationship and even though we haven't finished the film Lakambini yet, we're going to go back to work when our schedules match. It's pretty difficult to actually portray because the Tagalog is so deep. Most of my scenes are also in monologue so I sometimes cry because it's hard to do when you're reading the script an hour before the shoot."

When asked about her Presidentiable sister Grace Poe, Lovi says "I'm also here for her if she needs me. Sad to see people taking advantage of her situation. I'll pray for her and I don't think God and Dad isn't gonna forget her."

We were also wondering why Solenn wasn't in the luncheon, she said "Unfortunately Solenn is sick, she's under no condition to talk or sing but I'm sure she's gonna be alright. We're going to do about 7 songs each, and a couple of numbers with us two. It's like a French Boudoir, so it's like giving you a look at our personal space, the bedroom. Expect it to be sexy, sultry, but it's going to be done with songs. A bit difficult since Solenn is under the weather but we ran through rehearsals and hopefully she's going to be fine on that day!" Guests include JC De Vera, tickets can be bought at the venue or SMtickets.com. It's on February 6 so don't forget to see the show!

Here's the rest of the interview on video:

I wish you all the best Love! Love you Lovi!