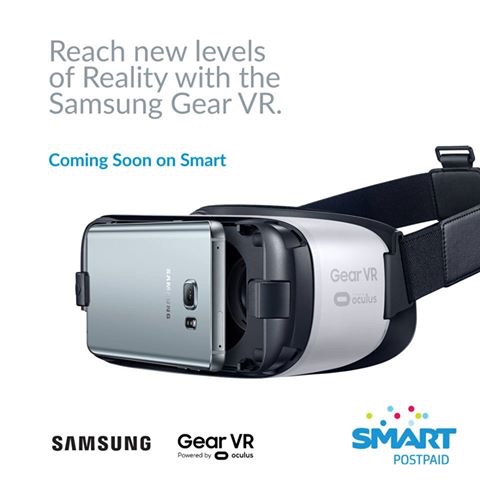 Good news after another, Smart Communications the country's BIGGEST network is making waves again in Entertainment as they offer one of the most prized gadgets in the world the Samsung Gear VR. We've seen it work in viral videos, perform never before seen concept in games and walkthroughs, plus mind blowing alter-reality that only the Samsung Gear VR can do. Wouldn't you wanna have this super coo gadget right in the comforts of your own home? Me too.

This is dubbed as the best VR device in the world and just by slipping the latest Samsung smartphones in front of the device, you would be transported into 3D CGI worlds touted unbelievably real even by geek standards. The Samsung Gear VR comes in pre loaded with trailers and videos, plus tons of content you can download off the Oculus store/Netflix. There are tons of game titles available too and still a lot to be developed on the way so you're sure to have more fun with this gadget once it becomes available in Smart stores soon.

For subscribers who are interested to get the Samsung Gear VR, visit http://smart.com.ph/Postpaid/samsung-gear-vr and show your intentions. I want one!

http://gmanetwork.com/artistcenter
Posted by John Bueno at 11:07 AM