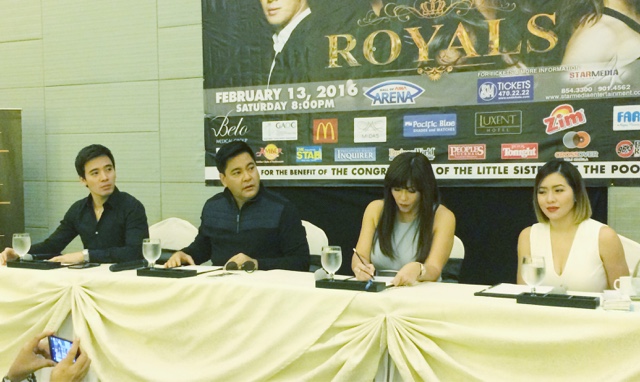 It's the second year since Mang Jerry left us, so during The Royals press conference Martin dedicated this day for him and Regine's family. Aside from that, they also announced that tickets to the show have been sold out, now that's good news for the production. 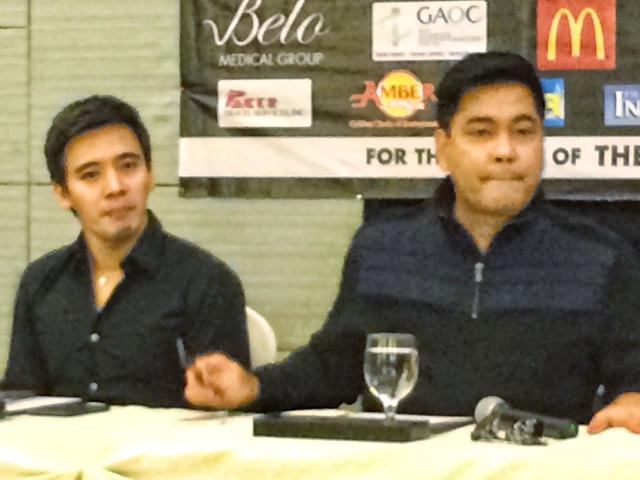 Erik Santos says "I am more than excited because I've seen the lineup. I'm also trying not to drink coffee as I'm a bit acidic, it's hard to maintain my voice if that happens. I don't know, I will be forever a fan of Martin. In the past, I used to watch their concerts and buy their albums. I get them as special guests in the past and now we're in one stage so it's overwhelming and as much as possible I need to keep up with them in live performances." Erik also commented on Ruffa Mae's "I am more than willing to sing in their wedding, we're still friends and I can tell her. I just knew of it two days ago, I had to ask her cousin about it and her cousin confirmed that they are engaged. Honestly, I am very happy for her knowing that. She deserves that. I am also ready to have one, I might even have a ring already (he jokes). Too early to say." 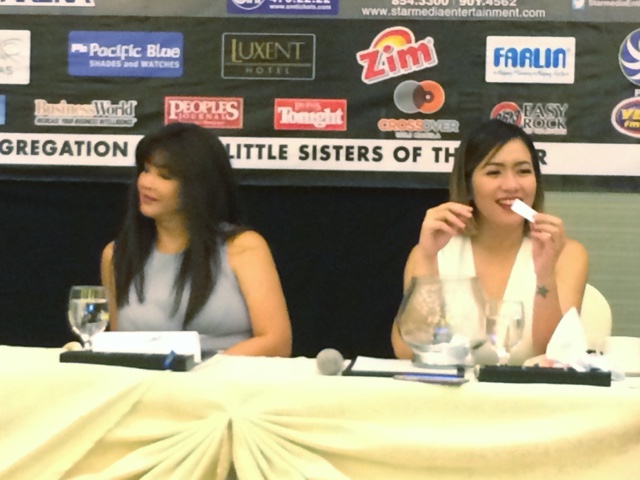 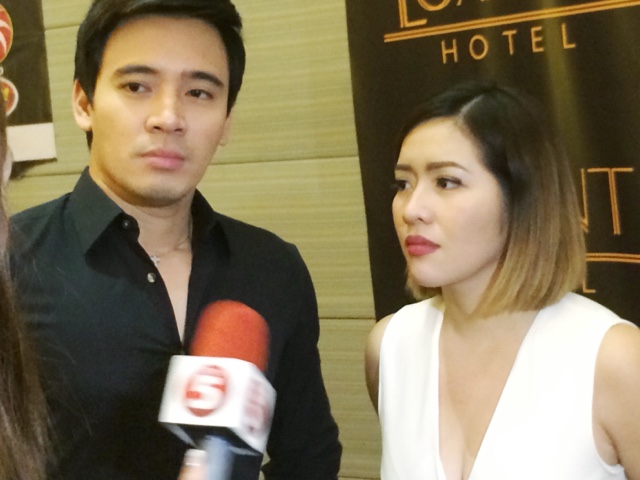 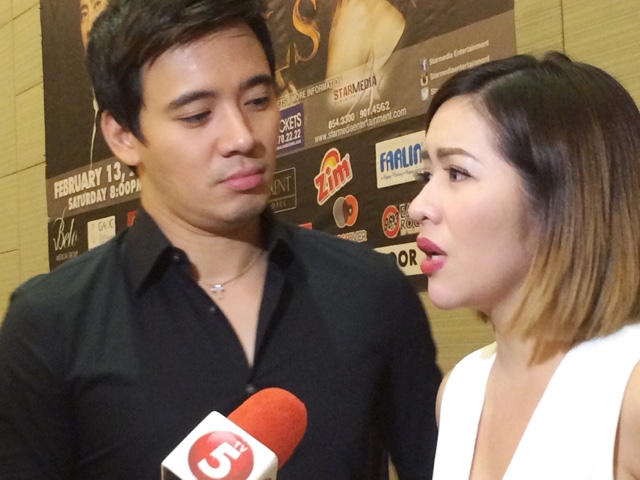 Angeline Quinto says "This is the first time that I have had a show where I am excited to sing for people and my family. To see Erik, Ms. Regine and Martin in one show is already enough, to be with them is a dream. I am trying my best to be at par with them, but I'll try my best" then she laughs it off. She added "I haven't really watched concerts in the past because I couldn't afford the tickets, but now I'm performing on stage with them. I'm really excited! I am looking forward for this dream, Ms. Regine is my idol and when people watch this, I want them to feel inspired because I have achieved something like this. I feel so happy to be able to do that. I can't believe this is happening. I really don't want to hear that I have to beat Regine in this concert, because I am just thankful for this. I also am relieved that she's not like other singers that don't want me in production numbers, I know of one guy but I won't name him. I have not mistaken to have idolized Sir Martin and Ms Regine."

"I also met Ruffa Mae, even had a picture and I believe she was sincere. But we haven't met again after that, I feel that she's very sincere, a very good person. We thought we were relatives but when I asked about where they came from, we were from different provinces." 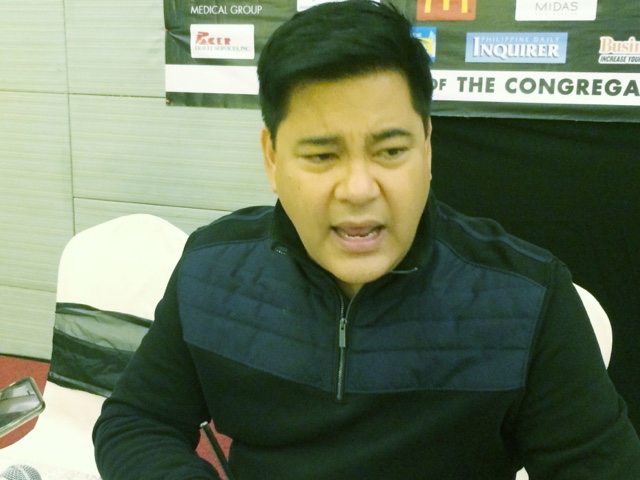 Birthday boy Martin Nievera says "These two have a big big future together, even if they are not a love team they'll watch them because of sheer talent. That's pressure for us, we have a different goal, for these guys to be satisfied and we'll try to do our best too during rehearsals. We had to turn down songs because we have different ideas. We might need to do a 4 hour concert and Cacai doesn't want that. Regine was very quiet before and if she goes on stage, it's like someone else possessed her. I don't know if the young ones will sabotage us, you should watch that in the show. I'm on my 34th year in the business, I don't know whatever made me the concert king, but it's a benchmark and milestone, it's a compliment but it's a reminder to keep up the game in these concerts. I'm so blessed to still have projects, it's the people around me not just myself, to be in their midst, I claim every blessing and I try very hard not to take it very seriously.

I'm happy so far that I have a song to sing, I am thankful. It's not just singing, these things catch up to you also but you won't have that same glitter, same position when you first started, it's a reality. I have been very vocal about getting better in the business and we should be telling our space in television so we could grow. I can do shows, talk shows, but it's getting to that point, when I get that offer, it's so much more fulfilling now the little that I get and few lines I get to sing in ASAP, it shouldn't be the case when you're a concert king, it's tough to be in the middle, there are no real friends in the business and don't complain. At the end of the day you should be more positive and that's very hard as you get older in the business. I want to be seen as the one who is doing his job, I'll sing in karaoke if I don't have a show because that's what I love. I'll be in the I LOVE OPM starting Saturday after MMK where foreigners will be singing Filipino songs and I hope you support that. Erik can easily beat me, even his speaking voice, he can sing in circles, he can emote and bring the message across, he's swooning and we talked about it. He's now making his whispers louder, I want him to shine too."

Regine quipped "Martin and I am excited, always because I'm going to be on stage and singing for my audience again. While we're doing this, in 30 years of doing this, it's always hard and there's always pressure because this is exhausting. But knowing that they are all here, I'm confident because we have the whole team here. I can point fingers if we don't do that well. I don't like performing alone even in solo concerts. I am extremely excited about this concert. The new show I'm doing is a comedy soap, there will always be drama there and I'm going to be a rich senorita that will become poor, that's the premise. Maybe if there are offers, I'd like it to be OPM musicals, if there would be something that fit me I'd wait for that project. I'm not that comfortable in Broadway style, I'm more comfortable in Filipino musicals so one of these days I'd try to see if there are good stories and songs that we can do soon. This is purely pop and classic love songs in ROYALS, they  would be appreciated by a lot of people and we'll also be bringing this to Cebu. Younger singers are very good, and more. I can feel that they're a little shy, but on Saturday I think they can do well. That might be a surprise. (They're talking about Angeline and Erik) I used to feel that way before.

These two will be giving their best! You know it's more real for me nowadays because it makes it more difficult to sing, like Erik, I have acid reflux. Sometimes it's not stretchable than compared to when I was younger. That's one of the things I tell them, just keep singing even if you can't imagine you can do. It gets harder, to be more energetic and realistic, if I can be able to do this, but I hope I do. It's not the same anymore, unlike before when I just open my mouth I can do it. I need to watch my food, sleep on time, it's not like that anymore but I'm happy I'm still here. Just a little effort and I can do it. We'll have a duet, Angeline and I, a very simple number with Whitney Houston. Lounging with coffee and all. I like that she has that attitude that she's not "nananapaw" because she respects people who she sings with. I like that, but I hope she brings it on the show, people would expect that because we both need to shine. We also have one with Erik and Martin, a Yoyoy Villame medley (she jokes), hopefully Ogie could watch this."

This is going to be a great Saturday. Watch ROYALS if you have tickets already!