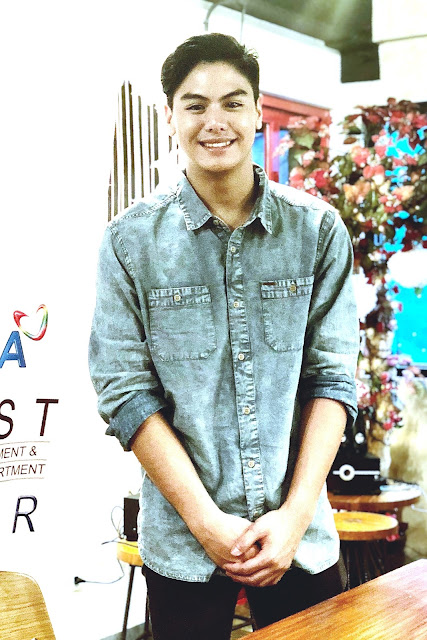 Promising as promising could be, Migo Adecer is slowly creeping the star ladder. After winning Starstruck last 2015, he's been in a rollercoaster ride appearing in GMA's brightest shows, tons of TV and provincial guestings, plus another feather to his hat which we just heard today. The boy has charm, good looks, but have always regarded singiimg quite close to his heart. He's no stranger perfoming covers in appearances and I've personally seen him do pop songs, rnb, dance hits and enjoy it with his fans, I could tell how he wants it to happen. GMA Records recommended a song and he liked it a lot, and he wanted to make it a bit more personal so he's touched this a bit, done in Filipino, and that's where his new song "Suntok Sa Buwan" started... and we liked what we're hearing.

Migo says "I am taking my job seriously than when I first started, it’s a bit hard to actually learn Filipino and acting so I’m taking it as is because I have assignments while I’m working. I’m finally become one with my roots, when it was pitched to me I heard it and first thought it wouldn’t suit me. I was told I could add my personality, it was amazing when I first heard it after recording it. I pictured it singing like Ms. Kuh Ledesma, I wouldn’t want this to be half baked music and I’ll give it my best. Hearing people say it’s good and how it was a magical moment to do the rap part was actually good. I had 12-16 lessons in Australia, singing in my bedroom too and I always rapped, but professionally this is beta. I hope I’ll be able to do mid this year it would be a little more dark, I like my music that way. I’m 18 and I understand it a little more, maybe I can express who I am more. My management is well handling things and I am ready to take challenges thrown to me, I respect them and I’ll be doing, I have been with keeping it down low with my relationships too."

Here'a a bit of our conversation, and a sample of his singing. Enjoy!

If you want to hear it, it's now available on digital stores and streaming sites worldwide. This is under GMA Records. Make sure you say your piece on social media and tag him, he'll appreciate that!