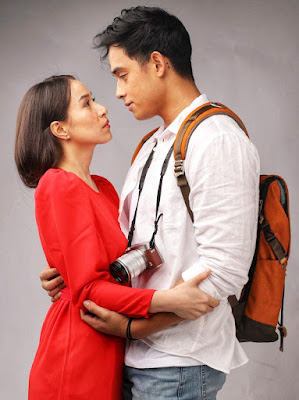 Undeniably one of the most watched KDrama in television and cable history and one of the most revered shows where Park Bo Gum stars is this one called "Encounter" which he stars with Song Hye Kyo. Well, it's going to be shown on TV5, Sari Sari Channel and on the Cignal Play App. Thing is, this is the Filipino adaptation and from the looks of it, it's going to have its own flavor as the ones reprising the role of Selene and Gino is Cristine Reyes and Diego Loyzaga.

For those who watched the Korean flick, they did some scenes in Cuba right? This time, since the constraints of the pandemic happened, they got scenic sunsets done in Ilocos Norte and Subic which made this even more interesting. The love story between a divorcee hotelier and a person who later they find out worked for her is going to get your frustrations worked up as they solve their relationship and her former husband's family. She's very successful, upon making a dying business evolve into an empire. It was so nice to see how Cristine and Diego portray their complicated characters as they are going to put their personal and Filipino flavor. This afternoon, we got to ask questions about the show and here's some of it on video:

Aside from Cristine and Diego, they will be flanked by a colorful ensemble cast which includes Kean Cipriano, Robert Seña, Maricel Morales, Yayo Aguila, Louise delos Reyes, Gardo Versoza, Isay Alvarez and more. ENCOUNTER will be shown every Saturday at 8PM and the catch up episodes will be the next day on Sari Sari channel. You can also download the Cignal Play App if you're elsewhere in the country and prefer to watch it streaming instead.

This is also Diego Loyzaga's comeback after a long hiatus in show business. You might want to watch his star shine more.