Loved the Vitasoy Plus Milky 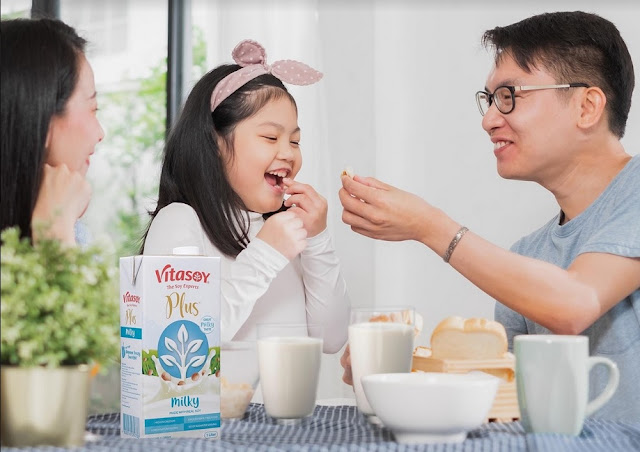 I've been addicted to Soy Milk which I often get from stores or the regular Taho man who frequent my neighborhood as he carries around several bottles together with the soy curds. Vita Soy has been very familiar to me especially the bottled ones which are available in supermarkets, those fridges just look so nice with them so I had to make sure I take them home for snacks and stuff. I don't usually think about the health benefits, but apparently there is. It's a good source of potassium and several vitamins and minerals. It's also as nutritious as cow's milk but it has lesser calories, so it's somehow a more nutritious version of it.

I tried the Vitasoy Plus Milky which is a new a product of Vitasoy-Universal Robina Corporation (VURC). It has a much cleaner, creamier consistency and flavor which I liken to milk as it is more neutral. I mixed it up with coffee and it didn't affect the flavor, in a sense, it actually enhanced it as it made it appear with some nutty notes, a thing I actually like to happen.

This actually is good for me since I don't have to add sugar, it has 2.4% per service so it's enough as it is for a drink. I even drink it up as is with ice and blitzed veggies so I have my daily allowance of vitamins and minerals, which you can do also for kids. It also contains very little saturated fat but more calcium, and overall, a pretty good alternative to usual cow's milk. It's pretty good for vegans and I've seen my friends enjoy this while watching movies rather than soda.


It's also best for anyone who's lactose intolerant, as it has none of that whatsoever. It's why I actually loved it, and along with that, a really nice alternative to overly sweet stuff I usually have during small snacks. Best of all, it's quite cheap at Php 85 which you can buy in leading groceries, Shopee and Lazada. If you want to know more about it, see http://www.vitasoy.com/ or VitasoyPH on FB today!