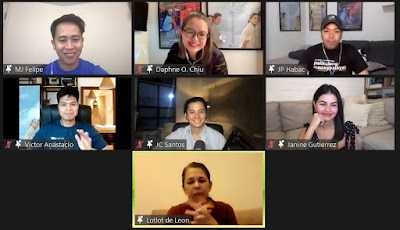 Just got off the thanksgiving virtual party of the film Dito at Doon starring Janine Gutierrez and JC Santos under TBA Studios. In it we got to talk to the cast and the people behind the film, seeing them reap the fruits of their labor, they've really had tons of support from their fans and industry friends. During the last presscon, we were with Ricky Lo asking questions, sad that he's gone. The event started with a pause to commemorate the journalist who also supported the film.

Direk JP Habac says "My only birthday wish is that more people would be able to watch the film. The experience in the cinemas is really different, if this would be shown there, there would be a bigger chance to be seen by people, you get to see how they react, interact with other movie watchers, hopefully we can do that."

Yesh Burce says "Thank you to everyone who watched Dito at Doon, to everyone in the press who have shared their thoughts about the film. I'm sure there will be a lot of people that will watch the movie after this event."

Lotlot De Leon says "Janine already knows what she's doing, she has planned her life, I'm happy with that. She's old enough to make decisions on her own and she is doing it at the right time. I'm proud to see my daughter grow into this business, there will be more projects with TBA and I'll be looking forward to that."

Victor Anastacio "I'd like to thank TBA Studios and the streaming sites we got worldwide, we also thank the press for all your help. This film has hope and it is relatable, we didn't imagine that this will happen to all of us. This is how we experienced things and we showed hope amidst the circumstances. I think I appreciated it more because it's not just a traditional romcom, it's like the pandemic is another character, which makes sense. You can't plan everything, you have to be open, and make the most out of it."

JC Santos says "I am truly grateful for TBA who took care of us, I am happy to have been part of something that was created during the pandemic. We are happy to see those who have seen the movie and gotten lots of positive feedback about the film. I've found home with TBA. My favorite scene was the harana scene, they're taking it to the next level there and it's like offering a piece of your soul. It's one of the things I wanted to see again. This film is important, in this time and age, hope is all we have as we all are in survival mode. I mean it's a different feeling inside the cinema, I still want to see my armpits that huge on screen. I think it's a different thing that people feel when you see that, you have no choice but see it as a spectator, I miss that feeling. I think it will be different when you see it there. I enjoy my work as an actor, I went from my community to UP and doing acting jobs on screen. It's a good feeling not to have sleep, that's when I get challenged more, this is so much fun. The people are great, and I enjoy the whole process. When I accept projects my first question is... have I already done this role? because that's where it starts. I have had to decline a few projects because I was advised by my Manager, and because of circumstances that are beyond my control, and it's different in festivals. This one is different, it's kinda like a disaster movie. When I probably have a hand to finish this, perhaps I'd like to see my character be happy and be home with his family, not to spoil it, but I'd like to see him happy there."

Janine says "I hope to really make another film with TBA and I've always seen several of their movies. To be able to do this and in this story, I felt all the support of the press and I can't thank you enough. You really did stand along with us during our promotion. I have many favorite scenes, but I love how it ended. I was shocked to see that part because how it was edited. It's different. The film projects hope, TBA took risks and chances to produce a film despite the situation, and as seen on the film's performance, we're hopeful it is viable to have movies be watched even at home. It's different in movie houses, and a different experience to watch at home, but yes I hope to achieve what JC Santos get to have when its shown on cinemas. Rejection in the industry is so hard to still accept, I still audition, I have a certain sense that they have control over your future, but I chose to stay because I know I needed to stick it out, to do my best, do the things that make me closer to my dream and I'll get there. Accepting roles also depends on the script, to the people I'm working with. In this film, I just said YES PLEASE when I heard JC Santos and JP Habac. I'm happy a lot of people are appreciating it. If I'd be choosing where my character ends, I think it would be good if she just doesn't close doors or the possibility of welcoming another person, another love. I'd be happy already if she does that."

Now if you haven't watched DITO AT DOON yet, it's something that'll make you wonder about OUR current situation and the relationships we build and keep. Stream it on Upstream, Cinema 76, Ticket2Me, KTX.PH and globally via TBAPLAY on the Google Play store. Go install it and see why people are asking for part 2!