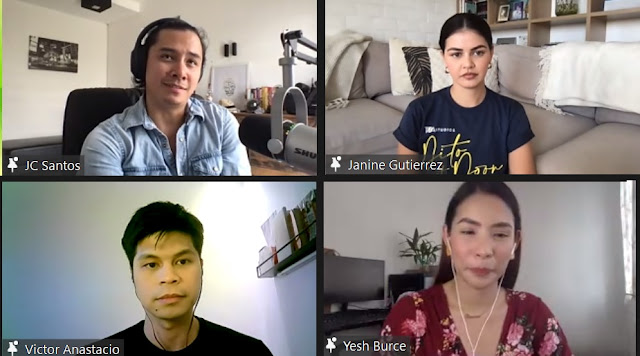 Theaters are opening and TBA Studios is going to have March memorable with a new movie called DITO at DOON directed by JP Habac. It's a movie about a chance romance between Len and Caloy played by the two artists, of which one is a Political Science grad while the other is a delivery guy. They met online and didn't quite end in good speaking terms.

Produer Mr. Vincent Nebrida says "We're very proud of this film shot during the pandemic. It feels good to watch and it's positive about the situation despite of these things."

Janine says "We've all been written as artists about things that are not even true. I've learned not to be judgemental because we don't know them which is part of what's spoken about in this film."

JC says "This is my first time working with her as lead actors, but we have worked in a project where Janine has guested. This is the first time we had a chance to talk, to get to know each other as a person. I really look at her as a person, I don't really do much on social media so I don't read much of what is said about me."

Here's part of our interview on video:

The cast includes Victor Anastacio, Yesh Burce and Janine's mom Ms. Lotlot de Leon. Dito at Doon will be shown on theaters nationwide. This is under WASD Films and TBA Studios. This is an interesting love story, will they end up together or be different people?