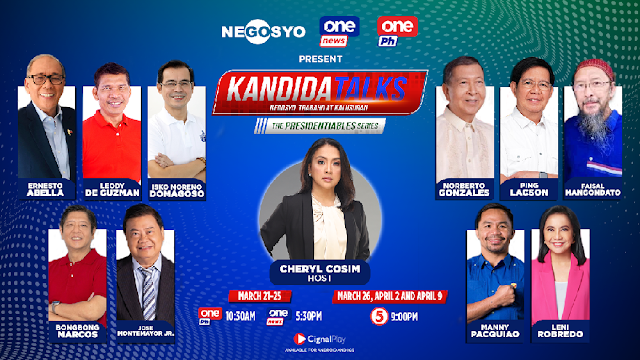 Election coverage has started and the folks at TV5 and Cignal are no stranger to that. Together with a formidable roster of broadcasters, they have launched Bilang Pilipino 2022 in their different mediums Radyo5, 92.3 News FM, highly popular Interaksyon, The Philippine Star and BusinessWorld among others.

For starters, is the Presidential series called "Kandidatalks" which they've done with Go Negosyo (an NGO) wherein they'll talk about Business, Work and Health. It will be moderated by Cheryl Cosim. The series will run from March 21 to 25. It will be replayed from March 26, April 2 and 9 on TV5 at 9PM. If you prefer wathching it earlier, it's going to be seen on One PH Channel 1 at 10:30AM and One Nwews Channel 8/250 for HD at 5:30PM. Go see your presidential candidates on these dates taking on current issues so you get to have an informed vote on May 9th. 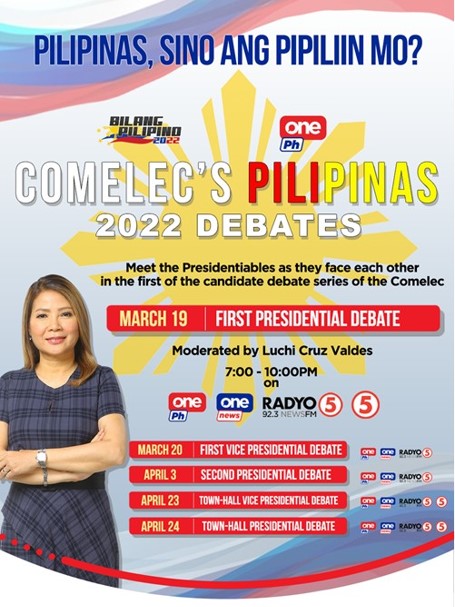 They also have a 3 part documentary entitled The Promise Tracker which will be hosted by Cheche Lazaro. It will air on March 26 on One News at 7:30PM and TV5 at 8:30PM. Mon Isberto on the other hand will host Optics: Politics of Perception which will air on One News on March 27 at 6PM. It's going to make you understand how PR works in the elections.

You will also see Hitting the Campaign Trail on April 13th. which is a reality documentary series about how it feels to be on the campaign trail. This will be from reporters who are all with the candidates and will be shown on their channels. They will also have them uploaded on Facebook, YouTube just like their other programs in the channel.