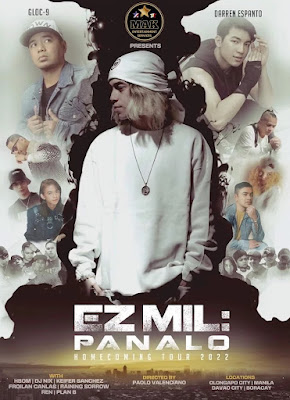 After his viral video PANALO became a phenomenal hit in the Philippines and elsewhere in the world, EZ MIL will be coming home to the Philippines. This is a welcome treat for those who would love to see him in the flesh, perform live on stage for the first time.

Raining Sorrow is EZ Mil's sister, she will also be performing with them during the tour and she says "As his sister, it's cool that he's doing what he loves." HBOM says "I'm super excited to see these people, it's been a while since I've been back in the country. I'm in awe everytime EZ MIL works, coming home after 20 years of not going back is really exciting. My new single is also out, it's called "Lahi" and hope you get to watch the music video."

Darren Espanto says "It's so nice to be here today, I'm very excited to perform on stage after 2 years. It's something that is inevitable, find ways to improve your craft, something that I'm still doing now, I want to continue to showcase a new Darren, a more mature side of me."

GLOC-9 says "Thanks for having me, EZ this is so exciting. I'm very excited thinking of being here in an event with him, he knows his craft, I'm excited for him and happy seeing him do what he loves. I'm excited because just to see artists evolve how we create music, I'm thankful for that!"

EZ says "I'm just super excited, this is something incredibly huge for everyone, for OG's, for those who are just going on stage, by what Gloc and the greats said, maraming salamat for making this possible for all of us. I just hope we get to have a lot of fun. I can't wait to be there. The feeling of doing it on the Wish Bus, I didn't know how people would receive it, there were just people that I met and I did my thing. It was just a moment that captured me in time, it's a little thing with mic in front, a spectacle that I'm wondering why it is still gaining views today."

He adds "I'm not nervous, the effect of PANALO is something that is probably already been loved by the crowd, it's just going to be a different vibe. It's just going to feel like home. There will be some songs that will collaborated, it will be a surprise so you just have to see it on the day itself. As a performer, I am just myself, I'm gonna try to do my shiz and at the end of the day, live is live. I'll perform my songs, I have respect for songs, whether I perform it or not it'll be good. Stay as strong as you can, we're going through a crisis, but whether it affects you or not, pakatatag lang. My Dad's music was different, it surrounded me a lot, my regular life, it wasn't something that stick out for me and rap is something that caught my attention, in highschool I got to listen to more, in college I started looking for deep lyrics, the reality of metal which I did had words that was extreme. I just be myself, I can't do anything than just be me. I just deal with people the same way they do to me. Music or what you see on screen is work, Imma keep working. Let's just have fun doing what we love to do. Gloc has been an inspiration, in highschool, those were just the times. He's always got a special place in my heart. He makes music that you understand, it's good times!"

About other artists "SB19, BGYO, BINI, they'd be killin it now. I know they will be doing great on the world stage for sure! We should keep the momentum going, strike while the iron is hot, it's easy to get to the top, but keep the foot on the mold as we're going to be seen by an even larger audience including media."

Gloc says "I think when he gets here we can probably do something, as advice, just love what you do... treat your dream like an actual person. When I don't do well, I talk with it, like a relationship, to love your craft and it will love you back. If you do that, and see what you carry is different, you will see things happen."