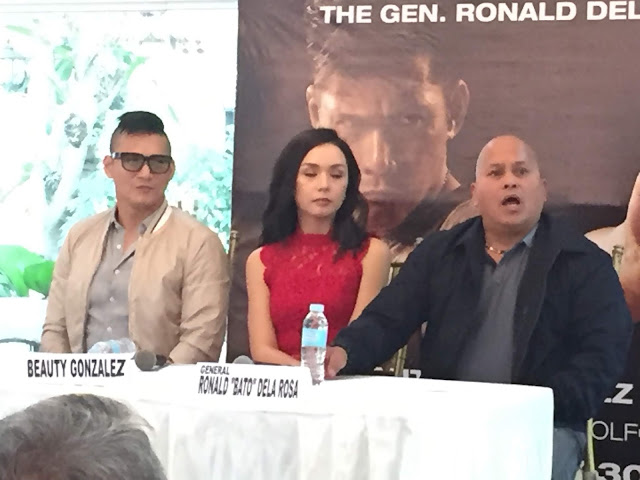 Robin Padilla says “I have portrayed other police personnel but not as much of a hero like General. I am a tougher, bigger police, action films now have different executions. In the past we only had 3 months to make a film, but now pre prod takes that same amount of time. We now have Hollywood level things in the Philippines and it’s a different message in this story, people who worked hard, followed the law to get where they are. He is also a family man. There are a lot of things I had to learn, as General is a sharpshooter. Holding it the right way, trained, different from criminals and you would see that on screen. It is very difficult not to give in to scenes, as General is a loving husband. This role came to me in a long way, it went to Senator Manny Pacquiao, I got invited to a basketball event and I asked him to do the General Bato story, we went to Viva, Star Cinema, months passed and it didn’t bear fruit. I was kidnapped by ALV and brought to Shangrila, I was surprised because they fixed things but I had to finish BOL duties first, then we got to talk personally about it, with General there, we got to rap up, finish things, shoot and now we are here.” 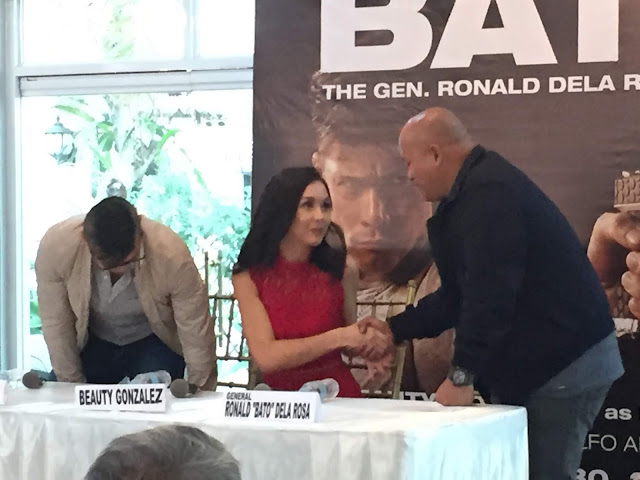 Beauty Gonzales says “I just got notes from my director and I find their love story very cute, lahi ug under kag masunurin. Though I haven’t met the real wife, I could tell how they’re very grounded as a couple.”

General Bato Dela Rosa says “I couldn’t believe Robin was going to play me in the film, it was unexpected, but they helped, this is a dream for him to portray me. It was from bad boy to this god fearing man and leader, he to me is a good example for the youth and he is my idol. One thing I could tell was a hurdle was going about firing people in my own turf, the PNP. People will know what I’ve been through as a person, I wish to revive or to regenerate hope, love, faith in all the hearts of people so they too would have hope in life. Robin is one of the greatest actors in the Philippines, he read the story line and talked to me and I didn’t know he was already researching. When I saw the trailer I found my self in him. If he’s in the police force he would be good in intelligence because he knows how to research, I didn’t give any extra. I have done a lot of hard things, spent times to sometimes kill in hostage situations and I have to do it. You wouldn’t be able to shake it off your mind sometimes where I think PTSD is needed sometimes. Those are lives too and if you think too much of it you’ll go crazy, you just have to ask God for help just to help more i innocent people. Davao is different from Manila, in Davao you feel the support of the local government, in Manila it’s a bit of a mix, even the media, there is some sense of ownership in law and order so it is a better situation there. I have served almost 36 years there, I hope it doesn’t show. When I graduated in PMA, graduated on top of class, I was like Tarzan, I could lift heavy things, I could swim for hours, it’s why they called me Bato. I was also born in Bato Sta Cruz and it just carried on. Just in case I win I would like to be part of committees that have to do with law and order. I want to have tougher laws on drug traffickers, death penalty, hope I could do that in order to save people. General Lacson was my boss back then, I will consult with him too. I am a General and I admit there are a lot of women who approach me but my wife always catches it, it is difficult to fight a tougher wife trust me so I always refer them to my wife if they send text messages.”

This is rated PG according to MTRCB. This movie will show January 30, 2019.