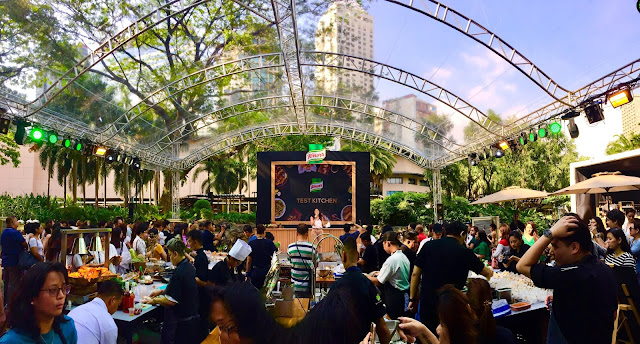 Spent the afternoon at the Greenbelt 3 Garden earlier. Even if it was hot, the place was packed with foodies from around Metro Manila. They also invited celebrities and Chefs, I was impressed by the things they had in the spread. They got 4 stations manned by Manila’s best chefs. I was so excited about what they could cook in just a few hours.


Benjie Yap of Unilever Philippines says “All our brands serve a purpose to serve the Filipino society. Over the last 15 years we partnered with NGO’s and Government Agencies. Knorr has helped 1.5 Million kids to get off malnutrition. This will redefine cooking of Filipinos all around the world.”


In the event they had Chefs Happy Ongpauco Tiu, Josh Boutwood, Mico Santos and Kalel Chan. They prepared limited edition recipes at the Knorr Test Kitchen. Most of the stuff they dished out were actually good especially the Garlic Fried Chicken, the Sisig Gyoza and Bangus Sisig.

Aside from cubes, soups, powders, seasonings, they now have the brand new Knorr Savor Rich Pork Liquid Seasoning and Knorr Savor Rich Chicken Liquid Seasoning. Across 90 countries around the world, they use a Knorr product and in the Philippines since 1973 Knorr has been part of the Filipino kitchen. They are now going to other dishes, concentrating on the fried and grilled segment so this is perfect for that. This means you get to coat every single ingredient in your dishes, it also infuses the food with the meaty umami taste. Media and celebrity guests got a taste of these dishes and later on at around 6, they opened the event to the public. It was like a free for all thing, they never even had to use salt or soy sauce to season them all, they just used the new Knorr Savor Rich Chicken Liquid Seasoning.

I’m sure the other guys and gals attending the 6pm event open to the public would enjoy it as much as we did. I hope they get to taste my favorites too!