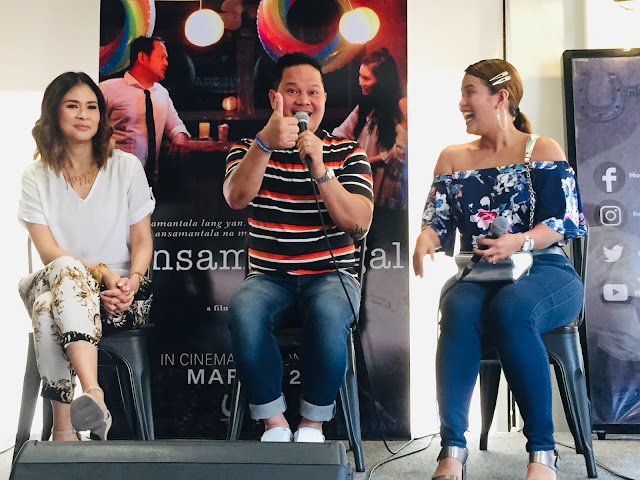 Pansamantagal by Joven Tan holds a lot of promise. They’re not your usual eye candy pair but if you’re combining Gelli De Belen and Bayani Agbayani in a romcom, you’ll definitely get a lot of laughs without even doing complicated things relationship wise. This is produced by Horse Shoe Studios and will be in theaters come March 20. What do they have to offer you say? We asked them during the presscon this afternoon.

Gelli says “ The landscape of promoting things is just so different. In a span of two days our trailer got 3-4 Million views and I hope it translates into the same amount of people who will watch it. It was a friday, it was supposed to be a short trailer for us to view. In this day and age, I thought it was going to be hard, my advise is to get the perfect one, try to make it work, but if you have the signs it won’t work, don’t force it. Move on to the next one. The last movie I made was Sikreto ng Piso, there is no recovery from the talk you do in this project. It is something I have never done and I found it different because it is real. I have a lot of inappropriate words, 14 to be exact, and being with Bayani now is just the same as before. It is less inhibited, he doesn’t care how it looks, but he just is conscious about making it better. We are both more open in exploring our roles. The film industry isn’t dying, we are getting better than 5 years ago. I don’t think it will be bigger than before, because we have a lot of medium, you have to pay for it on streaming sites, but there are still people there who would gladly spend for it and watch. Here I didn’t have to think of things, it is feel good, I just had to do it.“ 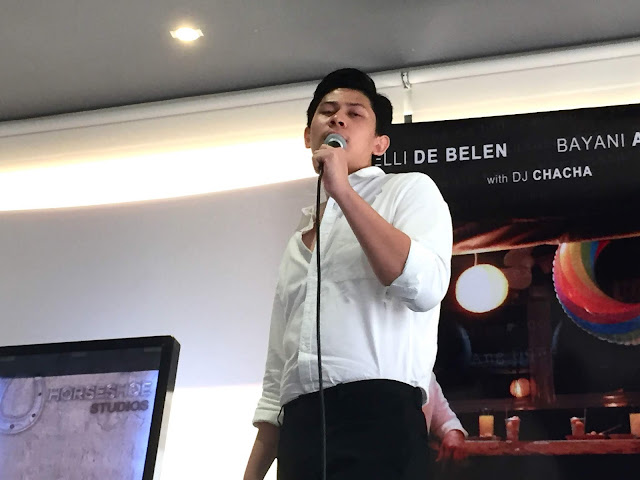 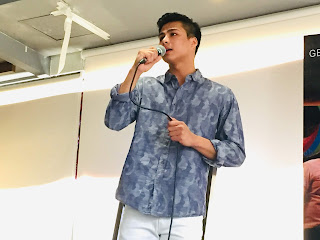 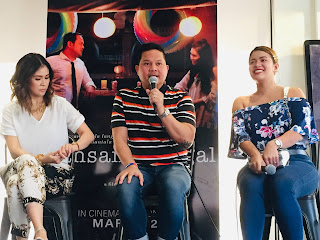 Bayani adds “I was so happy Chacha is part of this because I felt she was doing it in sync with Ms Perla Bautista, she was that good. This project won’t be seen by kids, it needs a funny mature audience. When we were sent a copy of the trailer, I posted it with friends on Facebook and I didn’t know it wasn’t supposed to be posted yet, I couldn’t take it back because it already went viral and marketing was so mad that I did that, it wasn’t color graded yet, the sound wasn’t done yet but it was already there. In relationships, I usually enjoy the moment, it happens in real life. If you want lessons, go to school, but the time you will lose is something you would regret, so don’t make it a big deal. I am a fan of movies, this one has spunk, this is different and should be something I could proudly say you have never seen something like this. It is the first time you’ll see a movie of this kind. I have a lot of patience, we have worked before in gag shows but being paired in a dramedy of sorts is fun, we are very comfortable and help each other so we throw lines and have lots of materials. When I asked Chacha, I just told her to be more natural. I did miss being the lead actor, I pray for it but I do not force things. I had to hug my director a lot because this happened, I was overwhelmed and I had to do drama in it. We had paranormal activities. I did expect Gelli to be this way, you guys don’t know how she is in real life. The dialogue is risky and it is so different to do things like these in films. I haven’t been paid yet, maybe if Joven Tan earns they will pay me on Wednesday. There are tons of producers who want to make films, we have good directors and cinematographers, I go to festivals and support other ones, they are all good, it’s not dying. Maybe the less people watching in cinemas but it is improving. I was dreaming of working with Gelli and when I saw her, we felt easy because we have common friends. We had to work with Direk’s system, I get goosebumps doing what he wanted us to do. It was magic!“

Dj Chacha of MOR 101.9 also is part of this movie. She says “ I am so happy to be part of this, I was afraid at first because I have experienced people in the industry that has attitude, but these guys are so fun to be with. I only had two things I had to prioritize which is my DZMM stint in the morning and the evening MOR program that I had. Pansamantagal is like my story, I am getting married soon to a man that I thought was only temporary. When I first worked with them, I already have an idea how Bayani works but with Ms. Gelli, I was a bit shy. They both were very nice, so it was easy later on. I didn’t know how to cry on take, so I was expecting the director to scream at me. I wasn’t a DJ here, I am going to be invested in their characters and going to be a little too nosy. We just eat and talk about things, normal things, I was so impressed how Gelli and Bayani could switch acting on and off, roll around the sand but I couldn’t cry in seconds like they do, I hope I do get more projects, like something that would fit me and my schedules because it’s crazy.“

Two broken people find each other in the most weird hours of their lives, maybe, just maybe, this may spark their relationship. Their trailer already had millions of views, more so the interest in Eric Allen’s theme song for the movie and Johnvic De Guzman’s cover of another song. The trailer shows how fun this would be, you just have to take a look at it when it hits theaters on the 20th!

It is funny AF!