It looks like they had to resort to a show of force today and by the looks of it, they’re a couple thousand people strong. Riders from across Luzon, their leaders and even Angkas rode from EDSA People Power Monument to the Philippine Senate this morning to show their outrage against the Double Plate Law authored by Senator Richard Gordon and Vicente Sotto. This is the senate solution against the riding in tandem crime problem via RA11235. It mandates the Land Transportation Office to issue bigger reflectorized plates for two wheeled vehicles enough to be seen 12-15 meters away from the naked eye. Riders deem this anti poor, and pose a safety risk for the rider, the passenger and even other road users.


They also claim no consultation was made before or after the enactment of the law as it was signed by Duterte already last week. It makes sense because not all motorcycles are created the same way, not all models have places to put the front plates modifications done on bikes would pose more risk to accidents. Criminals simply could change plates, use fake ones to mislead authorities. 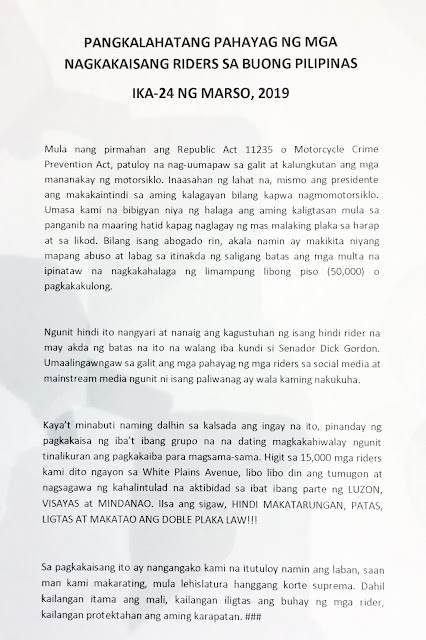 They are hoping for a resolution, they have valid arguments and we all hope this becomes a start of an amicable one, not just for Angkas riders but the whole motorcycle community.