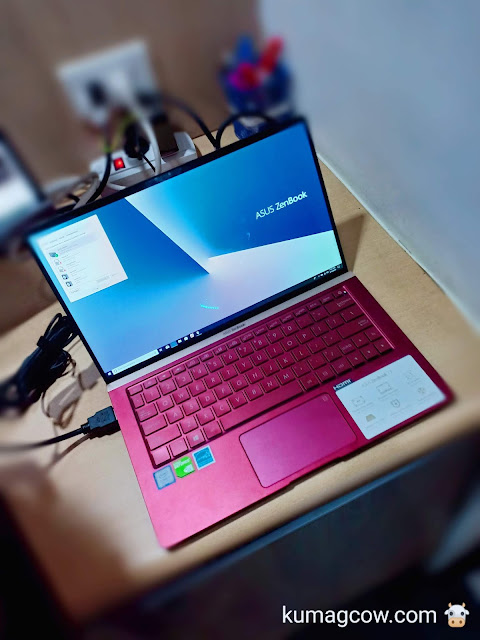 Cluttered space in the photo but so much to celebrate about the ASUS ZenBook 13 Burgundy Red.
You see, last Valentine's Day, ASUS Philippines held a campaign called #FallInLoveWithZenBook for all their social media followers. It wasn't a small one prize wise because what was at stake was a brand new spanking laptop computer of the mentioned model above. The gist is if you were to give this midrange priced marvel to someone special, who would it be and why would you give it to that person? What particular moment made it special?

Of course there were thousands who joined the campaign - but one that caught their eye was a guy who wanted this for his girlfriend. Pocholo met her in the workplace, it wasn't easy but he knew she was going to be worth it. He mustered enough courage to court her, became an item - and made her feel special. He did his best to make her do random things she didn't experience yet. He told her his story, that's why she too felt she had to make him feel special too. She was so surprised to receive this ASUS ZenBook 13 Burgundy Red unit. She always wished for her own laptop and when Pocholo saw the ad on Facebook he knew he needed to join. Jessielyn now plans to use this for her sidelines, to watch tons of movies, and even edit videos because she's always been doing that on her smartphone. Armed with a powerful but very elegant computer, their love story would definitely blossom.

Congratulations to you two! If you want to see the whole video, you may see it here at the ASUS Facebook Page.