This is a festival adopted from “Araw ng Pagbasa, Araw ng Pag-asa” in 2016, now they’ve grown bigger and have expanded to different partner cities like Cebu, CDO, QC, Naga, Baguio, Palawan and Dumaguete. This year, their mission is to feature short films with stories of ordinary Filipinos that aim to showcase perseverance amidst life’s adversities. The launch was witnessed by press, bloggers, Meg Seranilla (INP Third Prize Winner), Florence Rosini (INP Grand Winner) and our Vice President Maria Leonor Robredo. Last year was a very successful one. 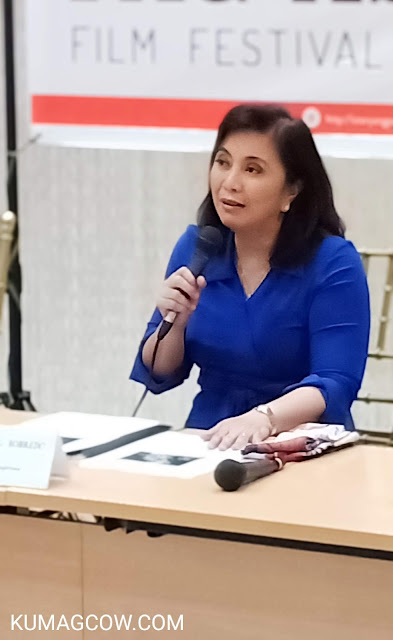 Vice President Leni Robredo says “Thank you for accepting our invitation, first, we are promoting our second run. This started in 2016 in Ayala Museum, I was one of those featured and I was touched by the stories of ordinary Filipinos which was featured there. One of them was Hidelyn Diaz, it was encouraging, then a lady turon vendor Nanay Lorna struggling to make ends meet and left the venue inspired about it. We want to do something about the negativity, I am a victim of that and I talked to the organizers in Ayala to do a roving photo gallery. They have stories that succeeded amidst adversities, every Filipino had that story, we collected a lot from different parts of the country. We had tons of partner universities and colleges. We had 73 entries, had to put a few screenings, some of which have won accolades for the country. You should watch the past entries and look forward for the new ones because it is a good avenue to understand the plight of different Filipinos. One of them is about Tourettes Syndrome, a story with Marlon Fuentes. It was a good feeling the last time, so we decided to do it again this year.”

You must submit your 3-5 minute film (one with subtitles, one without subtitles) in H.264 format, application form, resume with 2 2x2 photos, copy of government ID’s and letter of consent (if a minor) to the Office of the Vice President at 100 11th Street Barangay Mariana Quezon City 1112 on or before March 25, 2019. For full contest mechanics, visit istoryangpagasa.ovp.gov.ph. Make sure it is shot at 1920x1080 resolution or higher.

They will be also introducing their ambassador Dingdong Dantes and looking for entries that could win Best Director, Best Script, Best Cinematography. The Best Film will win 80K, 50K and 30K for 1st and 2nd Runner Up entries. They will also choose an entry for People’s Choice Award and a Special Award from Ayala Foundation.

Make sure you submit your entries on time, do your best and who knows, you might be discovered!