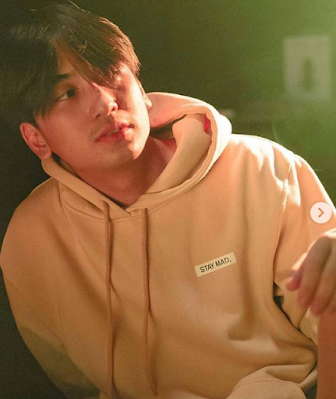 It was a little over a year ago when OC Records placed their bets on an artist ADIE GARCIA. He's a singer songwriter that's done remarkable work on pop covers which he did during the early months of the pandemic. Just a few months ago, he struck the mine with a heavy heartfelt single called "PARALUMAN" that had stellar reaction from critics and social media... and his story is about to get even more interesting.
Today, they just released his new song called TAHANAN whom he dedicates to people that have other people they call home. He's a little shy, but was excited to tell us about the story of his songs and how unknowingly, he got to where he is right now.

Adie says "This journey has been really surreal for me, the pandemic was tough, and I didn't expect this. When artists start, there's a process, but I had a really blessed path and experience, Paraluman was a game changer for me and it has changed my life. Doing the HRNA concert early in my career, it was just an honor to be there with Unique, Arthur and Rob. Being featured there was happiness, just to be in their midst, it wasn't just work, but friendships that formed, that's what matter to me in that project. Working with Ms Ivana was really cool, I didn't feel intimidated, she was so charming, she really made me feel like she was a friend right from the start, it's so early to work with big names like her and Ms. Bella. It really hits the heart. I really had dreams to be with Angelina, and finally being there with her was a dream. I really also appreciate about her feedback, and also her whole family. I really just dreamt about that song, she was flattered and happy too. We didn't know each other even before, but she knew she was the inspiration for that song. We talk now, and text, and I'm happy that happened.It's been a roller coaster ride with OC Records, it wasn't super all rainbows at the start, I had to introduce my sound, my music. When I released the single, it was okay, then I had another, I experimented, a different genre, and Tahanan is doing good now. It was a nice journey so far. All these things are unexpected, it wasn't in my mind to be in this situation especially because of the pandemic, I was supposed to go to school and do architecture, my plans didn't push through. Last year when I started, I just wanted to share my covers, this is all so new to me and my career, I am truly blessed.I'm not thinking this would surpass Paraluman, just getting good feedback from people who listen to it, I'm just not expecting so I don't get disappointed."


He adds "TAHANAN started when I watched Piolo and Alessandra's movie, that's where I got part of the lyrics that says "Dito Ka Lang, Dito Ka Lang", it was the perspective of Alessandra's character in that film. I listened to it and I found a song, I put it out there and the snippet went wild with people. They waited for this full version, I was a little hyped because of that and I tried to finish it sooner. The day after I did, and the inspiration for that was my family, the couples that already found their home, the ones that they feel they wouldn't leave their side. It was on the second day when I got to finish it. I had to finish it because the first verse and chorus was a little repetitive, when France finished the instrumental, it took a week to finish the draft. This mic was the same thing I used to record it, I got OC to release it this year even if it wasn't the season for sad songs. They believed me and did it, the process took a month and they got to mix and master the song, TAHANAN was born!"


Here's the interview we had with him today!

The joy of talking to someone hungry for artistry and the excitement of having him tell us about how the writing process of how these songs came about was certainly something I did look forward to. I liked how Adie was a little humble, us subtly uncovering that shell and seeing how the poetry in his songs were figured out straight from they guy. He's only 20, very single, anyone would've mistaken him for a TV star, but he's choosing to concentrate in music. When he released a sample of it on Twitter around October, who know it would blow up like this right? He deserves every second of fame he's getting now, and who knows, maybe accolades soon. Since he's just starting, maybe it's time you try and stream his songs, watch the YouTube videos over at OC Records about Adie's new single TAHANAN. You might just get to be inspired, be romantically surprised how this will match your story if you're in love.

You may eventually find your own home, a person meant for you. I just had to say that after listening to this song.