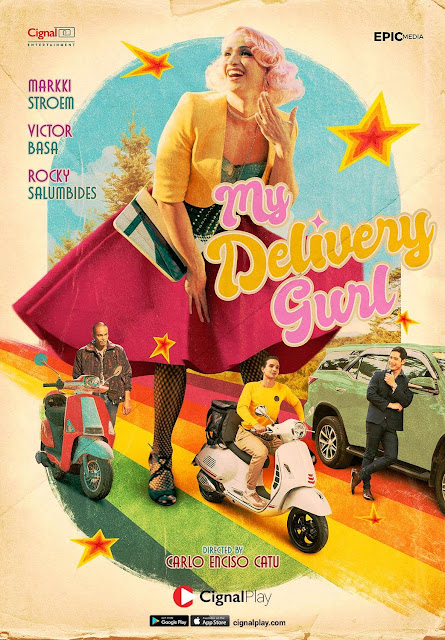 Markki Stroem seem to be on a roll because right after his thought provoking digital series, here goes another one in Cignal Play called My Delivery Gurl. Thing is, he's going to be in drag most of the time and since it's a lead role, he's going to do most of the talking. Think of it as Carrie Bradshaw in a Philippine setting and a drag persona, you'll love Bianca D. Cignal Play has been really active in putting content on the app and this is exciting because it's a little light, certainly entertaining, and quite a lot romantic.

Direk Carlo Catu says "This was formed because I was inspired with RuPaul's drag race. This aims to bring hope, to make you smile, so you can wake up the next day and feel good because you watched something nice. This shows the life of drag queens, that they are people who care for others, they have a life that needs to be in the spotlight, at the end of the day we are human beings who deserve to be loved and appreciated."

Markki says "Drag is a full art form, you have to wear a lot, hip pads, makeup, and heels. This gives individuals to men, gays, lesbian, to anyone, to wear anything and walk in them. I got to walk in Arab Fashion week doing this, so it really bore fruit when I practiced for this show. It's great that I am able to play the roles very well, I would be fine with character acting. If I be typecast, I'd be glad to, we need people to talk for the community and it's important to have people be proud to represent them. It started with heel training, I needed to walk and watched training videos, I even walk in Eastwood with it on, I also talked to drag queens and do this, understand the history, the laws, Paris is Burning, RPDR and more, it just means we have to learn to love each other. It's funny when I post things on my social channels, there's clearly internalized homophobia and prejudice not just with heteros, but even in the LGBTQ community. Bianca will have a love triangle, one who gets inlove with the masculine one, one that loves my feminine persona. This is really going to be amazing. You are all loved in all ways and forms, you can be femme if you want, masculine, a nice body, but still do drag, you can be whoever you want. If you love yourself and understand yourself, all these words should not affect you. Be you. I really don't know what Direk saw with me, but I think this is because I played queer in the past and I am a huge fan of understanding the whole spectrum. There are other colors of the rainbow, it's diverse, learning all of that shouldn't be feared. I walked in 7 inch heels and did it now, you would think that would impossible in the past. Owning it and how there is so much repression, you just have to love it. I wanna be a voice for the LGBTQ community, to love each other for who we are. I think I even identify as Demisexual, we just don't have to put each one of us in boxes. Bianca has different personalities... one day it's Madonna, next day it's Beyonce, body wise it's Cameron Michaels, comedy is Bianca Del Rio, Talent is Adore Delano. I also have Iyah Minah who taught me how to be a lady and walk that way. Soon, I want to be a drag queen with a trans man partner, you never really see that much on usual shows." Rocky Salumbides who plays Jakoy says "You have to watch this to see what I'm doing. Respect should be given to those who deserve it, we shouldn't be looking at their appearances. We can't judge people, I learned a lot doing this film because it evolves. Give them what is due them. I was chosen for this role and through script reading. While direk was writing this, I think he already was thinking of me. The character I played is really based on the script, I didn't want to step on the toes of the creative, you don't really have to overthink this because it's a beautiful script."
Victor Basa plays Boss Sam "I am the owner of the delivery service where Bianca works, there's a lot of illegal things happening but it'll all make sense at the end of the day. Markki is one of the best actors I've worked with. I feel I was handpicked, because of who I am in real life. I feel that's why I was chosen for this role and character. It's a challenge because I came from a long hiatus in acting, I had to work with Markki here because he's supported us during the shoot. I don't know if we will have intimate scenes, it doesn't need to be physical, it's the feelings, there's clear attraction and I think you'll see some of this in the series."
Markki's character has also adopted kids, which serves as his immediate family in the film. EJ Panganiban plays Raver, Pipay Kipay is called Dyosa and Sky Teotico plays Joey Silver.

Pipay Kipay "This series doesn't have any challenge, I am so good here, it's a major one, it doesn't feel like work, it's like a vacation. I love this and it's very close to me, I didn't have to act, it was just me. We all know the pandemic brought out the worst and best in us, we got jailed at home for years, I think need to leave the fear to love, I realized that I'm beautiful, I am much more, I am more capable, I am looking forward to see everyone to be brave, bold, life is short to be just sad, it won't happy tomorrow, it's a process and that's where we'll be ourselves so be patient."

EJ Panganiban says "I learned from Rayver that it won't make you less of a man if you support others, you can love them, be with them. I was really shocked in my first day of shoot, but it's fun and I played along this good movie. It's one of the aspect that you will love with me, even with my putok and shortcomings, you'll still love your straight ally."