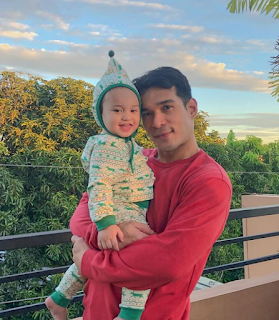 It was a nice afternoon to get to talk to Pancho Magno, one of GMA Artist Center's prized actors.

He worked previously in hit show First Yaya and since the confirmation of its book 2, Pancho will probably reprise his role in First Lady together with new characters and Alice Dixson too.  He always wants to do better every time he does a role.

During our talk, he really was eager to celebrate Christmas together with his family especially the cousins of Sky. He also renewed ties with GMA Artist Center this month and hope he's going to do more projects that are of action genre, they couldn't do much because of the restrictions brought about the pandemic. These days, he's still doing workouts on his social channels and admittedly he's addicted to it because it makes him happy. He's a little shy that everyone comments on his photos when he's just doing a daily routine.

He wants to also do movies so he could have a ranged role, it's difficult but it's something that he would want to do in the near future. It depends on the script of course, but just thinking about it makes him really giddy.

It was so much fun to get to talk with him, and he wishes you watch THE FIRST LADY by first quarter of next year. It's going to be good!